This week, the U.S.S. Discovery returned from the Mirror Universe back to their own dimension. But before they take up their flip-communicators against their next sea of troubles, there’s one thing that happened on the dark side that we need to talk about: Is Michael Burnham a cannibal?

The Mirror Universe was full of dark, brutal stuff. We heard lurid tales of child abuse. We saw some poor jobber explode into a bloody mist (after that, everybody in the room was a “red shirt”). We even got a full Game of Thrones-style throne room showdown, except with a futuristic standing throne that’s better for the core muscles.

But the most brutal act on the dark side was likely the killing and eating of a Kelpien, a humanoid, sapient alien of the same species as Commander Saru, one of the series’s most lovable additions to the Trek extraterrestrial menagerie. Michael chose a Kelpian for the Terran Emperor, played with relish by Michelle Yeoh, without knowing what it was for…

…the Emperor’s chefs chopped the meat off the bones, threw them in a pot, added some broth, maybe a potato…

…Baby, you’ve got a stew going! 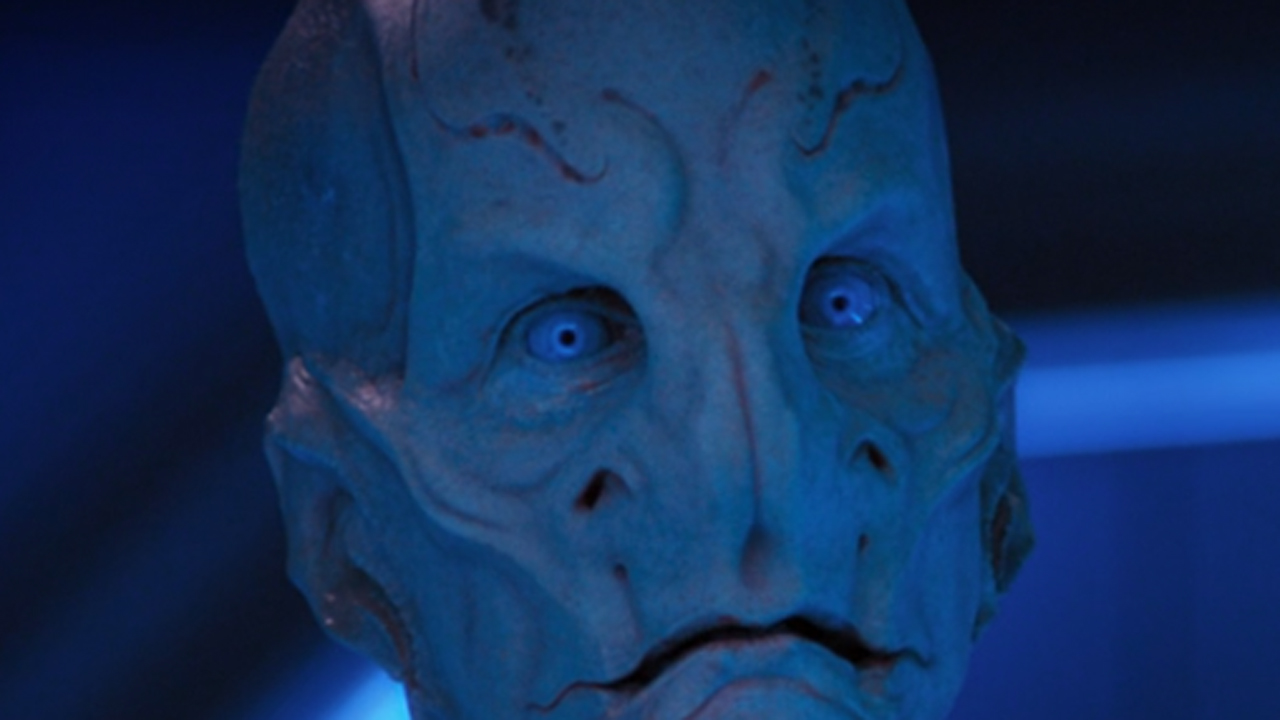 The Emperor feasts on the mystery meat, with Michael quietly sipping soup beside her. In a gross moment, under duress, protagonist Michael Burnham learns she has been eating Kelpian. The evil version of her surrogate mother feeds another choice bit, which she chews and swallows.

And as Saru has told us, before the Federation, his people evolved from livestock and were “hunted, bred and farmed.” In the Mirror Universe — Star Trek’s world-turned-upside-down where everything good is bad — the Kelpians are still prey.

But I can’t recall if we’ve ever seen a “human in a mask-style” Star Trek alien be cannibalized by the “good guys” before. I’m not counting the episode where Troi was a cake and Dr. Crusher drank Commander Riker’s brain through a straw in an android dream sequence. 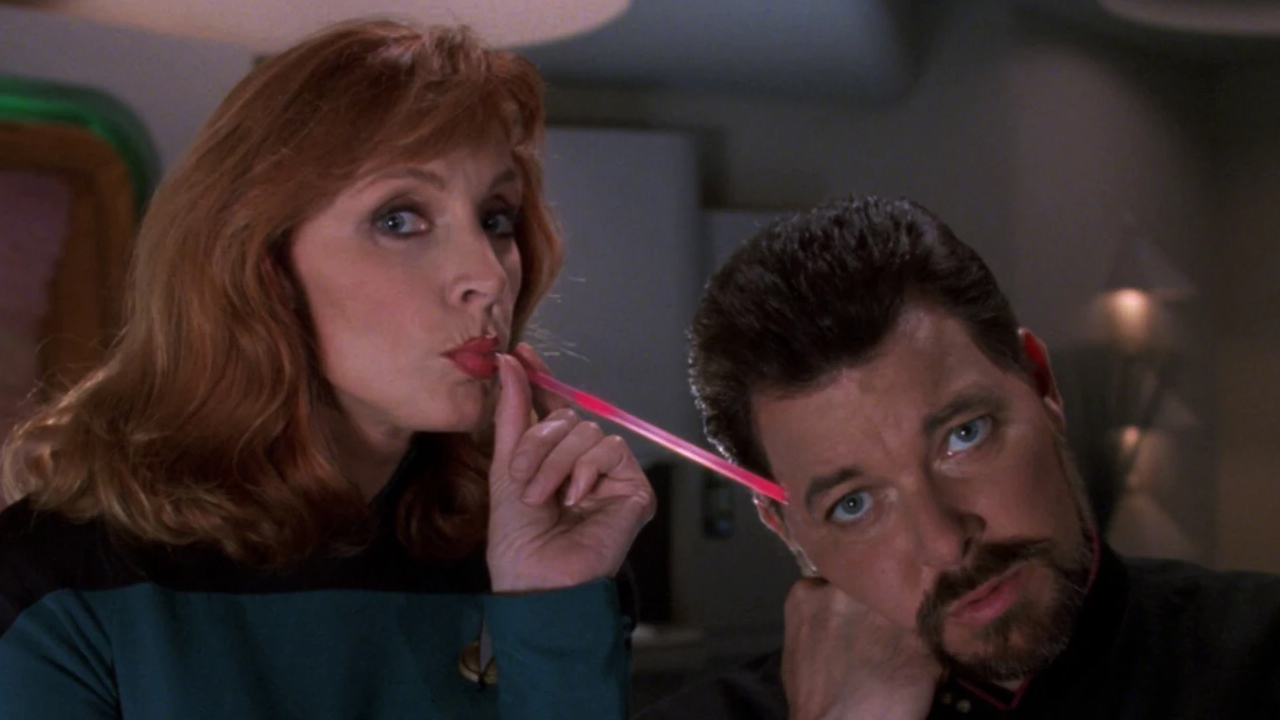 I don’t think there was an episode where Sisko ate Quark and spoke directly to the camera afterward.

I can live with it.

I CAN live with it.

Not even Deep Space Nine is that dark about the necessary steps taken in war.

Seriously, by all rights, this should have major consequences, especially between Burnham and Saru.

But it raises bigger questions, which I had to ask my fellow overthinkers.

Was what Michael Burnham did “cannibalism?” 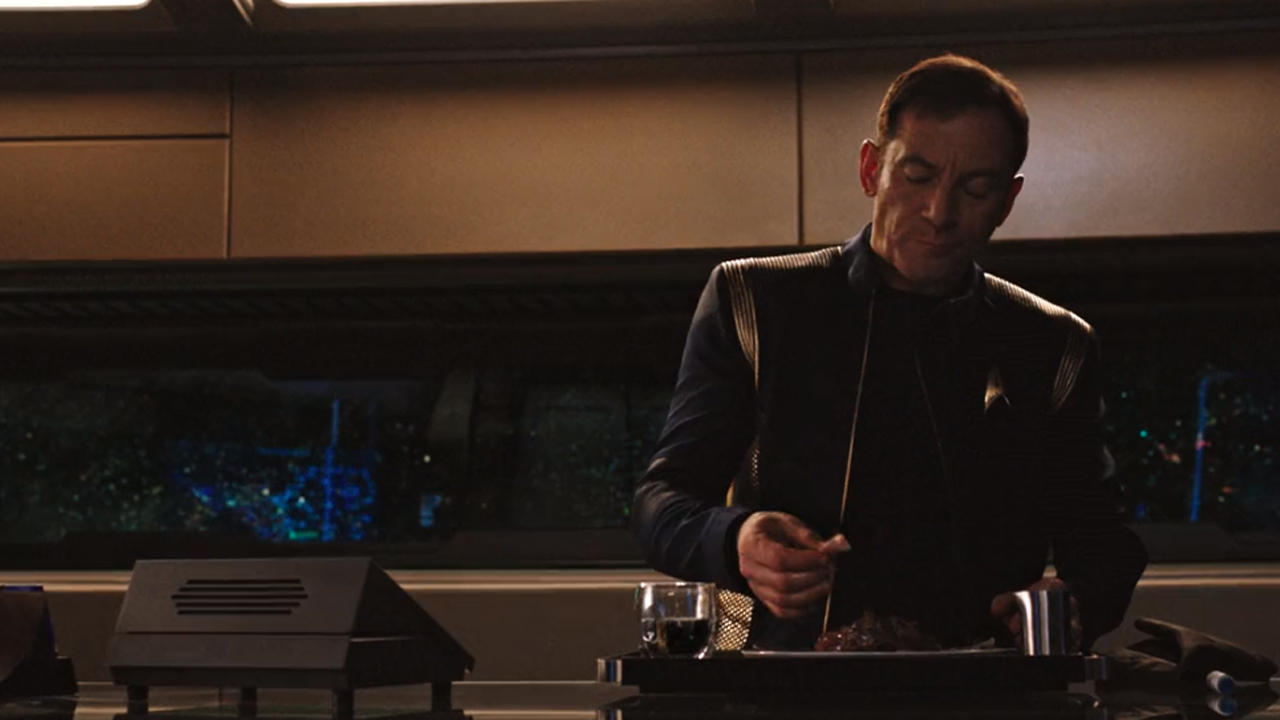 Matthew Wrather: Wait, isn’t it only cannibalism if it’s your own species?

Matthew Belinkie: It’s definitely only cannibalism if it’s your own species!

But Pete, before you get too exercised about the fictional cannibalism on Star Trek, are you aware that many paintings currently on display in museums use a pigment made from ground-up Egyptian mummies?

We stopped making that paint eventually, of course… in the twentieth century… when the last manufacturer ran out of mummies to grind up. My point is that, while having there be big consequences for this would make good dramatic sense, “just sort of pretending that it never happened” is probably the most realistic way for this to pan out.

Fenzel: I did not know that! That’s messed up!

Also, this is interesting since, looking it up, it seems painters might have not actually known the paint had people in it. This is relevant to Discovery, as Michael Burnham eats Kelpien both not knowing what it is and knowing what it is. What’s the difference?

I think the strength of the taboo around cannibalism is really interesting. For some crimes, we tend to think that if you didn’t know what you were doing, you didn’t do ANYTHING wrong. But some — cannibalism, incest… any others? — seem to be polluting in more than just a moral sense.

It doesn’t make sense to me to condemn Michael for eating someone under duress — no more than it makes sense to condemn the various historical incidents of starvation cannibalism. But it’s, like, gross. If I were her boyfriend, I’d want her to brush AND floss before she put her mouth anywhere near me. If my society has any purity rituals, I’d want her to undergo all of them, just to get the stank off.

In this it’s a bit similar to eating poop, like in The Help. We’re meant to understand that the pie actually tasted good! And in that it was thoroughly baked, there’s not actually much of a health concern… and yet. 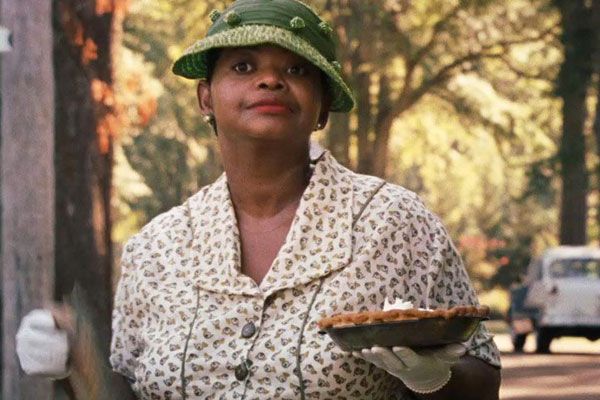 So is cannibalism a moral failing? Or just a HUGE violation of ritual purity? I would tend to think the latter. (Maybe that’s obvious.) But honestly… why is cannibalism even immoral? What’s the harm? On the show, they’re murdering people to eat them, but murdering innocents is already bad, no matter what you do with the carcass. In what sense is EATING people, qua eating, something we’d even want to discourage?

Rosenbaum: Because it denies the presumed difference in quiddity between humans and other animals. 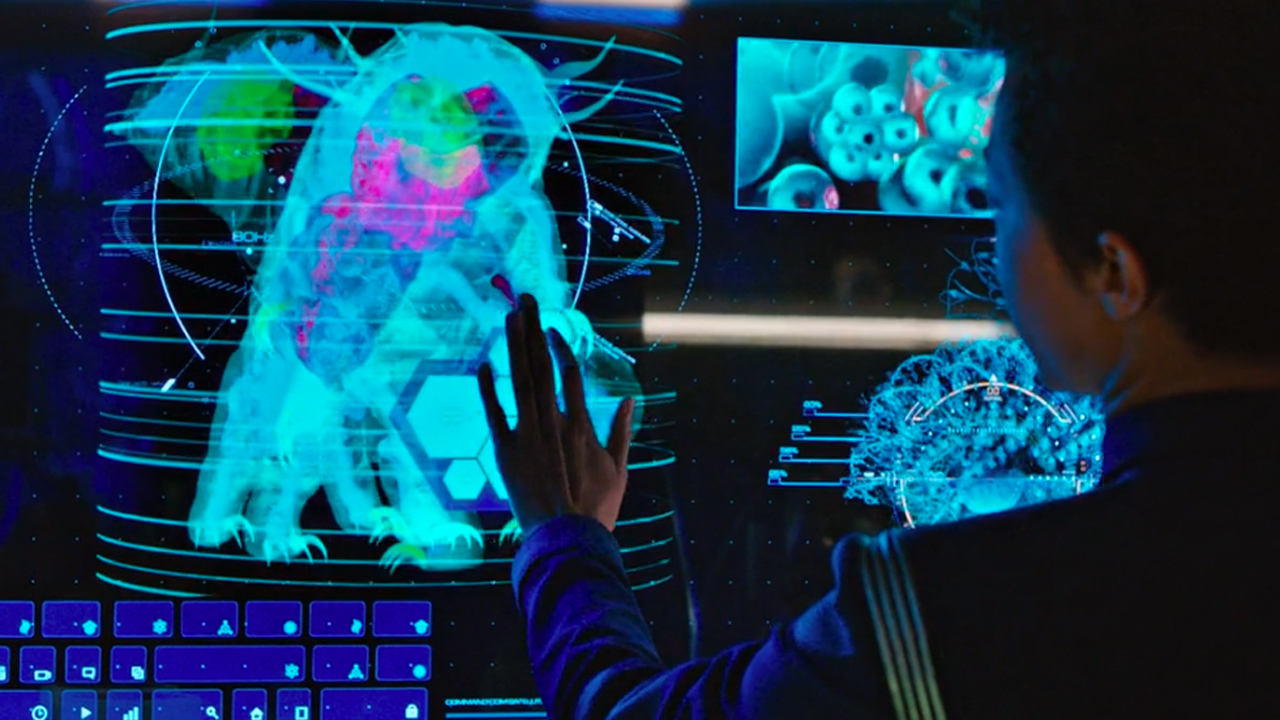 Animals are (or can be) food. Humans can’t – or shouldn’t – because we suppose ourselves to be ontologically superior to other animals, of having a kind of higher, even infinite, metaphysical value. Eating a person is insulting to that person, because it implies they were no more than an animal to the one consuming them. So cannibalism is something that degrades the currency of human life, and no civilization can withstand that for very long.

I can see why a human-supremacist empire would encourage eating other sentient species for that exact reason. Then again, we do know that Kelpiens were bred and farmed as livestock millennia ago. So maybe they’re just super tasty.

The nature of this sin matters because it feels out of character for Michael. Michael Burnham stridently defends the rights of exploited life forms. She previously insisted on releasing the tardigrade from captivity out of respect for it as a lifeform. That act jeopardized the whole war effort. But Michael’s conviction insisted it was the right thing to do.

And yet, she didn’t even protest when she found out she was eating a sentient being. I get the danger of the situation, but space-commander adventures do somewhat suspend the severity of that danger.

And in space-commander-style, the 100% correct line is “Sorry, I’m not hungry.” 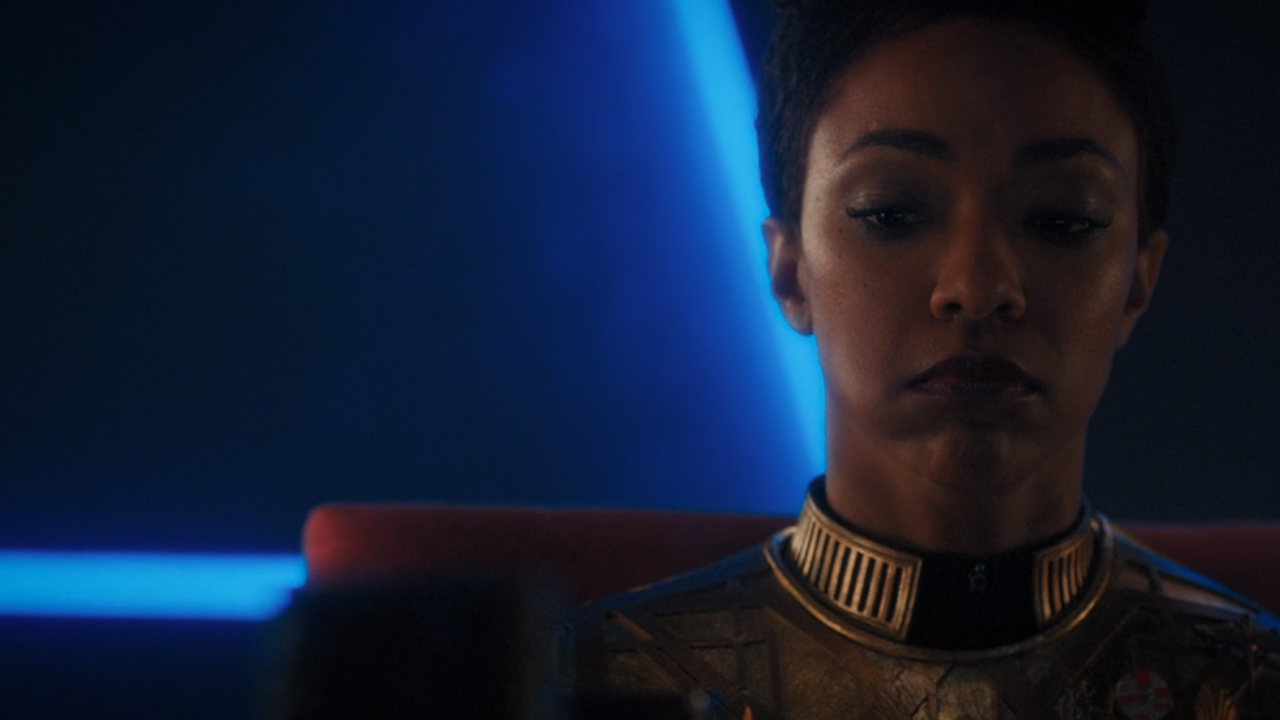 I  hope the show has the courage to actually let this act have consequences. Previously I’d have been skeptical, as the show seemed to be dropping a lot of details episode to episode. But we saw Michelle Yeoh come back, and we even saw Landry come back.

Now that we know the show is capable of the long game, maybe this will come back too. And maybe the tardigrade will return, bringing back to this theme of human respect for other species, rather than exploitation.

And if it returns, it won’t just be us talking hypothetically about the nature of Michael’s sins. She might have to face the moral truth of her act with one of her closest friends, whom she has betrayed before: Saru, her own captain. And not her dinner.

2 Comments on “Star Trek Discovery — Is Michael Burnham a Cannibal?”