I’m still not on board (starship pun!) with this new show. It’s certainly improved since the two-part pilot, but I don’t really see how the problems (with continuity, anachronisms, etc) can ever really be solved. Unless the writers have something really revolutionary up their sleeves, this might be doomed to be another failure for Trek. I mean, in my opinion, of course. Lots of people like the JJverse Trek movies. Somebody must even like Nemesis. I happen to have liked Enterprise more than most people did, although it also had huge problems right out the gate and was only partly rehabilitated by the hiring of the Reeves-Stevenses for the show’s fourth season to try to get things back on track. By then it was already too late to be saved, and that was back when television was a lot more forgiving than it is today, here in the midst of Peak TV. 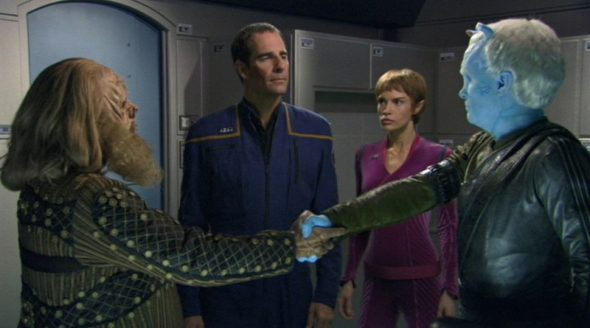 The stuff in Discovery that seems most promising is probably stuff that isn’t going to go the way that I think would make it most interesting, but that’s what I want to talk about for a little while here. The A-plot of “Into the Forest I Go,” the mid-season finale, involves Burnham and Tyler secretly boarding the Klingon sarcophagus ship to install devices that would allow Discovery to detect the ship even through its cloaking device, while Stamets coordinates over a hundred spore-drive jumps in order to rapidly gather that data before the Klingons have time to destroy the planet Pahvo.

Only briefly touched on, though with surprising sensitivity, is Tyler’s symptoms of post-traumatic stress disorder resulting from his long imprisonment and torture – including sexual abuse – by the Klingon captain L’Rell. While on board the Klingon ship in this episode, Tyler experiences paralyzing flashbacks and, later on with Burnham back on Discovery, he’s deeply and realistically upset when recounting some of the trauma he endured.

What’s too bad is that the popular fan theory that Tyler is actually the Klingon Voq (surgically-altered and mentally reprogrammed to simulate the real Lt. Ash Tyler, and working as a sleeper agent for the Klingons) is probably true. If that’s the case, it takes significant wind out of the sails of this subplot. Starfleet officers have been known to go through some difficult stuff and come through it perfectly fine. Picard was abducted, violated, and used by the Borg – this was only shown as having serious psychological repercussions in one episode, where he visits with his brother’s family on Earth. There’s a little bit of it in First Contact but that’s it. Picard’s capture and torture at the hands of the Cardassians goes completely unreflected-on. Chief O’Brien has gone through more war, abuse, and torture than any fifty other officers, but the effects are never felt past the end of any one episode. Nog had some phantom limb syndrome after losing his leg in the war, but nothing a few days in the holodeck couldn’t fix. 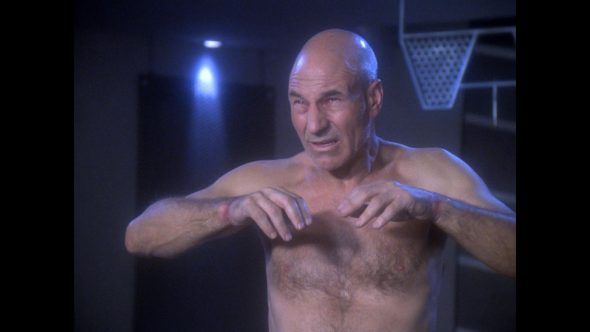 If Tyler is meant to be part of Discovery for the long-haul, having a character dealing with PTSD over a period of several years (if the show lasts that long), would be something truly new and interesting. And there’s plenty of room for nuance here too: not only flashbacks, nightmares, and emotional imbalance, but also Tyler’s misguided feelings of guilt for having “encouraged” L’Rell’s “sick obsession” with him to save his own life, something that real-life victims of abuse often struggle with. On the other side of things, with L’Rell herself now a prisoner on the Discovery, there’s a potential for delving into some really difficult and potentially disturbing, but very relevant, issues here: we actually don’t know anything about Klingon cultural ideas around consent. Klingon mating rituals are notoriously violent at the best of times, maybe from L’Rell’s point of view, she wasn’t doing anything wrong – not just in the sense that Tyler, because he’s human, doesn’t deserve the same consideration as a fellow Klingon would, but Klingon sexual mores could be genuinely alien. As a metaphor, that would definitely be something: many human abusers don’t think they’ve done anything wrong, no matter how awful their behavior; whether it’s because they believe their victim “asked for it,” because they feel as if they’re somehow “getting even” or that they’re simply entitled to take what they want, a lot of monsters don’t know that they’re monsters, don’t or can’t acknowledge that they’ve committed any evil. In other words, what if L’Rell thought that Tyler was into it? In no way could L’Rell ever herself be portrayed as a victim in this scenario, but she could still show that she is a person with justifications and logic behind her actions – not legitimate justifications, surely. Not any sort of sensible logic. But not a purely two-dimensional trauma factory either. We already know that physical pain – causing it and enduring it – is a major motif in the way Star Trek has portrayed Klingon philosophy and culture. This would be a way to dig into some of the implications of that, to problematize that portrayal in a way that science fiction at its best is perfectly equipped to investigate.

Unfortunately, though, most probably Tyler is Voq. This would be a lot less interesting than Tyler simply being some kind of brainwashed Manchurian Candidate (which, of course, they already did in the TNG episode “The Mind’s Eye”), not only because the fans have already guessed it, but also because if Tyler were to survive the revelation it would add additional psychological depth to the trauma inflicted on him by the Klingons. Even worse would be if Tyler’s memories of being raped by L’Rell turn out to be Voq’s memories of some perfectly normal Klingon mating. 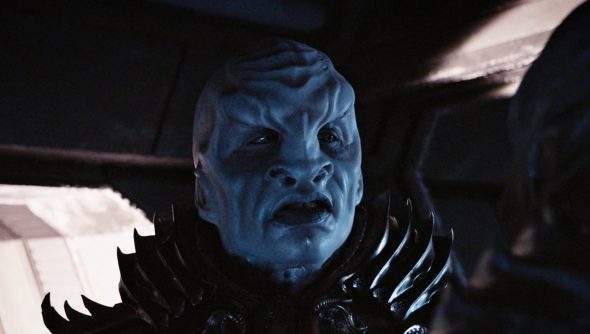 What I could see happening – and what I hope is what the show is going to do, assuming that Tyler = Voq is already inevitable – is for the implanted human personality to remain intact even after the original Klingon personality reemerges, putting Voq/Tyler in the position of being forced to struggle between his “real” Klingon self, and the “fake” human self that despises everything the Klingons stand for, between suffering all that senseless trauma and being part of the side that ordered it in the first place. Will he choose one over the other? Will he somehow be able to reconcile the two?

That would be some good Star Trek.