Ever since last year’s election, watching Parks and Recreation has become a little harder. What used to feel warm and comforting has started to look naive. We went from a fictional world in which women were respected and able to achieve so much into a real one where many of us feel powerless and overwhelmed for what feels like eternity. I believe Mike Schur feels the same way, because just as these things were happening, he came up with something that feels a lot more appropriate to our current reality: The Good Place. In The Good Place, we’re in hell, we know it, but we can still find people to love and help and form a community with. In fact, the motto of The Good Place could very easily be “Guys! This is hell. But here’s how we can move forward.” Which, you know, kind of works with our current circumstances as well. 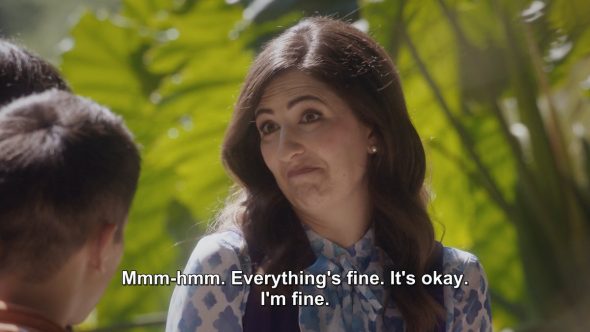 Last week’s episode was a long conversation between Janet and Michael that ended with him realizing she is his friend and he cares about her. So he sent her to Eleanor, hoping she could give Janet some advice on how to get over Jason. Eleanor suggested a rebound guy, but instead of hooking up with Chidi or Michael, Janet created her own: Derek! This episode began by showing us Derek malfunctioning hilariously in Michael’s office. Michael is understandably worried that Derek’s presence in the neighborhood will expose his secret, so he wants Janet to get rid of him, but she insists he is helping her get over Jason. Which means Michael has to find a way to make Derek go away while still acting ethically. In an attempt to keep Derek a secret, he shows up at Tahani’s house and offers them a little weekend trip “at a private campsite at the edge of the neighborhood” so he can get them out of the way. 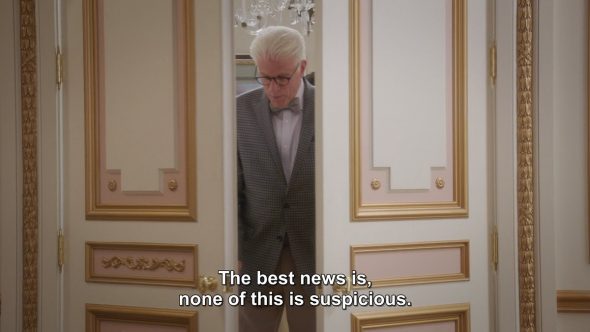 Meanwhile at Eleanor’s house, we see her watching the Cannonball Run 2 tape longingly. It looks like the revelation that she was once in love with Chidi has gotten her to fall in love with him again, and when he walks into the room she tries to get the tape out as fast as possible and tries to play it cool by acting weird and slightly hyper, which he notices. At this point, Michael shows up and asks Chidi “How do ethical philosophers feel about murder?” to which he replies “It’s frowned upon” which is something he’s said before but it’s funny every time. And then Michael sounds very excited, like he just found an awesome loophole, and says “What if the reason you want to murder someone is to make your life easier? That’s ok right?” which is one of those great Ted Danson moments. At this point, Chidi and Eleanor don’t know about Derek yet, so Michael calls Janet and Derek introduces himself to them. Janet explains that Derek is her rebound guy and Eleanor realizes this is her doing and she feels bad, so Janet offers her her own boyfriend and says “Based on your last 10,000 comments, it would be Stone Cold Steve Austin’s head on Tahani’s body” and Eleanor replies “Or vice versa!” with so much excitement you would think she just got another shrimp machine. 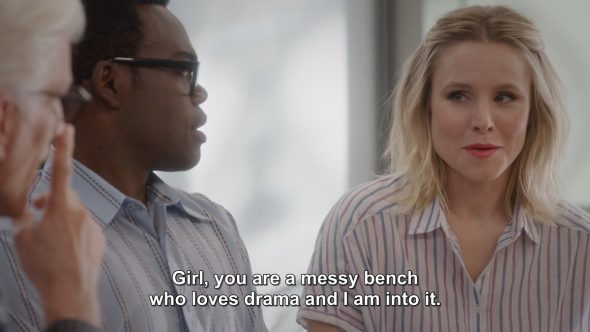 Back to the plan: Michael wants to just kill Derek, but Eleanor points out that they need him around to keep Janet from glitching. So he suggests that they tell Jason and Tahani about Jason’s previous marriage to Janet, causing them to break up which would make Derek unnecessary. But Chidi thinks breaking up a happy couple is also not ok because it would cause them pain. Then Michael points out that getting caught and sent to the real Bad Place would also cause everyone pain, so touché! Eventually they settle on telling Janet that she can keep Derek as long as she keeps him hidden from everyone else, but when they call her to tell her about the new plan they find them mid-fight, screaming at each other over Derek’s insecurity and the fact that he’s always in her void.

While all of this is happening, Jason and Tahani are having a lovely time in their little campsite, playing both proper croquet and Jason’s version of it—hitting a ball that’s sitting inside of a glass, breaking the glass and sending the ball flying, while yelling “Jaguars rule!” Or as Tahani says it, “The Jaguars are very good!” Then they raise the stakes and make a beautiful champagne tower, then proceed to destroy it! Tahani has really gone over to the dark side. She makes them both the most beautiful flower crowns and he asks her how she learned how to make them. She tells him she went to the Hartfordshire Academy for Expressionless Girls, a finishing school, before moving on to Oxford and the Sorbonne, of course. Then she asks him where he went to school, and he says “I went to Lynyrd Skynyrd High School in Northeast Jacksonville, which was really just a bunch of tugboats tied together” in a junk yard. Tahani is appropriately horrified but also envious of how free Jason is. She says she never had a friend she could be herself around and he takes that as an opportunity to propose to her. He suggests they get married by the beach, where all good things happen, like Jersey Shore and Saving Private Ryan.

Derek is now hanging out on top of a tree as Chidi, Michael, and Eleanor desperately try to get him to come down when Janet shows up and invites everyone to the wedding, almost breaking into tears. This makes Derek jealous so they start fighting once again and disappear into the void. At this point Michael is desperate and says they have to stop the wedding from happening. Chidi brings up the doctrine of double effect as a kind of loophole that enables them to remain ethical while still causing pain to Jason and Tahani and, by extension, Derek. In order to do so, they need to go about it with the sole intention of saving Jason and Tahani from the pain of eventually finding out about Jason’s earlier marriage to Janet. 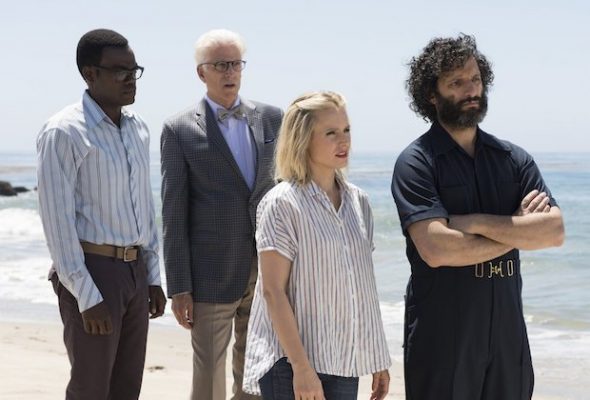 They show up at the beach and Eleanor is thrilled she gets to dramatically stop a wedding from happening. She tells them about Jason and Janet’s marriage, explains the reason why Janet has been glitching, and introduces them to Derek. This leads to Tahani almost fainting and asking Janet for her tizzy couch, which shows up just in time to catch her. Eleanor thinks Michael should just reboot everybody, figuring Tahani and Jason’s relationship was a fluke and almost letting it slip that she would then also forget about how she’s in love with Chidi. Oops! But Michael says they’ve come too far and their only real option is to reboot Janet or Derek. Chidi thinks that rebooting either of them is not ethically permissible, and would only be ok if it were an unintended consequence of a different action. Janet and Derek start arguing again and we find out that he has wind chimes instead of a penis! Janet is angry because she feels confused even though she’s supposed to know everything, so Eleanor takes her aside and tells her that her earlier advice was wrong, and that the only way to get over real heartbreak is to sit with your feelings, talk about them, and power through. Janet understands, so she tells Derek she never should have made him and that he needs to go away, and so they start making out—that’s the only way she can reabsorb the thoughts and emotions she imbued him with. And here come the wind chimes!

Now we’re back at Eleanor’s house, as Derek is put into a steamer trunk filled with hay. He’s still talking and Janet explains that this is as dead as he gets, and he’s in sort of a sleep mode. She says that now that she’s understand what she’s going through emotionally she won’t glitch anymore. Cut to Jason and Tahani in bed, talking about how they had rushed into marriage. Tahani asks Jason about the first person he ever kissed and… it wasn’t exactly a person. She decides she’s heard enough, he makes a cute joke about reabsorption and they cuddle.

Eleanor decides to finally tell Chidi about how they had fallen in love in past reboots, so she shows him the tape. He’s shocked at how easily he was able to tell her he loves her and she asks if he still feels that way about her. He says he doesn’t and she looks sad and disappointed but tries to hide it from him. Michael shows up and they have a little chat. He wants to know if being ethical ever gets easier. She says he should ask Chidi but he thinks she can help because she’s the one who always gave up on anything when it got hard, and yet she’s sticking with her attempts to become a better person now. We find out that she once abandoned her car because it needed an oil change, which is bad even for her. She tells him that trying to be a good person makes that nagging inner voice that tells her to do better go away, and she likes it better this way. Michael thanks her for helping and she’s impressed that he came over just to chat, like a real human person and everything! So he goes back to his office and finds Shawn there, flipping through a huge pile of paper. Oh no! And the show leaves us with this cliffhanger until it comes back in January of next year, because of something called football, ugh. How are you dealing with this loss? I’m not doing so great, guys. 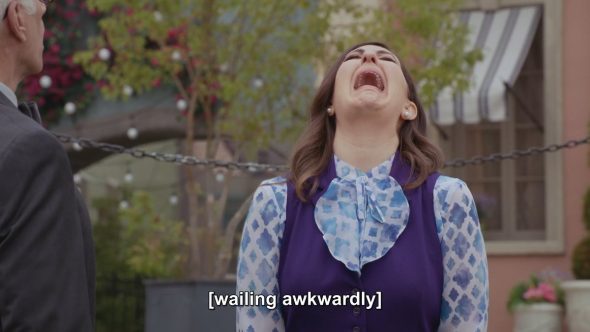 (Special thanks to the @nocontextgoodplace twitter for all these great stills!)

Philosophers Mentioned: None! But the doctrine of double effect has its origins in “Thomas Aquinas‘s treatment of homicidal self-defense, in his work Summa Theologica,” according to my dear friend Wikipedia.

Jacksonville References: Jaguars rule! The Jaguars are very good! Lynyrd Skynyrd High School! So many to choose from…

Horrible Things Eleanor Did While Still Alive: She took some olives from a salad bar without paying, then spit the pits on the floor, which caused an old man to trip and fall, and then while everyone was presumably rushing to help him she used that as an opportunity to go steal more olives. Classic Eleanor!