This week’s episode took the trolley problem, explained it, enacted it, and then became a form of it. It opened on one of Chidi’s classes, as he tried to explain it with help from a diorama. After it became clear that Michael couldn’t (or wouldn’t) relate to it, Michael suggested they make it a little more realistic, by creating a simulation of it with fake people who feel real pain. Fun! Once Michael plunges Chidi into the speeding train, Chidi enters his own trolley problem within a trolley problem: the only way to get through to Michael is by allowing himself to become morally compromised. 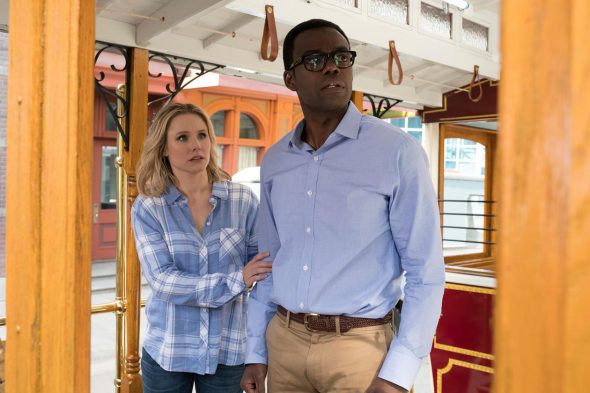 Chidi can’t back out of the trolley problem, because doing so would mean breaking his promise to teach Michael how to become a better person/worse demon. (Also because he literally can’t get out of it, only Michael can turn the simulation on and off). But by staying in the “game” and “playing” it, he is forced to kill people over and over again, and in an extra evil twist, explain to their relatives why he did it. At this point, Eleanor figures out that Michael is torturing them once again, but he’s just letting off some steam this time around, so he doesn’t mind it. Meanwhile, Chidi is in hell—I mean, he never left. And Michael’s torture is even more effective now, which is interesting because this season has been showing us how Michael is the one who seemed to be suffering the most, but now that he’s on their team he’s actually gotten better at the whole torture thing.

The first time in the trolley simulation, Chidi ends up killing the five workers by default because he couldn’t make up his mind in time to actually make a choice. (Classic Chidi!) The second time around, the person on the other track is Henry, his Australian boot buddy, and he’s there because his boot got stuck in the track! So when he dies, both his blood and his boot fly into Chidi’s face. We know from his flashbacks that Chidi’s problem has always been his inability to make definitive choices. This stems from the fact that he’s always looking at any situation from literally every possible angle, which means he’s hyper aware that there is no right answer.

Now he’s being forced to make choices in a concrete way, but not really, because it’s the afterlife and Michael has created all the people in these scenarios. So it’s like a VR version of philosophical praxis. Which is interesting because if theory is platonic and real praxis is earthly, then VR praxis is like a limbo-y purgatory? Which is basically what the post-Team Cockroach Bad Place has become. I mean, we didn’t even see Vicky or any of the demons this episode. The four humans, Janet, and Michael are set aside in their own little world. 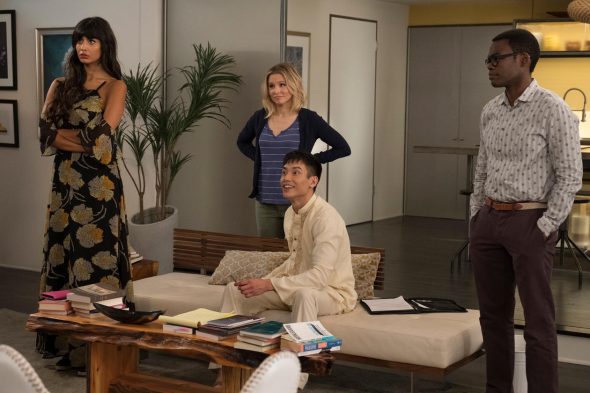 The other storyline in this episode deals with Jason and Tahani’s secret relationship. They are still ”pounding it out“ and Jason wants them to be open about their relationship but Tahani is too embarrassed to tell any other humans about it. She goes by the Duke rule, named after the “minimum acceptable university and rank of nobility” she will accept in a suitor. Unless, of course, he’s the non-famous Hemsworth brother. She’s also bothered by the fact that Jason doesn’t have a job “in the sad way, not in the good, rich way.” Jason suggests she should talk to someone about their relationship and since she doesn’t want anyone to know about it, she calls Janet.

Janet explains to her that she is not a therapist but after reading every book ever written about human psychotherapy and wearing her therapist glasses, she basically becomes one. Jason shows up after a while and demands his own therapy session. He tells Janet that Tahani’s body is “soft and smooth, like a bunch of water balloons” and that he is sad because Tahani never tells him he’s pretty and he thinks she’s embarrassed by him because he’s not a “scientist who forecloses on banks,” which might be my favorite Jason line yet. 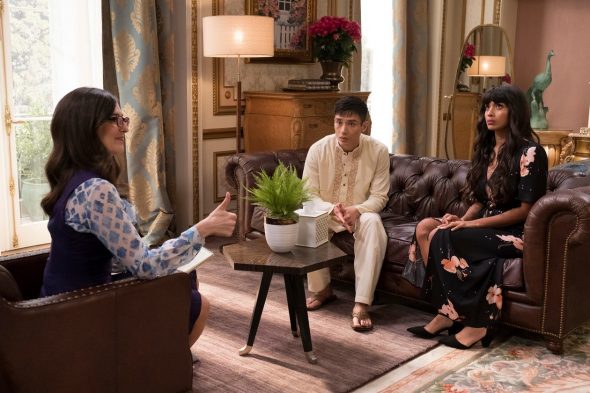 Tahani comes in and decides to turn their therapy sessions into couples counseling, and suddenly Janet’s thumb becomes detached from her hand and starts floating like a balloon. Which is what Jason just compared Tahani’s body to. Coincidence? Eventually they come to an agreement: Jason will keep their relationship on the DL if Tahani agrees to grab his butt in public once a week, which can be easily excused because apparently he sits on gum all the time. Once they start to kiss, Janet says “I’m happy for you guys” and then vomits a live frog. Does this version of Janet still remember the time she married Jason? Is that what’s going on?

We cut to Michael and Eleanor laughing at awful stuff together. Eleanor is an interesting mix of good and bad at this point, and this scene shows it in a very enjoyable way. But the real reason she’s there is because she figured out why Michael was torturing Chidi. It wasn’t just for fun, he was feeling insecure about how bad he is at ethics and so he was lashing out, or what she calls “pulling an Eleanor.” They bond over their shirty behaviors, until Eleanor realizes that being so similar to a demon is questionable at best. She tells him he needs to apologize to Chidi so he shows up at Eleanor’s house, which has become Team Cockroach’s HQ, and offers them all opposite tortures, which is what he calls presents. Tahani gets the world’s biggest diamond, a.k.a. “worthless space garbage.” Eleanor gets a never-ending shrimp dispensary, Jason gets a Pikachu balloon that he immediately pops, and Chidi gets a never-before-seen notebook that belonged to Immanuel Kant.

Chidi throws it in the trash and calls Michael’s apology a bribe, which is 100% accurate, so Michael apologizes, first by being sarcastic about it, and then by being sincere. But how sincere, though? Ted Danson is so good in this scene, you really can’t tell if he’s being actually honest or just playing Chidi by faking it very well. It’s really fun to watch! 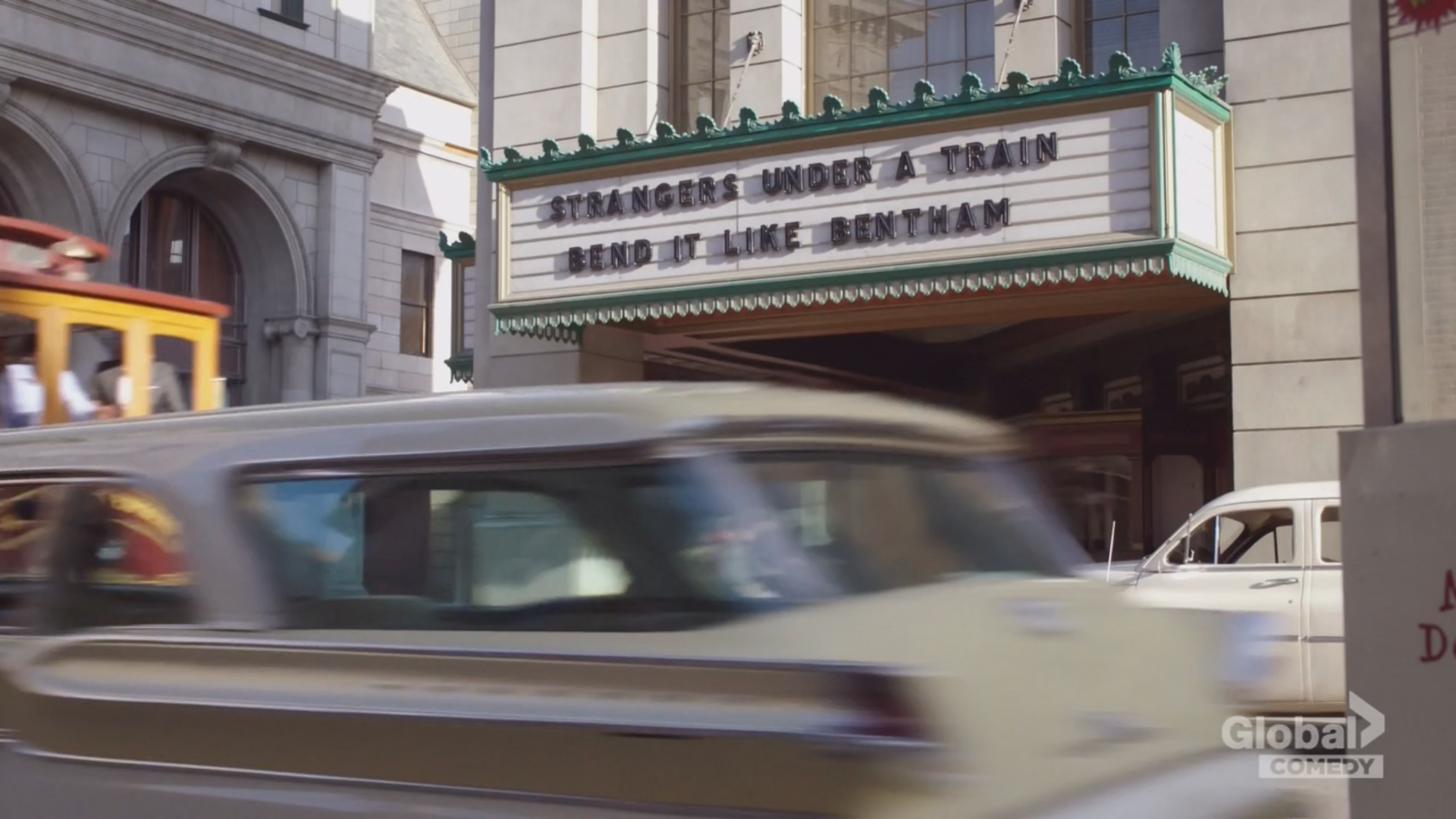 At the end of the episode, we jump forward a month and watch as Tahani thanks Janet for all the couples counseling, and as soon as Janet says “Congratulations, I am very happy for the both of you” an earthquake happens. Could it be the ride or die protocol? Also, the neighborhood might collapse. Ok, bye!

Horrible Things Eleanor Did While Still Alive: She posted her cousin’s credit card number on Reddit because she said Eleanor looked tired.