So far this season, Star Trek: Discovery has drawn takes mostly as the “anti-Trek,” replacing the comforting family dynamic of captain and crew with an edgier take on institutional alienation.

Starfleet has warmongers, mutineers, prisons, and slave labor, just like the real world. Captains can be imperial, distant figures, not just surrogate fathers and mothers. The wrong side of ethnic and gender privilege trades in familiar sorts of entrenched hostility and disadvantage, not just in holograms or time travel, but in Starfleet itself (even if the underlying reasons are a bit symbolic). You’re not in Roddenberry territory anymore when you’ve got a Black woman riding in the back of a bus.

But “The Butcher’s Knife Cares Not for the Lamb’s Cry,” despite its savage name, is the Trek-iest Discovery yet.

A Federation mining colony sends a distress call. Someone must save the innocent civilians and dilithium crystals! Only the Discovery can get there fast enough to help. Captian Lorca has to weigh the need for action against the realities of the situation and the safety of his crew. He raises his voice as his people do things better and faster.

Meanwhile, Michael posits that Captain Lorca’s deadly alien beast (“Ripper”) is not a born killer, but in fact a docile fungivore, lashing out only in self-defense. She follows her reasoning and observation to a critical insight that unlocks the true potential of the spore drive.

The personal ethical journey in the B plot comes around to save the A plot. Science happens, the Klingons blow up, and the good guys win.

We also see discussions of cannibalism, a starving ship betray its captain for food, and the bloody and fatal mutilation of a main character acting out of cruel, abject stupidity. 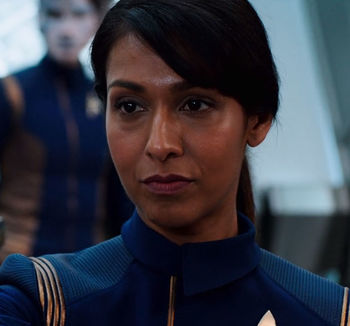 RIP Landry. You were no Tasha Yar, but it was no sludge monster.

Okay, so, two Treks forward, one Trek back.

It’s Not What It Seems, Unless It Seems Bad

The episode danced to an old Trek tune: things are not what they seem. A new uniform is not really a blank slate. An alien animal is not really a monster. A box from a friend you got murdered might not really be a reason for shame or sadness. 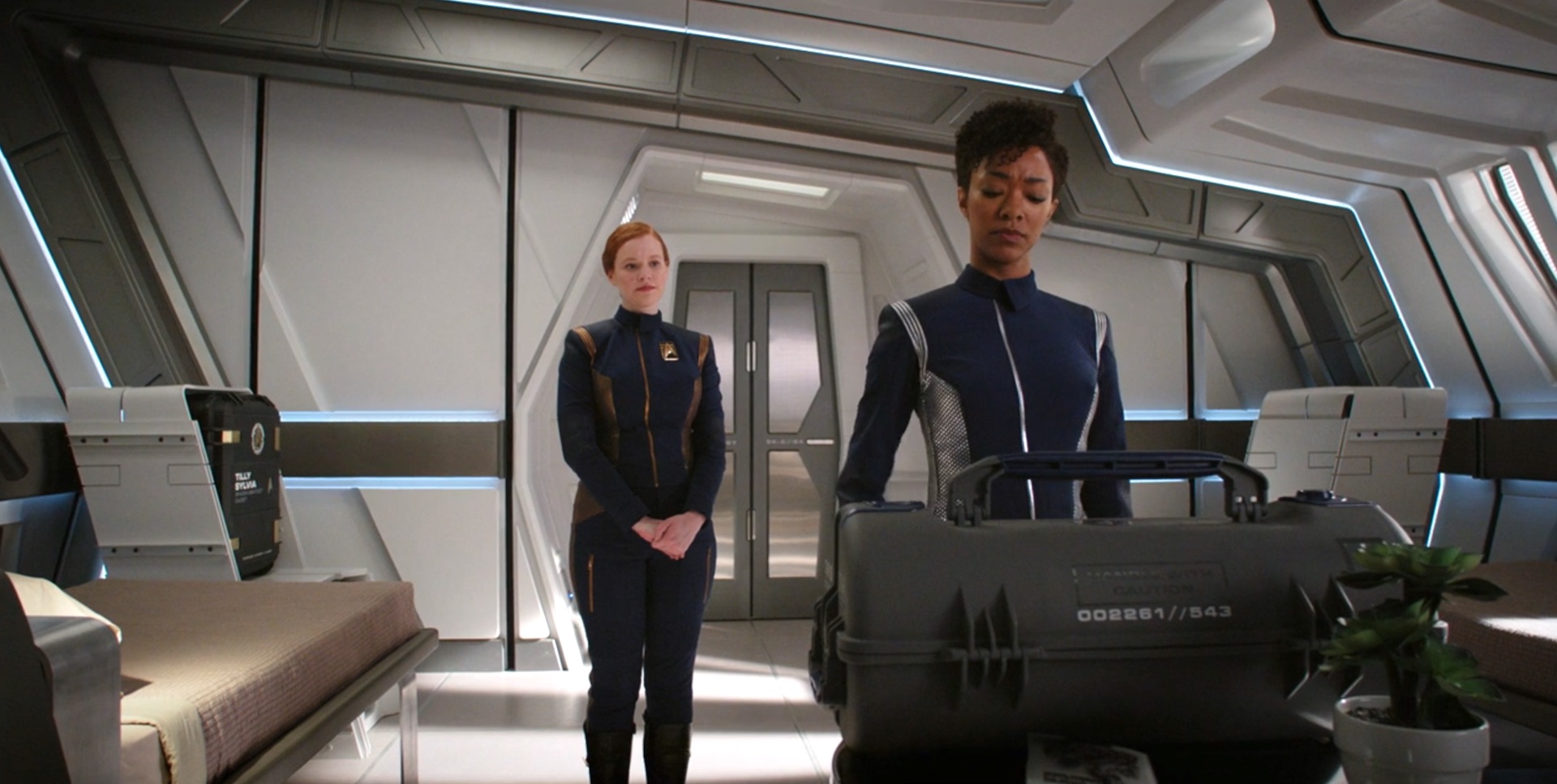 It’s not that the world is mysterious, just that first impressions are often wrong, especially if they lean toward hostility. Take that second look. Instead, on Star Trek, dismissing first impressions tends to follow from two axioms:

A comfortable Trek story tends to downplay the difference between the two, but it can be considerable. On one hand, emotional assumptions about how the world works gave us the doctrine of the four humors and the Earth at the center of the universe. On the other, many a Lieutenant Commander has endeared themselves to prosthetic-faced strangers not by objectivity, but by the presupposition that they must be Good People.

In Trek tradition, the universe is, by and large, Good People. Nasty folks have something wrong with them; it’s not the state of nature.

An Enterprise By Any Other Name

But this is Discovery. And so sequences that in other Trek shows might have passed with irritation instead raise the prospect of real conflict.

On the verge of a breakthrough, Michael finds a clever way to test Ripper’s supposed hostile intent, using First Officer Saru’s “threat ganglia.” Saru’s people, the Kelpiens, evolved from prey animals and have evolved a refined sense for imminent death. Michael figures by getting Saru into the same room as Ripper without Saru knowing, Saru’s natural senses will tip off whether the Ripper is a natural predator, or a more passive animal lashing out because of circumstances.

So she brings Saru into the lab under the pretense of repairing their damaged collegial friendship with kind words and compliments, only to reveal, when Saru’s ganglia stayed retracted, that she has cracked the case. 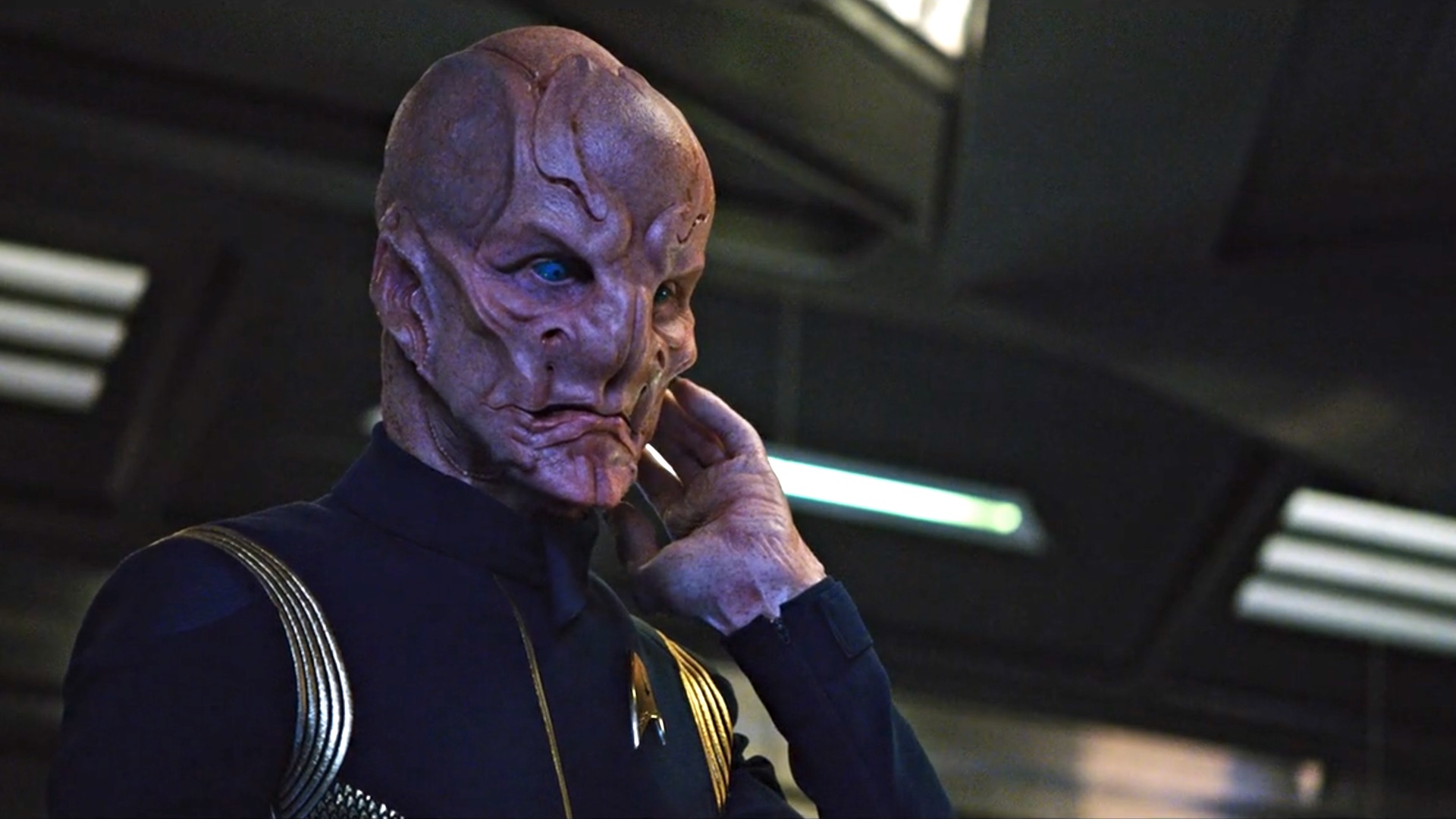 Saru takes it as an affront. Michael’s compliments to get him in the room must have been insincere. He is angry she has manipulated him. And for her side, while she probably meant the nice things she said, there’s little reason she couldn’t have conducted her experiment more considerately. Either could have been nicer, but they were not. The people in this universe are not that good.

And yet, there’s an interesting interpretive loop here that feels like a slightly new direction for Discovery. The scene does feel tense, a bit dark, like relationships between crewmates are at stake in a way they aren’t often in Trek. Still, we can probably safely assume relationship isn’t actually at risk. This appears to be a minor conversation in a monster of the week episode.

And if that’s the case, plotting it point by point, the scene functions almost exactly the same as any number of conventional scenes between any number of other Trek characters, like Garek and O’Brien on Deep Space Nine or B’elanna Torres and anybody else in Voyager.

As the deservedly-dead Landry tells Michael before biting it, it’s not what you are, it’s what you can do. And these scenes that seem to try to defy expectations  kinda function like, well, Stark Trek.

Maybe Discovery has been gearing up to be a regular Star Trek show this whole time. Perhaps the differences are going to prove to be not rejections of comfortable traditions, but superficial variations on well-worn themes.

For example, in this episode, Captain Lorca argues with a pissy Lt. Stamets that the spore drive needs to be ready faster than expected despite his protests. It might take a moment to realize that this isn’t a “People in real life don’t get along” conversation, it was a “I need warp drive now, Mr. Scott!” “Captain, I can’t do it! I don’t have the power!” conversation.

Or how when Captain Lorca wants the ship to proceed on his course, he says “Go.” The Space-Commander appropriate flourish is a bit syncopated, but he knows where his bread is buttered.

Now that’s how you “Go” a spaceship!

The final gift of Captain Georgiou’s telescope is the kind Trek-ish touch that Discovery has thrown in since the pilot. So far, these have seemed clunky and out of sync with the tone of the show. But if the show is converging more on Trek, they may start feeling less forced. Also given the circumstances of Captain Georgiou’s death, the probate on that telescope was probably really complicated.

It’s Not a Doll, It’s an Action Figure

The Starfleet plots manage to push through this dark-ish, gritty-ish tone to tout the benefits of being nice to strangers. But the darker, grittier Klingon plot warns of the perils of trust, the folly of weakness. As the new Trek credo goes: “To explore strange new worlds, to seek out new life and new civilizations, and to have a plan to kill everyone you meet.” 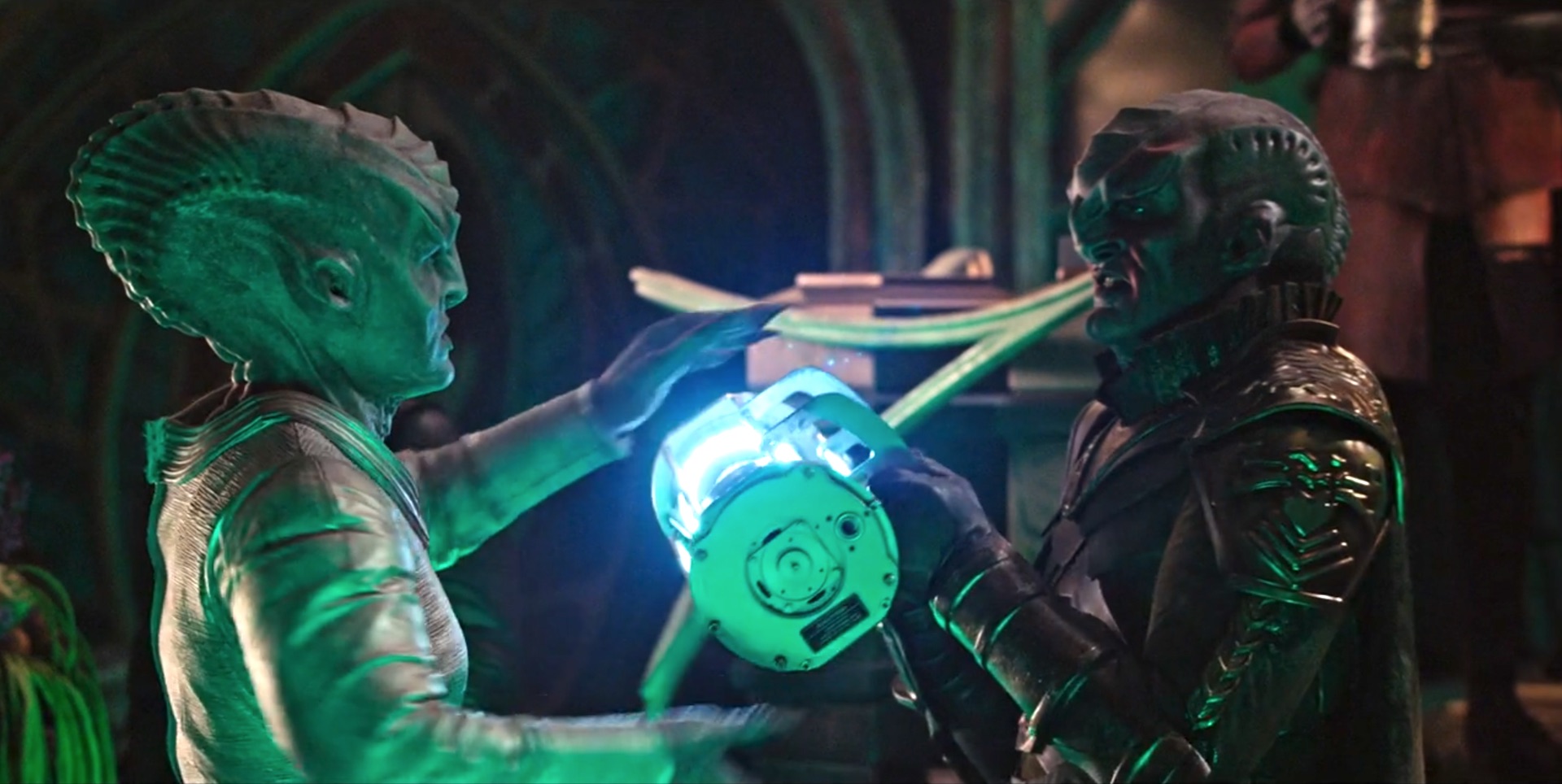 Voq, the albino torchbearer of the Klingon unity movement, is consulting with his new Konsigliere when Kol of the House of Kor arrives, asking for Kloaking technology. First, he pledge loyalty to the united Klingon Empire, but betrays Voq and steals his hungry crew out from under him with gifts of meat.

I’m not too keen on this choice, as the show seems to be showing us the parallel Klingon plot in order to humanize them. To warrant all this screen time, what the Klingon characters think and feel must matter in the big events of the latter part of the season.

As a side note, Kol just seems like a random guy, but he’s an ancestor of Kor, one of the three legendary Klingon warriors of the Deep Space Nine episode “Blood Oath.” He went up against Captain Kirk in Star Trek: the Animated Series, shows up in the original series, and gets a marvelous star turn in the great Deep Space Nine episode “Once More Into the Breach.”

Question for the harcore Trekkies to discuss: Is there a connection between Voq, the albino torchbearer, and “The Albino,” enemy of the legendary Klingon warriors in “Blood Oath?” Take it to the comments!

At any rate, this plot isn’t that dark, as Voq is saved by the power of friendship and of inappropriately sexually charged relationships with high-ranking subordinates. We’ll see how that works out.

While the episode does seem for the most part to stand alone, there are dangling ends—threads from past episodes picked up here, or left for future episodes to pick up at their leisure.

One is that, while our beastly little Ripper has helped save dozens of lives and the entire Federation war effort by navigating the Discovery through spore-space and back, it did not seem pleasant for him. Hooking him up to the Glenn‘s equipment seemed painful (and degrading). I like this choice, as it puts a bit of a natural constraint on an otherwise overpowered technology.

So we will have to watch for future episodes to see how this will sort out, and whether Michael’s sense of responsibility for Ripper will trump her sense of duty to her irritable and slightly morally ambiguous crew.

But for now, we can revel in the discovery of the impossible. For, as the short-lived Clerk’s animated series asked back in the year 2000, Star Trek: Discovery has finally answered.

“Who is driving? Oh my God, bear is driving! How can that be?”

Snoochie boochies. I hope you enjoyed one of the last references to the 2000 Clerks animated series you will ever read. Live long and prosper.

One Comment on “Star Trek: Discovery – What’s in the Box?”