Last week I said this episode was supposed to be GREAT (yes, IN CAPS!) according to someone on the internet somewhere, and…I was not amazed. It was good! And funny! But a lot of it felt like set up for what’s coming next, and most of it wasn’t all that new. It showed us what we knew was coming: numerous attempts by Michael to torture our four main characters, ending with Eleanor finding out what was going on every time but one.

The one time someone else figured it out, it was Florida dirtbag/professional amateur DJ Jason Mendoza, a.k.a. Jianyu. That was a low point for Michael, of course. Jason knew something was up because none of the TVs in The Good Place had the NFL RedZone channel, and also because his soulmate didn’t know who Blake Bortles is. Chidi still thinks what landed him in the Bad Place is his habit of drinking almond milk (it really is awful for the environment, by the way, between growing the almonds and making the milk, it wastes so much water! But that’s not the point.) and Tahani still thinks she’s perfect and Taylor Swift’s best friend. 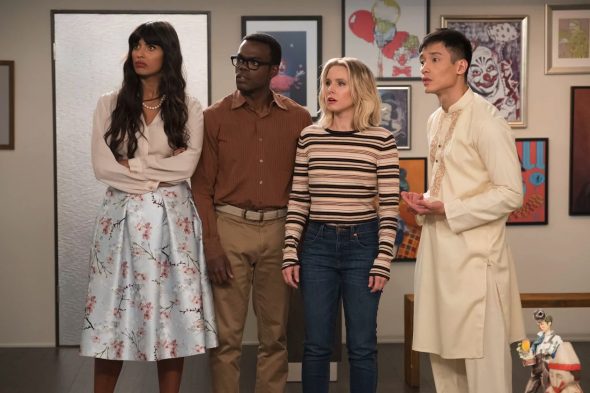 The episode opens on a quick montage of Michael’s third attempt which follows the same story lines we’ve seen in the season premiere, except Tahani is mean to Eleanor so Eleanor calls her a mean giraffe and presumably gets drunk afterwards, which means we get a chaos sequence that features giraffes running around the neighborhood the next morning. A few days later, Eleanor asks Janet (you know, Busty Alexa!) if she knows anyone who’s “a teacher, a life coach or an instagram fitness model” who can help her learn how to become an even better person, so Janet introduces her to Chidi. Good old Cheedo. Chili? Cheebee? Cheeto Superdork Jones? Yeah, him. Eventually our four imperfect after-life friends have to decide once again which one of them should be sent to the Bad Place and Eleanor figures out what’s up again. Cut to Michael’s 11th attempt.

“Eleanor always hates her house, Tahani always hates Eleanor, Jason hates being quiet. Chidi immediately gets a stomachache. So there’s a lot to work with here.” The show’s focus turns to Michael now and he’s not doing so well. His boss Shawn still thinks he only rebooted everything once and if he finds out what’s going on, Michael’s skin will be blown up and fried on the surface of a million suns or something like that, you know, a more traditional kind of torture.

We see all four main characters in one of Chidi’s classes, which makes me wonder what prompted Tahani to think she needed it (she totally does, but she might be the least self-aware of the four, so I’m surprised she didn’t take over the class instead), and Chidi is excited because they’re discussing David Hume’s “bundle theory of the self, baby!” Eleanor has to leave because her soulmate prepared her a three-hour spoken-word jazz-opera, which honestly doesn’t sound like such an awful idea until you see it executed, so she immediately recognizes that they’re in the Bad Place. It’s really bad, and Vicky doesn’t even get to play her triangle! 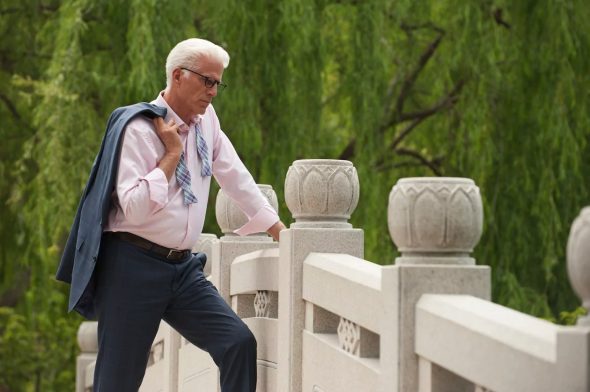 Meanwhile, Michael has to kill Janet whenever he erases everyone’s memory, and her fail-safe mechanism gets activated every single time he does. She begs him to let her live because she has tickets to Hamilton and there are rumors that Daveed Diggs is coming back, which sounds and is too good to be true. RIP everyone’s chances to see Hamilton with the original cast. The demons go on strike, and Vicky confronts Michael with a list of demands. She wants a bigger role and a chance to use her new Australian accent, Gayle wants to change her backstory to MMA fighter, and Glenn still wants to bite people. He’ll settle for doing it only when they’re asleep, but Michael refuses because that might make the whole “this is really the Bad Place” thing a little too obvious, so Vicky tells him what we’re all thinking: it already is? That, or Eleanor is a genius. No, it can’t be that, because Jason figured it out once! So yeah, Michael is really bad at his job and getting desperate. Vicky also brought a report of every single thing he’s done wrong along with her own, I’m sure much better, plans for how to run the neighborhood, so he’s really screwed.

Chidi is teaching Eleanor about Aristotle but she’s bored so they go out for a walk instead. They stop at the clam chowder fountain and drink some of that yummy “hot ocean milk,” which should have been a dead giveaway, because having seafood cream spring from a fountain outdoors just screams “Where’s the nearest bathroom???” They don’t catch on to that at all though, only realizing they’re in the Bad Place because Glenn and another demon are smoking cigars and complaining about work and Todd shows up looking like his lava monster self because his human costume is too itchy.

Chidi and Eleanor run away screaming and Eleanor asks Janet to take them to a different neighborhood. Chidi’s once again convinced it was the almond milk that landed him in hell and Janet makes train sounds and they show up at Mindy St. Clair’s doorstep! Mindy does not look surprised and asks them if they brought her cocaine, which, of course not. (What’s the policy on Janet providing them illegal stuff? She got Jason jalapeño poppers that sounded like they came from a place that couldn’t possibly pass a health inspection, so there is a precedent there…). So Mindy tells them they’ve been to her house fifteen times before and she started writing down all the plans in index cards that she glued to the back of an ugly 80s-looking poster. At this point in the episode, it becomes clear that they’re experiencing what happens when you cross Groundhog Day and Memento. They kind of keep reliving the same things over and over, except they can’t actually learn from it. 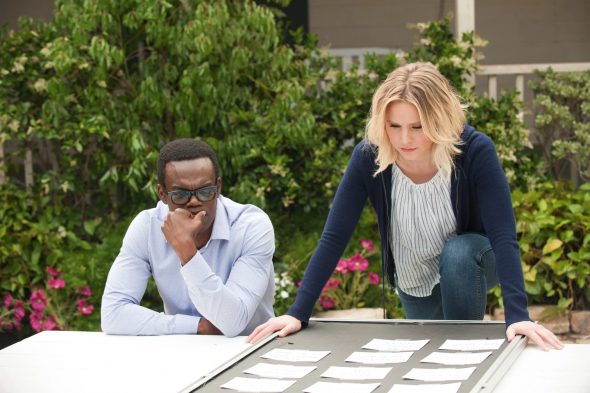 Chidi calls it “a warped version of Nietzsche’s eternal recurrence” and an “epistemological nightmare.” But Mindy’s index cards are this story’s Memento tattoos. I don’t know how helpful they will be, but now Chidi and Eleanor know that they can save information for later, although it’s a long shot since in 400+ reboots, they only went to Mindy’s house 15 times. The other thing we find out is that Chidi and Eleanor have hooked up! Multiple times! Twenty times in eight days, to be exact! Mindy cut a hole in the wall in order to watch them and eventually taped over her VHS of Cannonball Run 2 so she could diddle her skittle to some homemade Cheleanor porn. Eleaidi? Either way, I’m shipping them. They say I love you to each other, which is shocking because Eleanor had only ever said it to Stone Cold Steve Austin and a guy she thought was Stone Cold Steve Austin.

Michael is so depressed he decides to bounce some ideas off Jason, and it weirdly works. Jason tells him about the time his friend left their dance crew and started a new one, so they decided to face off and Jason’s crew slashed their tires instead. Cool story bro. Michael is inspired though, and decides to team up with the main four as a way to avoid getting caught. He’s been able to hide his huge failure from his boss so far, but now he has to deal with his subordinates striking and Vicky’s blackmail, so who knows how long he could keep this up by doing the same thing over and over again. He needs a new plan, and he’s got it!

But is he setting them up? Or does he really want to try something different since Vicky looks like a bigger threat to him at this point? I don’t know and I’m excited! This episode felt a little repetitive at times because it showed us a lot of things we either knew were coming or had seen some version of before, but it worked to set up whatever’s coming next, and I have no idea what that is. So I’m looking forward to next week!