We’re delivering our Game of Thrones recaps in a series we call Game of Thrones Unlocked. These articles will contain spoilers through the episode under discussion. This week, Matthew Wrather tackles “Eastwatch” (Season 7, Episode 6).

One of my pet peeves with lesser dramatic storytelling is a plot involving trivial misunderstandings and uncharitable assumptions which could cleared up with a candid three minute conversation. Let’s call it the Gossip Girl problem: when characters decide to remain willfully ignorant despite readily available information; when they assume the worst of others against manifest evidence; when they act in ways they ought to know are contrary to their own interest. It’s not that this kind of thing never works, it’s just that it has to be handled deftly and with a great deal of psychological insight.

Game of Thrones has had a problem like this for several years now. We realize that the important thing on the horizon is the apocalyptic battle between the living and the dead, and it’s been a little frustrating how slowly some characters have cottoned on. Now only Cersei still thinks the show she’s in is Gossip Girl, though, to be honest, Blair Waldorf was crueler to her enemies. 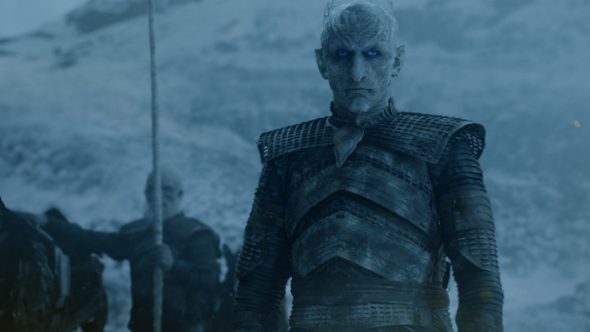 The Night King is real, the army of the dead is real, they can kill dragons, and if you don’t know, now you know, Daenerys. “You have to see it to know,” she insists, a point underscored by the first shot in the episode, as the camera sweeps over the model of Westeros in Dragonstone, quickly fading into a shot that sweeps over the frozen lands north of the wall. The map is not the territory.

Do you actually have to see it, though? What sorts of knowledge can you pass along or pass down? How do we learn, how do we see from others’ (maybe even the Others’) points of view? Daenerys generally benefits from comparisons to her father, but north of Eastwatch, as the Magnificent Seven march toward whatever awaits them, Jon and Jorah wonder how they measure up to theirs. (And yes, before you “well actually” me, it’s highlighted in that very conversation that Jon doesn’t look much like Ned.)

Both Jeor Mormont and Eddard Stark were severe men—righteous, unyielding northerners whose internal compass never lost track of their sense of right and wrong. They were both tested by life, both fatally, and the non-fatal tests had the effect of strengthening the rigidity of their convictions rather than tempering them. Both were leaders and intimidating role models, and as they talk, Jon and Jorah find themselves in moral territory as unfamiliar as the physical landscape they are traversing. 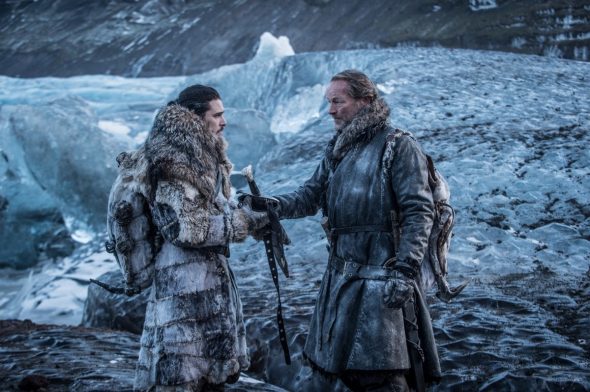 Having spent so much of their lives anxious to live up to their fathers’ example—or guilty that they haven’t—they now question whether all that rigidity is such a good idea after all. They wonder what lessons to draw from history. “I’m glad my father didn’t catch you,” Jon reassures Jorah, who had fled from Eddard Stark’s sentence of death as a punishment for his role in the slave trade. And Jorah doesn’t want his sword back. “He gave it to you,” he says. “I forfeited the right to claim his sword.” Sticking to your guns in the face of hardship is certainly strong, but it has a downside: Mance Rayder’s stubbornness, for example, killed untold thousands of his people.

Back at Winterfell, Game of Thrones is eager to demonstrate that last episode was an anomaly and that it will continue to move at a brisk pace by staging the confrontation between Arya and Sansa right away. This has a bit of the Gossip Girl problem; I’m disappointed that they’re both so easily taken in by Littlefinger’s transparent stratagem. Everyone warns each other about that guy, and apparently no one listens to anyone. But I think we can cut them some slack, because the conflict rings true psychologically, and siblings can have notoriously difficult relationships. Despite all they’ve suffered—and they have, both of them—conflict makes them neurotic, and they can’t see one another’s points of view. They fall back on old patterns. (Still and all, just go talk to Bran, who knows everything!)

My sympathies are entirely with Sansa—Arya is too harsh, too quick to condemn, too like her father—and I’m glad that Sansa gets a couple good swipes in. But the interesting part of the scene is the story Arya tells about practicing archery in the yard while her father watched her unseen, revealing himself by applauding her first bullseye. “I knew that what I was doing was against the rules,” Arya remembers, because girls shouldn’t be training on weapons. “But he was smiling, so it wasn’t wrong. The rules were wrong.” 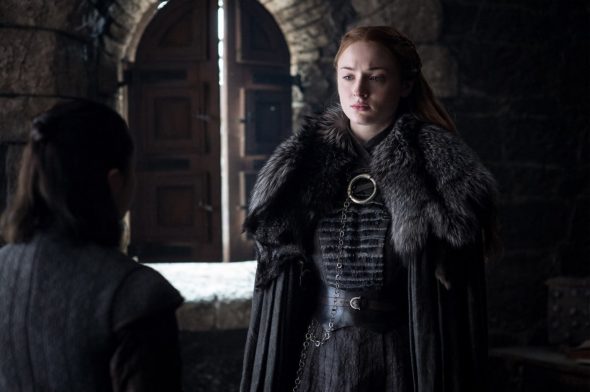 On one level, it’s pertinent to note that there are two dichotomies being set up here: a 2-dimensional grid with “rules vs. against-the-rules” on one axis and “right vs. wrong” on the other. A female archer is on the bad side of one dichotomy but on the good side of the other. But examined more closely, this observation begs the question. Rules are fossil morality—they are meant to encode the lessons that experience has taught our forebears about right and wrong. If the rules don’t tell us the difference between right and wrong, what does?

I realize that rigidity vs. flexibility was my theme three weeks ago. Maybe I just have a limited interpretive palate, but maybe George RR Martin’s project as a revisionist of heroic fantasy is related to the question of what happens when you evacuate the easy answers from your moral universe. Cersei and Jamie are the only holdovers from Ned Stark and Robert Baratheon’s generation, and Cersei’s probably faking her pregnancy, so they’re not likely to pass along their wisdom to the next generation. 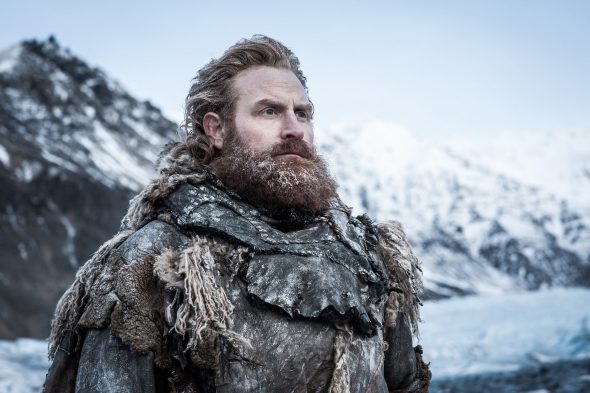 Back north of the wall, they too are stuck for answers. Tormund and the Hound are like brothers—too alike to see that they’re alike. They’re mirror images of each other, but the Hound’s impulsiveness has led him into cynicism, and Tormund’s into a epicureanism, a kind of joyful celebration of sensation and experience. Even Brienne’s hostile glares are a cause for celebration and excitement. He’s even excited to learn new words: “Dick. I like it!” he exclaims, learning a name for his favorite preoccupation, and the Hound is quick with the rejoinder, “I’ll bet you do.”

Jon and Beric are having a more sober conversation, more immediately related to the moral question on our minds. “What’s the point of serving a god when nobody knows what he wants?” Jon asks Beric. That is, how do you come to know the point of view of a cosmic entity, especially one who seems to have such specific plans vis a vis this very campaign? The multiple resurrectee doesn’t have a good answer. He supposes that maybe it’s not our role to know, but his ultimate answer is more existential: “Death is the enemy. The first enemy and the last. The enemy always wins, but we still need to fight him.” 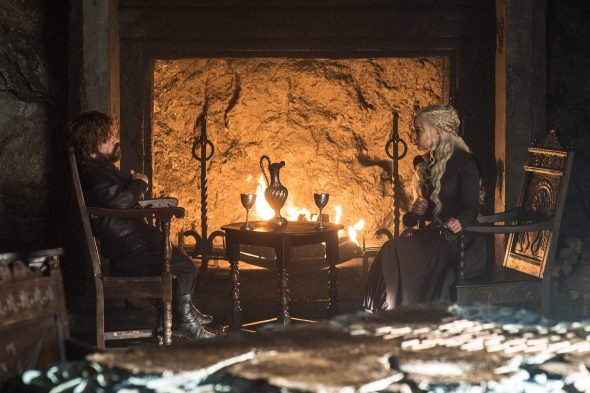 Doomed causes seem noble, and on Dragonstone, moral absolutist Daenerys would tend to agree that they are. To her, falling in service of a noble cause is itself noble, or at least she doesn’t want to think through the implications. And what’s more, the ends justify the means. Because she believes she is the rightful heir to the Iron Throne, anything goes: “What war is won without deceit and mass murder?” she fires back at Tyrion, who has the audacity to use those terms pejoratively. He is more practical, more worried about winning the peace, more committed to her vision than even she is, since her conception of “breaking the wheel” is tied up in her birthright, and his is more concerned with plan B. So he is the one who articulates most clearly the practical need to see things from a different perspective, and draw lessons from a source other than experience.

It’s at this point that the episode kicks into gear, and also at this point where the plot holes—who honestly thought that Cersei would listen to reason, and that bring her an actual zombie would help?—sort of fade in the face of rising tension. If only the holes in the ice were so easily and widely gaping. For what it’s worth, it’s also the point where my notes start to be in all caps, and where I may have actually leapt off the couch. “ZOMBIE BEAR!” “OH SNAP FROZEN LAKE!” “C’MON GENDRY!” The idea that this could go horribly, horribly wrong occurred to all of us last week, right? Where was Tyrion with the Plan B?

At Winterfell, Littlefinger goes full “evil genius” (seriously, nobody sees this dude coming?); Arya goes full Dexter, and then full third-wave feminist (female identity is a social construct, here’s a bag of faces as proof); Sansa goes full adolescent tantrum (pro tip: If you have to remind your sworn protector that you’re a grown-up, you’re not really a grown-up). I’m a little shocked that the confrontation between Sansa and Arya over the Bag o’ Faces comes after the huge reveal of Jon scrambling out of the frozen lake—they didn’t even make us wait a week, like they did with Jaime—since the latter seems like the bigger deal, both in the scope of the plot and, you know, cosmically, in terms of avoiding death. But there’s a Zombie Dragon, so I guess they have to dispense with the living before they get to that, with Jon’s hypothermic return to Eastwatch a heightened repetition of Gendry’s earlier collapse at the gate. 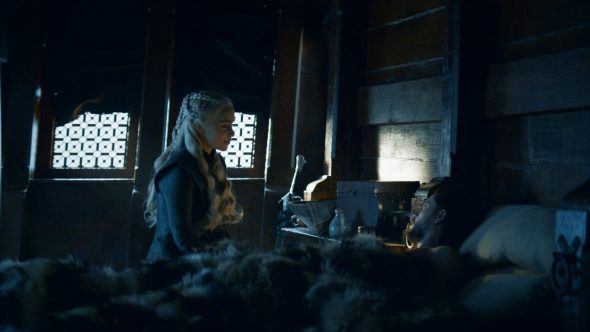 And then it’s Darmok and Jalad on the Ocean: Daenerys uncomfortably fingering Jon’s hand, Jon pledging that he’d kneel if only he could get up; Dany’s—excuse me, “My Queen’s”—weeping smile as she realizes what she’s sacrificed to see what she’s seen and to know what now she knows. Loss, it turns out, is the great teacher, and in a world where everyone seems to have lost their parents, loss of a child is the greatest teacher of all. How ironic, then, for those of us that watched the scenes from next week’s finale (what?), that Cersei, who has arguably lost more than anyone, seems to have learned all the wrong lessons.

14 Comments on “Game of Thrones Unlocked: Season 7 Episode 6, “Beyond the Wall””