We’re delivering our Game of Thrones recaps in a series we call Game of Thrones Unlocked. These articles will contain spoilers through the episode under discussion. This week, Ben Adams tackles “Eastwatch” (Season 7, Episode 5).

OK, guys, it’s time for some Game of Thrones Theory.

The most important line in Game of Thrones Season 1 was ultimately Cersei’s fateful words to Ned Stark: “When you play the game of thrones, you win or you die.” In the fifty-eight episodes since then, we have seen every possible variation of this game. And under normal circumstances, Cersei’s line has some bit of truth to it: There’s only so much Westeros to go around, and so the more of it that I control, the less that you control. And Westeros being Westeros, I’m probably going to kill you to make sure that I control even more and you control even less.

But “Eastwatch” tells us that the game has changed. With the Night King coming, the game of thrones is no longer zero-sum: you can win the game of thrones and die. So we better get everybody rowing (Hi, Gendry!) in the same direction. Ultimately, this episode is about all the different ways to get people to cooperate towards a common goal—and all the ways that can go wrong. 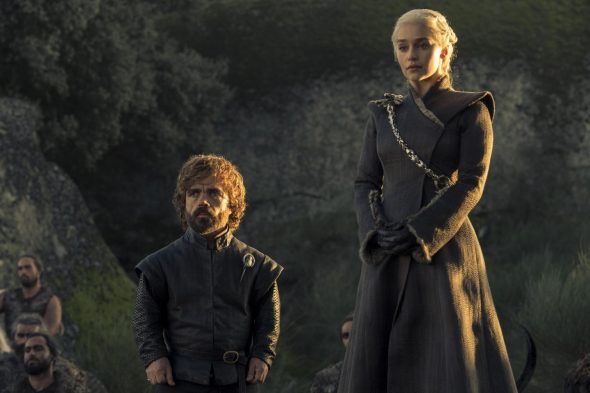 Beheading is Discouraged at the Teamwork Retreat

We open with the aftermath of last week’s battle, and Daenerys is making an offer that we could charitably describe as “tough but fair:” submit or die. And the Tarlys, stubborn lot that they are, elect option B.

In a weird way, Dany is living up to Ned Stark’s motto about “the man who passes the sentence should swing the sword.” As she says to Jon later, her dragons are not so much her beasts of burden as they are her children. So when she says “dracarys” she is every bit as intimately connected with the death of the Tarly boys as Ned was with that poor Night’s Watch deserter all the way back in Episode 1. And it works, after a fashion: The whole “burning people alive” thing really makes the last few Lannister/Tarly stragglers #ReadyForDany.

But as the rest of the episode shows us, getting cooperation is almost never as simple as “submit or die.”

Jaime returns almost immediately to King’s Landing to tell Cersei just how much trouble they are in: not just three dragons, but an army of Dothraki that would probably be unstoppable all on their own. “Submit or die” should cause Cersei to surrender, right?

Noooope. As she says, when the options are “Fight and die” or “Submit and die,” she’s going to fight. Dany’s problem is that the people on the other side of the negotiating table don’t see themselves as having anything to lose by fighting to the bitter end. The deck may be stacked against them, but they have to try, right?

Jon and Dany, on the other hand, see more eye to eye. 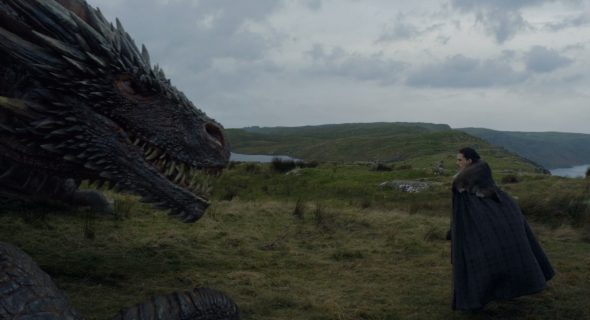 While they are nominally at odds with one another (in that Jon is technically kinda-sorta in rebellion against her), they both know that the game of thrones is not a win or die proposition. Once you recognize that the throne is worthless if the Night King wins, it becomes a lot easier to start thinking of trusting potential rivals for that throne. As Jon says, “Trust in strangers is our best chance.”

Sansa sees this too. Despite both her Northern Lords and the Lords of the Vale getting uppity, she chides her sister that “cutting off heads is satisfying, but it’s not how to get people to work together.” She can’t afford to go the “submit or die” route because she needs the Lords on her side as much as they need her to keep the North together in Jon’s absence.

What people in Westeros are gradually realizing is that their situation looks a lot like the Prisoner’s Dilemma:

That is, if everybody could just get along and fight together, then they stand the best chance of defeating the Night’s King. On the other hand if everybody keeps fighting like Cersei wants to do, then the dead are definitely going to win.

What keeps things interesting is that there’s a third option: Make everyone else think you’re on Team Breathing, but hold something back for yourself, so that once everything is done you make sure you’re the one that winds up on top. This is clearly what Cersei is contemplating: “An accommodation with the Dragon Queen may be in our immediate interest.”

Littlefinger seems to be thinking the same thing: turn the Starks against each other, and pick up the pieces afterwards (and to hell with what that means for the war against the dead). Indeed, Littlefinger shows us that he understands the forces that will prevent Westeros from banding together in the face of this existential threat: Relationships and history. 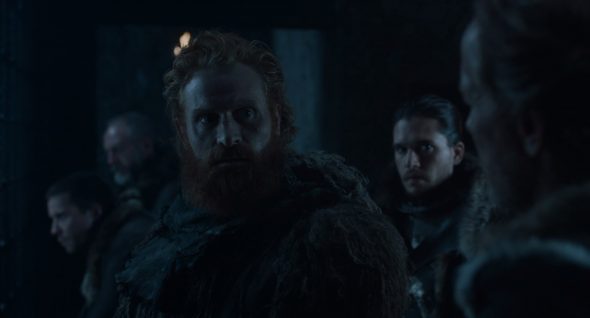 And then there’s that scene in Eastwatch, which had, in one meeting:

In all these interactions the people have little and less reason to trust each other. In a way, it’s a master class in the value of telling a story on television, rather than in just a few hours of a movie. The groundwork that’s been laid over the last seven seasons allows for these rich and deep connections between characters that have never met.

The Jon and Gendry meeting, for instance, was particularly cool because of how much it is informed by the past. Here are two characters that have never been within a country mile of sharing even so much as a story arc (much less a scene) with each other. But here, they still have this cool moment of bonding over the stories they heard about their fathers fighting together. (My only gripe is that Gendry didn’t mention Arya: Jon and Gendry are arguably the two people she’s closest to in the world, and it would have been interesting to see that discussion, particularly now that Jon knows that Bran and Arya are still alive.)

In that fateful meeting at Eastwatch, with characters from—I think—every single plot line of the series thus far, history makes getting along much harder: Tormund and Jorah hate each other solely on sight, and Gendry, whom we haven’t seen in like four seasons, is immediately confronted with the only people that have screwed him as badly as the Lannisters. Ultimately, however, Jon appeals to them with the logic I discussed above: “We’re all on the same side… We’re all breathing.” This gets us our kickass D&D party to head out on the Campaign of Ice and More Ice, presumably leaving their disagreements behind them. 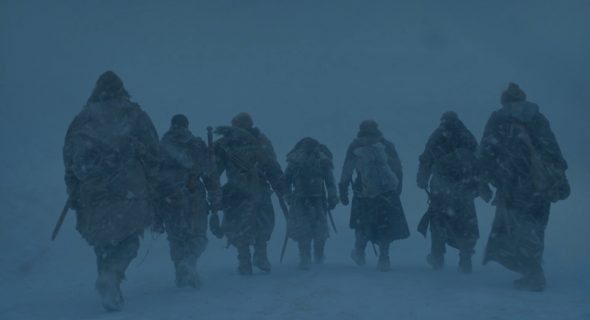 History is a Weapon

But while a lot of our team is ready to cooperate, there’s too much history for everyone to just let bygones be bygones. Indeed, in the right hands, history is a weapon to be wielded.

Littlefinger’s plot to turn Arya against Sansa is notable because it doesn’t involve all that much deception. He could have just faked a letter from Sansa, but he didn’t even have to! It goes by fast, and this plot point was a long time in the past, but the letter that Arya found was the one that Sansa wrote after the death of Ned Stark, telling Robb to come to Kings Landing and bend the knee to Joffrey Baratheon. The letter is only a “lie” because we know that it was sent by Sansa essentially at sword-point.

Robb and Catelyn (who received the letter initially) knew it for a fake right away, but Arya doesn’t. Here again, history rears its ugly head. Arya has never really liked Sansa or thought her very capable, and so everything she sees is going to be through that prism of distrust.

This plays out very nicely in the argument that Arya and Sansa have about the uppity Lords that don’t like Jon being gone. As the audience, we know that Sansa is almost certainly doing the right thing by listening to the Lords complain, rather than beheading them. The last week or two have established Sansa’s bona fides as a legitimately effective ruler.

Arya can’t see that, though. She’s spent her time learning to be a ruthlessly efficient fighter and spy, and so sees Sansa as being hopelessly weak and/or vain. But Arya has never had to deal with palace intrigue before. Sansa would see right through Littlefinger’s crap if he tried this cloak and dagger nonsense with her.

All Arya can think of, unfortunately, is the pre-war spoiled brat that Sansa was, not the hardened badass (one who has arguably endured things even tougher than Arya) that rules in Winterfell today. History, my friends, is a weapon. 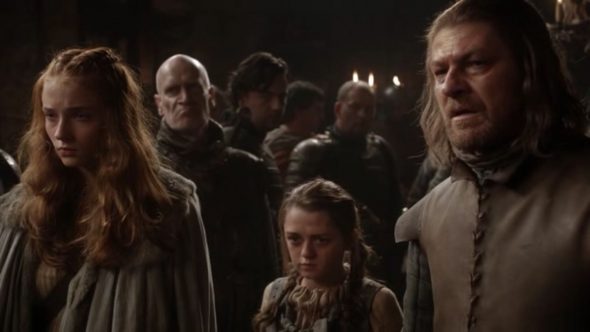 Which Sam Tarly understands all too well. His whole plan to defeat the White Walkers is basically, “Let’s get every Maester to open up as many history books as they can, and see if we can discover a way to win!” Which is pretty good, as far as plans go—he’s already discovered at least on White Walker killing weapon in an old book. (Dragon glass on Dragonstone! Who could have known?)

Unfortunately for Sam, he’s too busy mansplaining/complaining to realize that when he said “The secret to defeating the Night King” could be in an old book, that old book was the one that Gilly literally just read to him. In an epic bit of dramatic irony, we’re given a crucial piece of lore in a setting where the characters have no idea what has just transpired. The fact of Rhaegar Targaryen’s annulment and subsequent marriage means that Jon is not just a Targaryen bastard, but is in fact the legitimate son and therefore rightful heir to the throne of Westeros.

More importantly for the wars to come, that means he can probably ride a goddamned fire breathing dragon, which might come in handy in fighting an army of undead snow monsters. So at least we’ve got that to look forward to.