Ryan Sheely: We had a great podcast discussion last night on Lego Batman, but I’m wondering if there is more we didn’t cover. Anyone else see the film? Anyone who was on the podcast have some additional thoughts that got crowded out by our Oscar corner on La La Land?

Belinkie, you saw Lego Batman with your 11-year-old son, right? How did he like it? What were his (and your) takeaways about it, either vis-a-vis the original Lego movie or other superhero movies?

Matt Belinkie: Oliver has inherited some of my offbeat pop culture leanings, and so he has resolved to watch all the existing Batman movies in order of cheesiness. First Batman movie he ever watched was the 1960s Batman feature with the shark repellent. Then the Batman Meets Scooby Doo animated movie, which is just awful. Then Batman and Robin. He’s going to do Batman Forever next. I think that might make him the perfect kid for the lego Batman movie, which fully leans into the campy side of the character.

We both loved it. This is the Batman movie that needed to get made ever since 1989, when the character became aggressively PG-13. This is a Batman for kids that still captures everything that adults love about Batman too.

Peter Fenzel: So, to refresh all our memories, what do kids like about Batman Since it isn’t “making choices about which loved ones die.”

Belinkie: Batman has more swagger than anyone. He looks crazy cool at all times, he’s the best fighter in the world, he’s the richest, he’s the smartest, he’s got an unlimited arsenal of cool gadgets. Those things are all in the movie, cranked up to comical levels of excess. The way Batman is introduced is fighting every one of his villains at the same time, while performing a rock song about how awesome he is.

I’ve talked a lot about the concept of “earony.” This movie is earonic. It simultaneously mocks and revels in every facet of his character.

Fenzel: Batman has spirit animals of all four Ninja Turtles. He’s a leader, he’s a techie, he’s a rude guy with attitude problems, but, as we too often forget, he’s also a totally awesome guy who loves doing totally awesome things.

I for one welcome the return of Michelangelo Batman.

Fenzel: When people talk about how great it is that Batman accomplishes what superheroes accomplish without actually having any “powers,” I wonder if this is a big part of that. It’s not just that Batman is more credible a character or his achievements are more meaningful, but that he’s impressive, with more swagger and bragging rights.

Belinkie: Batman always wins with one hand tied behind his back.

Richard Rosenbaum: Batman is prepared for everything. Yes, he has virtually unlimited resources at his disposal, but the coolest thing about him is how hard it is to take him by surprise. He stays up at night thinking about everything you might possibly do to take him out, and he comes up with a plan to counter it. In the same way that Bruce Wayne always knows what fork to use at a fancy dinner, Batman knows which gadgets to bring for any occasion. Imagine how powerful it would feel to always be prepared for any eventuality, knowing that you can handle any situation because you’ve already rehearsed it in your mind in every possible configuration.

He can’t rely on superpowers, like Superman does. He relies on his own hyperdisciplined mind and powers of observation and deduction.

Belinkie: Although to be fair, the hyper-prepared version of Batman who is one step ahead of everyone else is NOT the one who shows up in the Lego Batman Movie. He has a couple moments of brilliance but also a lot of impulsive short-sightedness.

Rosenbaum: True. He even dismissed the Bat Shark-Repellant as useless. The shark repellant is the symbol of Batman’s ultra-preparedness exaggerated ad absurdum.

Belinkie: One of the moments I found most delightful was when Alfred tells Batman he has to go to a charity event and Batman starts flopping around on the floor, throwing a full-out tantrum. The only thing that cheers him up is a tuxedo dress-up party. Both the tantrum and the joy in wearing fancy dinner jackets are TOTALLY unlike any Batman we know… and yet somehow they feel true to the character. It’s almost like we can imagine “traditional” Batman doing those things in his mind, and this movie brings that behavior out into the open.

Fenzel: Maybe that’s also the Batman who insists on disappearing when Commissioner Gordon has his back turned in the middle of conversations.

It reminds me of the College Humor video from a while back about Batman denying that he kills anybody when he clearly just killed a bunch of people. There’s totally a deep Batman who is a stubborn child. 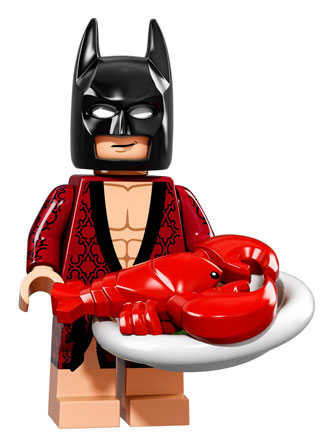 Belinkie: Last summer we discussed whether Zach Snyder’s Batman is a fundamental misunderstanding of the character (especially in his cavalier attitude towards manslaughter). The Lego Batman is also untraditional, but he feels like an EXCELLENT depiction of Batman.

This is something I’ve noticed about the Lego video games. At first I didn’t understand the point. Why would you rather play Lego Harry Potter as opposed to a more faithful Harry Potter game? But then I realized that translating these stories into Lego really allows you to distill the essence of a familiar story in ways that can be refreshing without being unfaithful.

Sheely: I noticed that too about the effect of Legos on character and storytelling. Why do you think that is the effect? On the podcast we talked a lot about how Legos as toys connect to this kind of imaginative (and deconstructive) play. But are the other aspects of Legos that have an impact on storytelling in video games and movies?

Belinkie: I think a big part of it is that in a Lego movie, violence is basically negated. It’s really interesting! In both The Lego Batman Movie and The Lego Movie there is theoretically LOTS of fighting, but it’s the most inconsequential fighting I’ve ever seen, because they’re Legos. It’s obviously a lot different than a live action Batman movie, but it also feels a lot different than other animated films. If you’ve ever seen a Kung Fu Panda film, those fight scenes are intense! In Lego Batman, the fighting feels like pushing plastic toys across a coffee table, in a good way! The fighting is still fun to watch – it’s lovingly choreographed and there’s a real joy to it. But it feels low stakes, which recontextualizes the story a little bit.

Sheely: You’re totally right. A related feature in Lego Batman is that the sound effect for all shooting is someone actually saying “pew pew pew.”

What did you think about this plastic hero with the big heart? Tell us in the comments!

One Comment on “Is Lego Batman the Best of All Batmans?”