Throughout September and October 2016, Overthinking It presided over the ‘Merica Madness tournament, an attempt to find the most American piece of pop culture with the word “American” in the title. The ‘Merica Madness team reconvened recently to reassess the tournament in light of the outcome of the 2016 presidential election and subsequent current events.

Ryan Sheely: Current events have me once again thinking back to ‘Merica Madness, and especially our final round, in which An American Tail defeated American History X by about a week before Trump went on to win the election.

Do we have any new thoughts on these two films, and about the broader endeavor of finding the most American piece of pop culture with the word “American” in the title after the first two weeks of the Trump administration?

Matt Belinkie: I have been thinking about ‘Merica Madness often recently. I think we did some very astute writing and made some good observations. But these is no questions that we called the Finals dead wrong. We are living through American History X, but without any of the third act redemption. 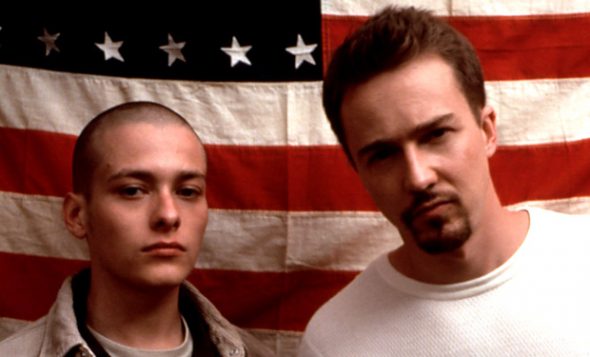 I will say two things in our defense though. First, although it seems hard to believe, the smart money WAS on a Trump defeat. I personally think Trump himself expected to lose and wanted to lose (although I’m afraid he’s warmed up to being leader of the free world in the months since). Secondly, contra the stereotypes about overeducated coastal white liberals, we’re all proud Americans, and we were all pretty loathe to crown American History X as the ultimate statement about America. Perhaps our celebration of An American Tail was wishful thinking.

Jordan Stokes: The cynic in me wants to say that we did get it right after all, it’s just that An American Tail isn’t the story that you thought it was. It doesn’t end with an impassioned plea for the cats’s right to dream the same American dream as the mice: it ends with the cats getting driven out of the country by mob violence. Dom Deluise’s character, Tiger (a cat who befriends Fievel), complicates this somewhat, but only somewhat. 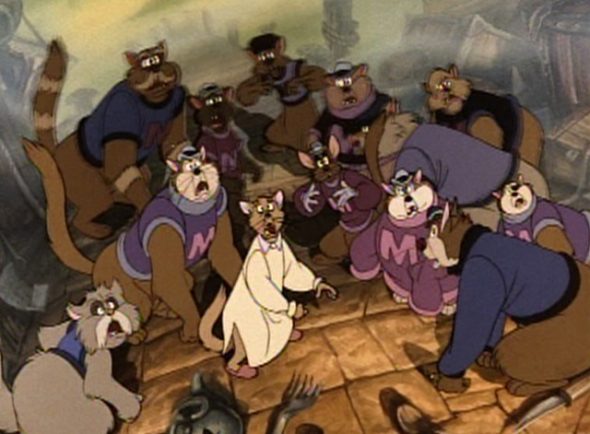 Here’s a thought experiment: does the average Trump voter think of himself as curb stompy Ed Norton? Or as plucky firework-shootin’ Fievel Mousekowitz? I spend most of my time being terrified that there are some who do openly identify as white supremacists. But maybe it’s more terrifying that most of them, even now, would call themselves Fievel. And think that Trump’s executive order is just an attempt to Make America Cat-Free Again.

Belinkie: I wonder if it is possible that the average Trump voter would see himself or herself as neither, and dismiss both movies as two sides of the same liberal propaganda coin. They’d dismiss the Neo-Nazis of American History X as strawmen, the same way people might smear the Left as being like the pampered, egocentric girls from Girls. And they’d dismiss the immigration fairy tale (tail?) of the Mousekowitzes as pollyannaish propaganda that doesn’t take into account the dangerous realities of modern terrorism.

And you know what? They’d have a point in both cases.

Peter Fenzel: I think one thing about American History X that resonates with contemporary politics is the rationalization for the behavior of the Vinyards that comes from them living in a poor, violent Black neighborhood. That the anger there and the need for strength in the face of a hostile world jive pretty well with the mindset of a non-Nazi that supports Trump. I think there’s something for them to identify with in the Black kid shooting Danny just because he stood up for an innocent, or Derek killing those guys because they were willing to come to his home, threaten him and his family, and break into and steal his car, all because he beat them in a basketball game. 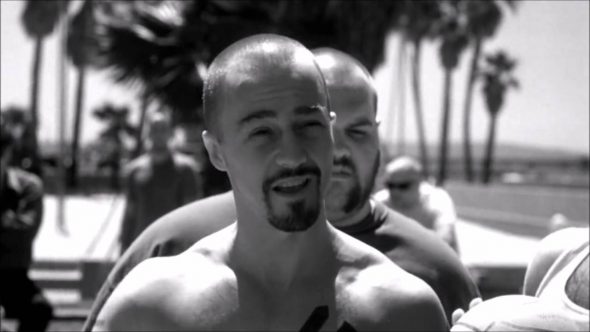 I think a lot of people would admire how Derek tries to protect his mom and how he tries to be the man of the house because his father is dead, and that the world calls on men to do that, since nobody else is coming to help you.

If you feel strongly enough about this stuff, the Nazi stuff can be rationalized as kind of tacked on to the underlying family drama, and also the sense of feeling unsafe and using courage and strength to reclaim pride and safety.

Basically I’m saying I don’t think American History X comes off as especially liberal and embraces a lot of the current right wing worldview. The efforts in the movie to show that Derek is obviously deeply troubled, Danny is even more troubled, and that you shouldn’t live like this are kind of tame and limited next to their anger and sense of being wronged and threatened. 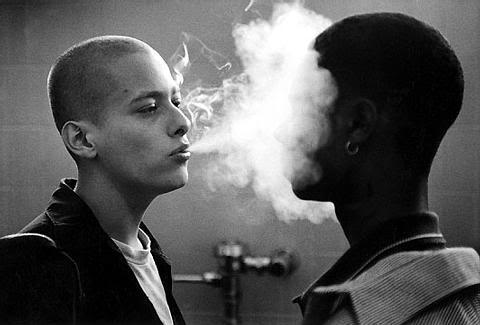 Belinkie: So you mean a lot of people would say, “Well, I don’t support all the Nazi stuff, but everything else about Derek Vinyard is pretty admirable.” I suppose the filmmaker DOES want us to think that, I guess. Derek’s not exactly a Nazi with a heart of gold (he assaults his liberal sister during a family dinner) but he’s clearly different than the OTHER Nazis.

Fenzel: I think American History X does a decent job of showing how the world can inspire racist anger and fear, and also how being undereducated or underemployed is not the same as being stupid, or how being a right wing lower-class or lower-middle class person might not come off in practice as being as against your own interest as it is often said to be. And the times when it stops to teach lessons about tolerance and kindness don’t fully replace all its roaring operatic portrayal of 360 degree cruelty and rage. They coexist, even though they contradict. Which feels grounded in the experiences of at least some real people.

It’s a tragedy. There isn’t a happy ending.

And ultimately it’s about what happens when you look to figures of authority to have your back and care for you, and they aren’t there, or they care about their problems more than your problems. What do people become?

And then Cameron Alexander (the Neo-Nazi leader in American History X) and the Camerons of the world connect with that fear, enflame it, and validate it, which feels great because these are people who don’t feel very validated for a variety of reasons. 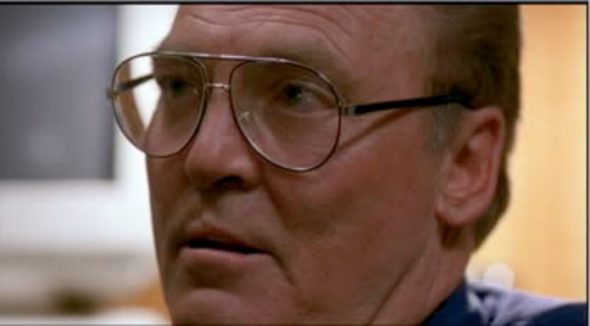 Ben Adams: I think the alternative reading of the two stories in terms of contemporary political discourse is even simpler than that. For American History X, it’s “Yes, white people used to be outright racists (which was bad), and then they learned better, but the black people keep shooting them anyway.”

For Fievel it’s just “Yes, the refugees used to be mice trying to make a better life (which was good), and then they went West to become American, but the new refugees aren’t really mice, they’re actually snakes who can never live harmoniously with mice, so they can’t come in.”

Sheely: I want to go back to something that Pete said about the Camerons of the world preying on fear. There are similar dynamics in An American Tail, with Warren T. Rat actually being a cat disguised as a rodent, preying on the fear and vulnerability of the mice to exploit them. To me this also connects to some elements of the current situation, where a relatively elite-driven anti-elitist populism is serving as a mouse disguise that connected with big segments of the electorate.

I guess the bigger point is that the simple fact that the protagonist of An American Tail is an immigrant, and that he ends up reuniting with his family and soaring above the Statue of Liberty doesn’t automatically mean that we got the tournament all wrong.  AAT is also filled with fear, hate, divisiveness, darkness, and above all a sense of being hopelessly lost. At the beginning of this conversation, Belinkie said that we are living through American History X without the third act redemption, but I think it could also be said that we are at the same point in the An American Tail narrative arc.

The turning point for An American Tail comes with Feivel’s friendship with Tiger, which comes around the same time as the reveal that Warren T. Rat is a cat in disguise. I think this proximity isn’t just a narrative convenience; there is something thematic here. If cats are actually similar enough to rodents that it is possible for one to pass maliciously, then it is also possibly that cats and mice can find something in common that bring them together. It isn’t easy, and takes a lot of risk, but it is the way to break an endless cycle of violence and mutual mistrust. 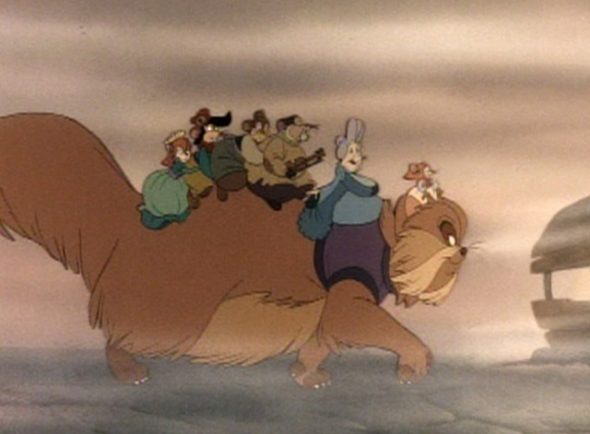 So I still think we picked the right winner. And yeah, maybe that is still a level of hopefulness that is at this point naively optimistic. But if our task was to pick the most American piece of pop culture with American in the title, I still think we chose correctly. I’d rather think of all of us as lost, alienated, and confused but still able to work through it (even if success is unlikely and unclear), rather than being tragically doomed to be shot in a bathroom, regardless of whatever personal growth we undergo.

Belinkie: Sorry Ryan, I admire your optimistic take, and maybe if you take a long enough view that arc of history bends towards justice. But from where I’m sitting this is a nation that was pretty divided from the start, and despite a lot of fervent hopes that it might not always be that way (Edward Furlong quotes Lincoln’s “better angels” speech in the closing moments of History X) I feel like in a hundred years, it’ll still be that way. 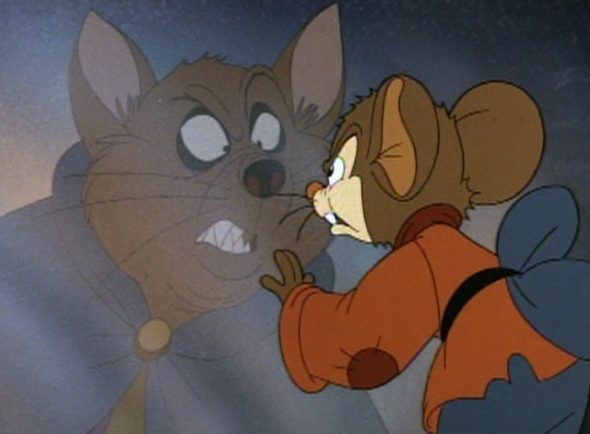 And as for Warren T. Rat, undoing all his support was a simple matter of knocking off his fake nose. But in the real world it’s extremely difficult to get people to see the Camerons for who they really are. People will dig in and defend their worldview at all costs, whether its liberalism, conservatism, or Neo-Nazism.

An American Tail is a wonderful expression of the dream and the promise of “America,” and that dream has been hugely influential all over the world, for 150 years. That movie deserved to be in the finals. But our goal was to select the pop culture that was most revealing about America, and I think we just didn’t have the heart to admit the obvious.

But ask me again in 4 years.