n election years, America becomes an exaggerated version of itself, like a twenty-something writing a Tinder profile. All of our national traits are cranked up to 11: our fierce patriotism, our grassroots can-do spirit, and our boundless ambition to remake the world. (Unfortunately, so too are our xenophobia, our struggles with race and gender, our increasingly stratified class system, and our disillusionment with institutions.)

We at Overthinking It have been musing over all the great pop culture that’s tried to hold a up mirror to the USA over the years. And since nothing is more American than a pathological need to be #1, we’re going to celebrate our nation by finding the most American piece of pop culture… that has the word “American” in its name. No, the word “America” doesn’t qualify (maybe next year), and “USA” certainly doesn’t qualify (sorry Lee Greenwood – you would have gone far).

Why limit it to pop culture with “American” in the name? Aren’t we excluding many competitors that are just dripping with Americaness? (It’s easy to imagine The Simpsons crushing all challengers like so many Scratchys.) One of the reasons is that without that restriction, the field would be so wide that we couldn’t hope to narrow it down. But we’re also fascinated by movies, TV shows, and songs that have the audacity to frame themselves as broad statements about the nation as a whole. Take American Beauty for instance. No one in that film gives a big speech about the United States. No one is trying to address any larger societal problems. There’s no reason you couldn’t translate the film into Japanese and set it in Kyoto. But the title makes it clear the filmmakers want you to see this story as something quintessentially American. We want to take those works and look at what they say (and how well they say it).

And what do we mean by “most American”? How do we intend to pick the winners? To us, “most American” doesn’t mean the most popular or populist. It means something that’s insightful about America. We’re looking for pop culture that reveals fundamental truths about this country. In some cases, these truths may be ugly, but perhaps we can take a perverse pride in being a nation that makes great art out of its own shortcomings.

So how will this work? After months of debate, we’ve settled on a bracket of 32 top contenders, organized around four of America’s central preoccupations: Violence, Sex, Family, and Capitalism. These are your ’Merica Madness competitors. Click to get a printable PDF with forms you can fill in yourself! 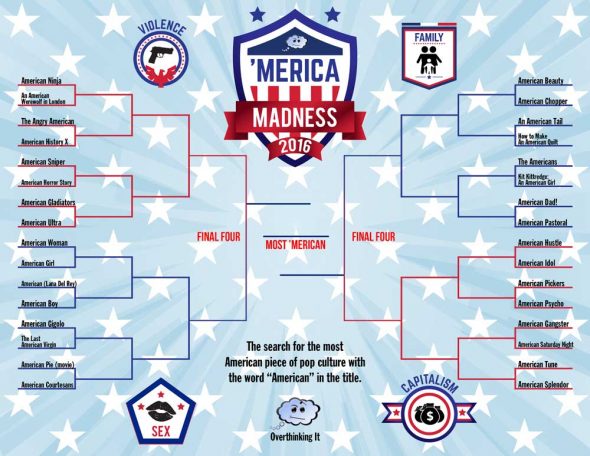 Note that sticking to these four themes meant dropping a few of our favorite “American” pieces of pop culture, which just didn’t have a place. Bye bye “American Pie” (the song – the movie is still very much in play).

In the coming weeks the Overthinking It editors will be writing posts discussing the Round 1 matchups and announcing the ones we believe should advance to the Sweet Sixteen. So if you want to advocate for your favorite ’Merica Madness competitor, post a comment below – we’ll take it into consideration. And if you want to impress us, download the bracket above, fill it out, and email it back to me at [email protected]. Whoever is closest to our final selections will get a patriotic t-shirt of our choice!

Good luck to all our ’Merica competitors. Next week we kick things off in true American fashion: with Violence.

12 Comments on “Prepare For ’Merica Madness”