One of the upshots of summer blockbuster season is that you end up seeing a lot of origin stories for both superheroes and supervillains.  With every new franchise, reboot, or entry into a sprawling cinematic universe, a substantial amount of time is devoted to explaining how the character gets their powers. The most recent example of this is Suicide Squad, which was widely criticized for spending roughly an hour and a half trudging through the origins of each member of its cast.

As we made our way through 2016’s long summer of superheroes from Batman vs. Superman up to Suicide Squad, we started to keep track of the origin stories of both the good guys and the bad guys in each film, and started comparing them to other iconic characters from comics (and to a lesser extent movies, TV, video games and literature). As we started to sift through the growing mound of origin stories, we found that four elements kept coming up again and again:

What is interesting is the multitude of ways in which each hero or villain’s origin story draws on some or all of these four elements to build a character’s backstory. Some characters, like Batman have all four attributes, while others, such as Black Widow, just draw on one element (in her case Training).  Putting this all together, we can map out 30 origin stories that draw on the various permutations of these elements- 15 heroes and 15 villains. Click to embiggen!

And here they are split up, in case the first one was too much diagram for you to handle. 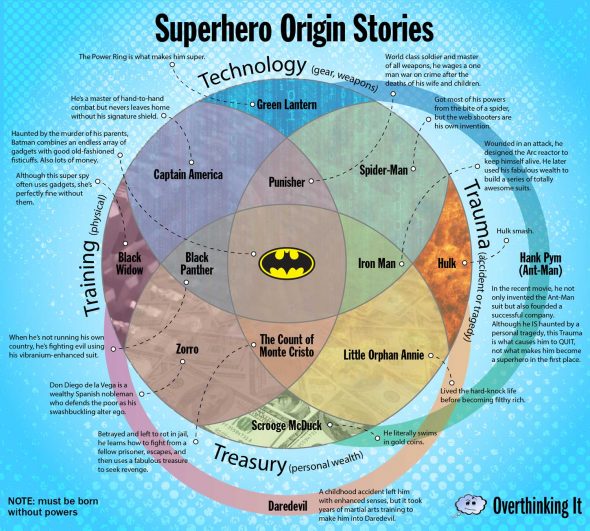 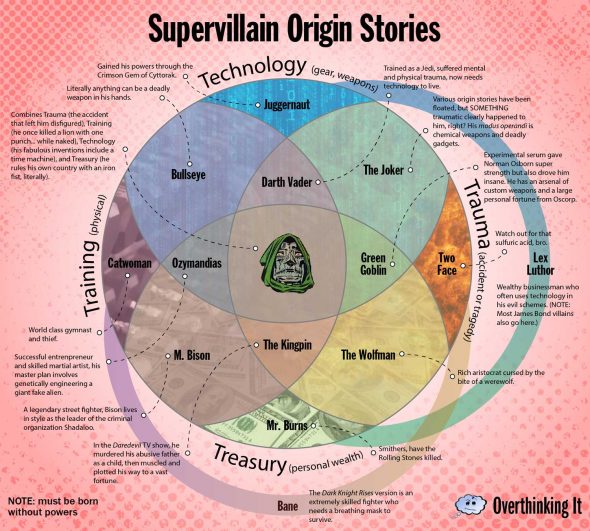 In future posts, we plan on diving more deeply into specific patterns that the two venn diagrams reveal, but here are a few preliminary observations that struck us as we worked on this project.

First: While this project started as attempt to classify hero origin stories, we found that it was just as easy to apply the same attributes to the origins of Villains. This indicates that what separates villains from heroes is less a matter of the specific elements of the origin, as it is the nature of their motivations. This fits with Richard Rosenbaum’s recent article that applies RPG alignments to superheroes and super-villains in the DC universe, which identifies a variety of both good and evil motivations that may interact with our origin story elements to create heroes or villains.

Second: Looking at the venn diagrams helps identify differences in heroes and villains that drive storylines. The Avengers are often interesting because each of the principal members has different doses of Trauma, Training, Treasury, and Technology. Similarly, while Batman has a blend of all four origin story elements, he often faces off against villains such as Catwoman, Two Face, or the Joker whose origins draw on a smaller subset of elements.

And finally, not every combination of origin elements is equally well represented, which meant that finding one example for each overlap in the Venn Diagrams was not simple. For some combinations, there were many heroes or villains who had similar origins. (Just Trauma covers anybody who gets their powers in a freak accident: Flash, Dr. Manhattan, the Tobey Maguire Spider-Man with organic web shooters.) For others, we had to reach a bit outside of comics for examples of heroes or villains whose origins drew on those elements. This is especially the case for “treasury,” either alone, or in combination with only Training or Trauma. Absent technology or combinations of three or four ingredients, our wealthy heroes and villains are less from the realm of comic book superheroes and villains, and more from the world of cartoons, literature, and video games.

What other patterns do you see as you make your way through the Hero and Villain Origin Story Venn Diagrams? What other characters fit into this schematic, and which ones are outside of the scope?  Let us know in the comments and stay tuned for deeper dives into the inner workings of both charts.