If you’ve already seen the Suicide Squad movie…well, I’m sorry for your loss. But it doesn’t need to be a complete disaster. The movie brought to life, and to wider audiences, a few of the coolest supervillains in the DC rogue’s gallery. And also Captain Boomerang.

And if you’ve been on the internet for a while, you’ve seen all kinds of charts assigning all sorts of characters to the set of alignments from Dungeons & Dragons. For the uninitiated, “alignment” is basically a description of the moral behavior of a character, and in D&D (at least before Fourth Edition), it exists along two axes: Good-Neutral-Evil, and Lawful-Neutral-Chaotic. A lawful good character, for instance, is the type who always does the right thing and follows the rules, whereas chaotic evil is someone who just don’t give a eff and sows destruction for no real reason at all. 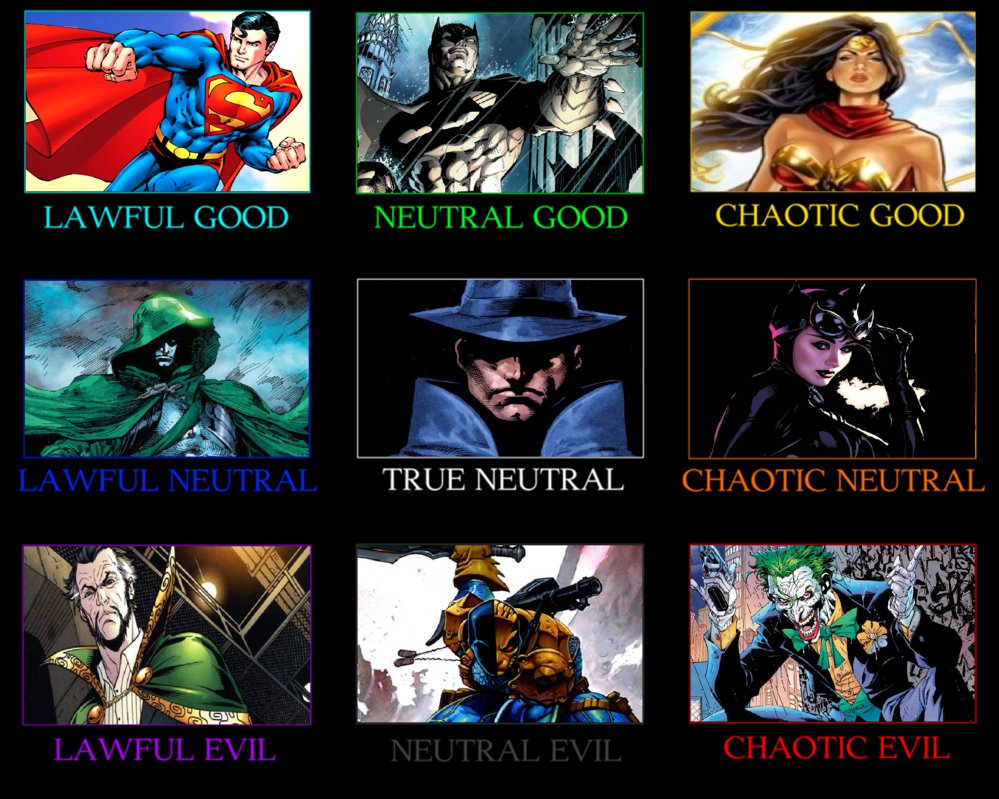 At Overthinking It, we love us some typologies. And Suicide Squad presents a nice spread of personalities and motivations for characters that just seemed perfect for a little analysis. But the D&D alignment chart has already been done. So I thought, let’s try something a little more interesting – or at least more obscure.

In the mid-80s to early-90s, Mayfair Games published an RPG based on the DC Universe called, appropriately, DC Heroes. It’s long out-of-print, but one of the ways that it set out to distinguish itself from the archetypal RPG Dungeons & Dragons is with its alignment system. As opposed to D&D’s sort of Cartesian coordinate system, DC Heroes had two overarching categories – Heroic and Villainous – with each subdivided into five varieties that typify the reasons and actions that characterize a, uh, character. The heroic ones, which I’m not going to delve into here, are as follows: upholding the good; responsibility of power; seeking justice; thrill of adventure; and unwanted power. As for the villainous ones, well, Suicide Squad does a pretty good job of diversifying its bad guy portfolio in terms of alignment. So let’s see how they all fall out, shall we? 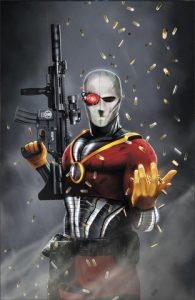 This one’s easy. Deadshot is literally a mercenary, a murderer for hire. He doesn’t care who he kills, as long as he gets paid for it – and with the uncanny ability to hit absolutely anything he aims at without fail, as you might expect he can charge some pretty outrageous prices for his services. What does Deadshot’s alignment tell us about his character? As he tells Harley Quinn in the movie, he doesn’t really do love. He wouldn’t be able to sleep at night if he killed people for a living – good or bad guys, innocent or guilty – if love (or, basically, thinking of other people as people) were a part of his psychological makeup. Though, of course, this isn’t completely true. Again, in the movie, the only reason he was caught in the first place (and hence subsequently recruited for Suicide Squad) is that he balked at killing Batman when he had the chance, because he didn’t want to traumatize his young daughter who would have been a witness to the murder. And killing the Bat is Deadshot’s ultimate fantasy. He’s got to have some serious love for that kid to give it up for her. So, okay, he’s got to believe that some people are people, at least. And the rest of them? Maybe best just not to think about it.

Incidentally, Slipknot also falls into the mercenary category. But I don’t really think we need to include him in this list. You know, considering. 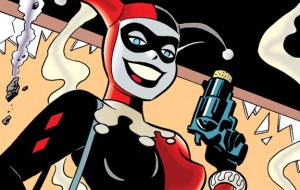 Doctor Harleen Quinzell was a promising psychiatric intern at Arkham Asylum until she meets the Joker and becomes infatuated with him. The Florence Nightingale Effect sets in, infatuation turns into obsession eventually and love – or at least what she thinks of as love – as Dr Quinzell decides to ditch psychiatry and civilian life to become Mr. J’s sidekick and often-abused girlfriend.

Despite being known as Joker’s lady, Harley is far from just a female clone of the Clown Prince. She’s modeled herself after him, sure, but her philosophy and motivations differ from his in some pretty significant ways. She’s really in it for the fun. While she can keep up with Joker’s murderous buffoonery, her pleasure in committing crimes comes more from the adrenaline rush of transcending social, psychological, and physical boundaries and provoking reactions from those around her. That’s what’s the most fun for her. Joker does what he does to entertain himself, and so he often doesn’t much care whether he wins or loses. But Harley is much more performative in her motivations; she commits crimes in order to amuse, scandalize, and/or horrify others – her victims are her audience, whereas Joker’s are more like unwilling straight man in his routine.

You can see this in the movie, too: after Harley believes that Joker has been killed, we see her quietly mourning when she thinks she’s alone – but as soon as someone else shows up, she immediately resumes the coquettish jester routine. Watching herself reflecting in feedback from others is what gets her off. In other words, she does it for the thrill that comes from shocking ordinary people. 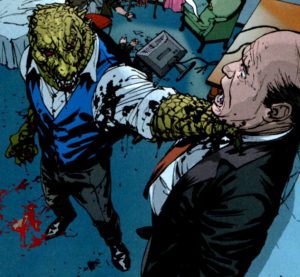 Waylon Jones isn’t really a crocodile, he just has a condition that’s hardened his skin, dramatically increased his strength and aggressiveness, while decreasing his intellect. How intelligent he actually is varies a lot in the comics, but we know that at one point in his earlier life he was almost normal, relentlessly and cruelly bullied for his appearance. These days, at times he’s practically more like an animal than a human, and has been known to eat people.

So his psychopathy can be a bit of a complicated issue. In the movie, for instance, it’s explained that “people treated him like an animal, so he became an animal,” at least strongly implying that his motivation and behavior is psychological – the result of the abuse that he suffered because of his “disability,” if you want to call it that. On the other hand, it’s just as often implied that his condition itself has affected his mind, turning the man into a predator, making it more of a biological thing. Does it make sense to call an animal a psychopath? Even if its behavior would be considered psychopathic if a human were to do it, in non-humans we just call that following one’s nature, don’t we? Does it matter that Croc at least started off life as a human? To what extent are we willing to give him the benefit of the doubt?

Well, maybe up to the point at which he takes a bite out of us. 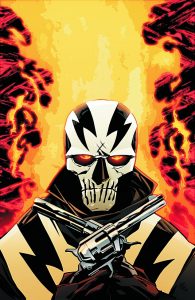 This is an interesting one, because in the movie, by the time we meet El Diablo he’s actually reformed – he’s realized the error of his ways in the past and has sworn never to use his powers again. Those powers being pyrokinesis – he can create and control fire, including making extremely elaborate and lifelike fire sculptures.

Chato Santana was a gangster who used his powers to terrorize and destroy his rivals, turning himself into the most dangerous man on the streets. In the movie, he tells of how as his power among the gangs increased, his fire powers grew right along with it – and it worked both ways: the more powerful a villain he became, the greater his influence. “Power lust” describes his alignment perfectly at this point.

After flipping out and accidentally killing his wife and children, though, he realized what he had become. By the time we meet him, it’s hard to call him a villain anymore at all – he’s determined not to use his powers anymore because of all the destruction they’ve wrought, but for narrative purposes it’s more like having this dramaticallly overpowered character as part of the team without breaking the story right from the beginning. 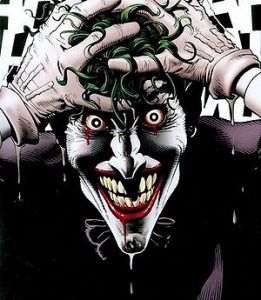 Technically Joker isn’t part of the Suicide Squad team at all, but he’s a presence in the movie and always at the very least a lingering echo anytime Harley Quinn is involved. Joker’s modus operandi is pure destruction. In Dungeons & Dragons he’d be chaotic evil, but in this schema he’s the purest nihilist that the DC Universe has to offer. Existence is the ultimate joke, and his only real desire is to break down any appearance of fairness, predictability, or security that he can find. There’s nothing funnier than watching people cope with senseless death and destruction – which, to Joker, is the only thing there really is in the world, and anything else is pure delusion. All real comedy comes from revealing truth, sometimes difficult truth, pointing out that the Emperor has no clothes, saying what everyone kind of already knows but no one is willing to say. That’s what Joker does.

Spreading chaos is his pleasure, and he does attract followers – he’s always got his henchmen when he needs them. Harley, though, is different. She wanted to understand him, and that’s how she fell in love with him – but at the same time, she ended up losing herself to his particular brand of crazy. While she’s not nearly as crazy as he is – she actually believes, for instance, in love, she genuinely dreams of saving him and retiring to a completely conventional, heteronormative life together – he delights in having transformed her, having ruined her to the extent that he did. Having turned her, at least partly, into a version of himself. 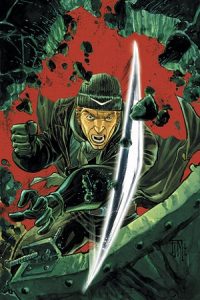 Okay, I made that one up. It fits, though. Maybe in the next edition!