Spoilers through all of Season 6 of Game of Thrones.

In Game of Thrones, the Season 1 death of Ned Stark and the Season 3 death of Robb Stark are supposed to be the ultimate subversion of the hero trope: Our Noble Man gets his head chopped off on the whim of a child, and His Even Nobler Son gets his chest ventilated by his turnclock bannerman. These deaths, along with so many others, are sometimes interpreted as sending a message to the audience: no one is safe.

But is that really true? I know one of the complaints I have occasionally seen about the show is that some of that sense of stakes has gone away: certain characters (*cough* Jon Snow *cough*) seem like they are invincible (*cough* Arya Stark *cough*), surviving in seemingly implausible ways. So what gives? Did George R.R. Martin go all soft on us? Did Weiss and Beinioff lose their nerve when the time came to go off-book? 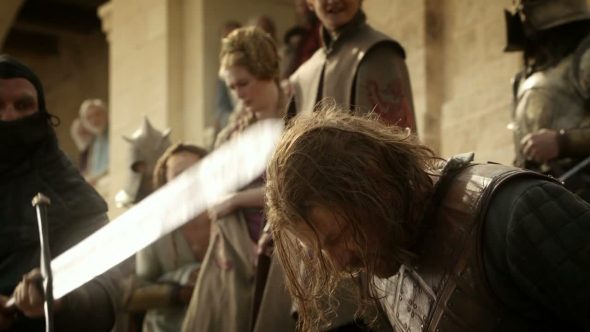 “If you say in the first chapter that there is a rifle hanging on the wall, in the second or third chapter it absolutely must go off. If it’s not going to be fired, it shouldn’t be hanging there.”

The Gun is a reflection of the fact that stories necessarily require editing. You’re telling this story, when you could be telling literally any other story; and as you tell that story, you’re choosing to include these details, while omitting others. That means the stories you choose to tell, and the details you choose to include in them, should be there for a reason.

The Gun isn’t a law – the concept of a “red herring” is a detail that looks important, but turns out to be just a way of throwing the audience off the trail. Sometimes a Gun might be included so that the trope can be subverted later – perhaps the gun turns out to be a fake, with a little “BANG!”; maybe it’s loaded with blanks; maybe the protagonist is about to shoot the gun, but throws it out the window at the last minute, renouncing violence at long last.

The gun need not be literally “fired” in the later parts of the story – the gun just has to be there for a reason.

And here’s the thing: characters are the ultimate Chekov’s Gun. These people are part of this story for a reason. And this means that until that reason has manifested iteself, that character can’t die. When a work of fiction takes time to pay a lot of attention to a particular character, that character becomes like the gun hanging on the wall – until he or she has been fired, they can’t be killed off. 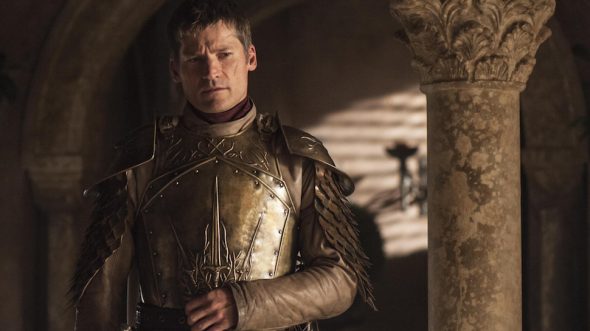 The invaluable website TV Tropes refers to this as “plot armor” – the powerful force field that protects protagonists from harm. If it’s really true that “no one is safe” in Game of Thrones then plot armor shouldn’t exist – it should be every bit as likely that Jon Snow gets killed by a random arrow as it is for some random extra in the background. But of course, that’s not true – it was pretty clear from the beginning that Arya wasn’t really going to die at the hands of the waif, just as it was clear that Dany wasn’t really going to be raped and murdered by the Khals of the Dothraki.

How then, to explain the death of Ned Stark?

What we have to remember is that when Ned lost his head, his job in the narrative was done. He had his arc, discovering the truth about Joffrey, Tommen and Myrcella’s parentage, making the “honorable” move by telling Cercei, and then getting caught in Littlefinger’s trap. That was his story: the only thing left for him to do was die, and so he did.

To a lesser extent, Robb Stark went the same way – his honor had cost him his Kingdom, and all he had to do was die so that the rest of the story could move on. Those characters weren’t safe because their stories were done – they had played their hand, and lost.

The only reason their deaths were so surprising is because Ned and Robb Stark look like the sorts of heroes that are normally blessed with plot armor – they were strong white male warriors with a noble lineage and an implacable sense of honor. Those guys always make it to the end credits (or at worst, die heroically saving the world in the final minutes).

Contrast that with the characters of Jon, Arya, Dany and Samwell. At the outset of Season 6, where are they in the wide world of Westeros? 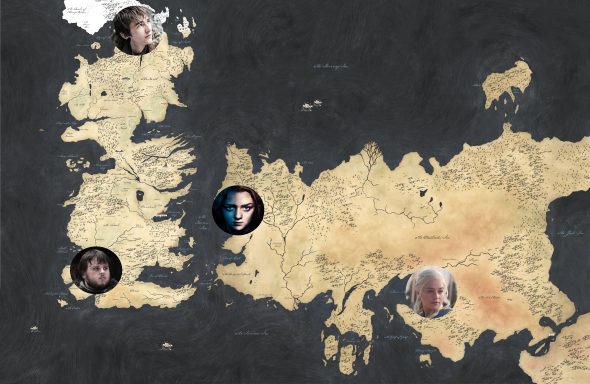 The Four Corners of the Game of Thrones World

That’s right, they are essentially in the four corners of the world: Bran in the northwest, Arya in the northeast, Dany in the Southeast and Samwell in the southwest.

More importantly, those characters are essentially alone in their respective parts of the world – not literally (in the sense that they are hermits), but narratively. The characters they interact with are, by and large, only important in so far as they effect the main character – Daario is only here in this story because he pals around with Danaerys; Jaqen is H’gar only here because of Arya; Gilly because of Sam, etc., etc.

In real life, you can move to the far east and learn martial arts from a master so that you can take revenge on the man who killed your family, and then you can die in a shipwreck on the way home. No tidy arc, no foreshadowing, just random death.

But if you’re telling a story, and the daughter of the noble lord is going to die in a shipwreck before she ever lays eyes on the people who killed him, we don’t bother telling that story at all.

In a big sprawling epic like Game of Thrones, the whole idea is that these characters will all be interacting with each other. We’re not watching an anthology series, where stories can share a universe without connecting narratively. We’re watching a piece of serialized drama, purportedly showing us all of the most interesting moments in a single story. These characters are chosen as focal points because they all matter to each other.

So the geographic locations of these four characters are the most powerful plot armor they could ever hope for. If you’re not hanging out with other main characters, you’re not making stories together, which means your story probably isn’t over yet. The worst thing that can happen to a character on Game of Thrones is to end up in the center of the map: it’s no coincidence that King’s Landing and the Riverlands have been a charnel house for main characters. That’s where people interact with each other, and once you’ve started changing the arcs of other main characters, you’re at risk. 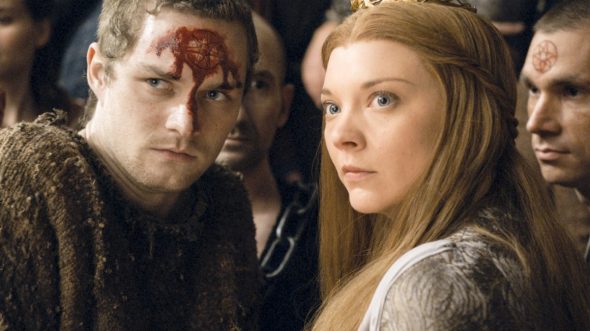 Like Chekov’s Gun, these characters were introduced in Season 1 and fired in Season 6. (Too soon?)

For Bran, Dany and Arya, they literally can’t die until they return to Westeros (or, in the case of Samwell, until he leaves the Citadel). They need to get back to the action if their stories are going to matter.

Think about what would happen if Dany had died at any moment before the Season 6 finale – what would the purpose of her story even been? Why would we have cared about anything that happened in Meereen, a literal world away from all of the other characters that we are interested in. The only purpose to spend all this time showing us how Danaerys became a conqueror is that we know who she is and what’s she’s capable of when she comes back to Westeros and starts conquering people.

Ditto with Arya – no one in the house of Black and White has ever so much as spoken to any of the other characters on the show. So if Arya had actually been killed by the Waif, what in god’s name would we care about anything she had done up to this point.

Samwell may have been vulnerable early in the show – when he was just the first among equals of Jon’s Black Brothers, but as soon as he got on that ship to Oldtown, he was safe as ever: a man of the Night’s Watch sent to Oldtown to become a maester in Season 4 had better actually get to Oldtown at some point along the way. Until he does – and until he does something to make that trip matter – he’s safe.

And finally, we have Bran. He’s been of on his own for a long time, having visions and learning to be the Three Eyed Raven. He just learned that R+L does indeed = J, but at this point it’s just him and the audience that know this crucial fact – he actually has to come back to the world and start telling people about it before that plot line matters. And so until that happens, he’s safe, protected by the mystical force of Plot Armor. 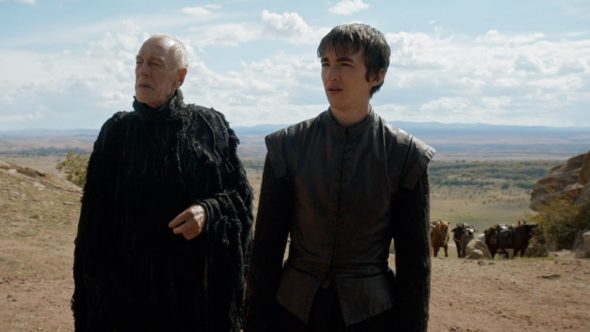 None of this is a complaint, mind you. Plot armor is just part of the nature of story telling, and I never really believed that “no one is safe.” We can subvert tropes strategically sometimes, but at the end of the day, we don’t want our time wasted – we want the elements of the story to actually matter. And for that to happen, our characters need to be interacting with each other, effecting each other’s arc. And while our characters were spread to the four corners of the world, that was impossible, and so they were safe.

The good news for the “no one is safe” crowd is that this geographic plot armor is wearing off fast: Arya is back in the Riverlands, Dany is already speeding towards the Seven Kingdoms, and Samwell and Bran will probably be heading that way before too long. For the time being, they’re guns just sitting on the wall.  But eventually, their stories will be over – and then they might be too.

8 Comments on “Chekov and why Arya, Dany, Bran, and Sam Are Safe For Now”