Fallout 4 has been occupying our time and our consoles/PCs for months now, but the Fallout series as a whole has been a subject of our thoughts and our overthoughts for years. Here we present The Definitive Fallout, a path into how and why these games are so compelling for brains as well as thumbs.

A series of post-apocalyptic video games. Inspired by sleeper hit Wasteland (1988), the first Fallout game was released in 1997. It was built around the sort of isometric, stats-driven, point-and-click gameplay popular in RPGs at the time. Due to its clever writing and engaging story, it became popular enough to spawn several sequels. Fallout transitioned to an assisted FPS-style gameplay in 2008 with Fallout 3. Today, the Fallout series includes its latest major instalment, Fallout 4, as well as the mobile app Fallout Shelter.

Each game takes place in a slightly different location or time period, but the core of the setting remains constant: generations after a nuclear war devastated the planet, in an America which advanced technologically but stagnated socially at some point in the Nineteen Fifties. Gee-whiz triumphalism rubs elbows with power armor sci-fi. Those few human survivors who couldn’t ensconce themselves in Vaults to avoid the holocaust have either mutated into ghouls or adapted to a scavenging life in the wasteland.

What Makes Fallout So Overthinkable?

Fallout is more than just a post-apocalyptic adventure, an FPS shooter, or an open world sandbox full of collectibles and sidequests. It has personality in a way that many modern games don’t. A Fallout game looks, sounds, and feels distinct from other games in its genre for a number of reasons.

A New Life–Underground: The Fallout series is most known for its retro sci-fi aesthetic: the future as envisioned in the Fifties. Given that your only exposure to this fabulous tech is generations after a global nuclear war, all this optimism is tinged with irony. The most memorable examples of this are the PSA-style films played in every Vault, starring everyone’s favorite – Vault Boy!

The ambient music in these games, aside from the original score, is also derived from the Fifties and Sixties: Louis Armstrong, the Ink Spots, Bing Crosby, Nat King Cole, and other greats. Rummaging through the rad-blasted remains of the American suburbs, you’ll find women’s housecoats and men’s gray flannel suits, or high-waisted shorts for leisurely summer barbecues. On rare occasions (Fallout 2 most memorably), you’ll find a working car: a souped-up American cruiser with oversized fenders and a fissile engine. But even if you don’t get one working, there’s plenty of rusting wrecks dotting the landscape.

This manifests not just in the look, but in the gameplay elements as well. Nuka-Cola has been a staple throughout the series, evolving from a background prop in the early games to a cheap source of healing in the later installments. Protagonists can collect books that boost their skills, with titles evoking the pulp and popular publications of the era: Grognak the Barbarian, Pugilism Illustrated, Nikola Tesla & You! And many of the sidequests – most famously Fallout 3‘s Operation Anchorage – evoke the Cold War paranoia that that generation’s remembered for.

This isn’t just any future. It’s a particular future, one where the brinksmanship and the fashions of the Fifties both lived far longer than they had a right to. 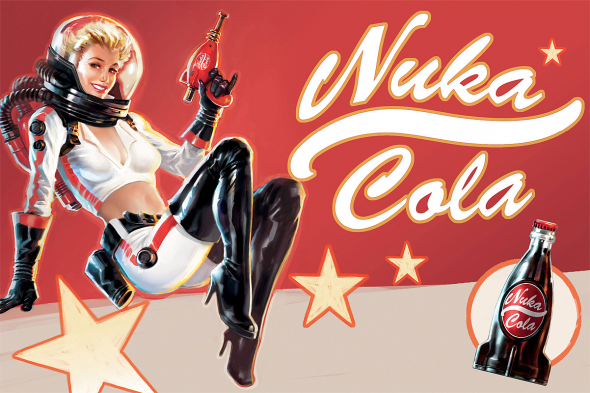 Wham, Bam, Thank You Ma’am: It’s not just frustrated housewives and square-jawed suburbanites traipsing through the ash, of course. The Fallout series has also demonstrated a kitchen-sink attitude toward its inspirations, tossing in elements from both hard and soft sci-fi.

The original Fallout introduced us to super mutants, hulking green masses of muscle that were the product of a mad scientist’s evolutionary experiments. Since then, wherever the game has taken us – from the West Coast to the mid-Atlantic, from New Vegas to the Commonwealth of Massachusetts – those jolly green giants have followed. We’ve also encountered ghouls: humans who’ve adapted to the radioactive ruin and learned to thrive on it. Ghouls fill the role of the game’s zombies: feral, skinless, and ready to be shot en masse. 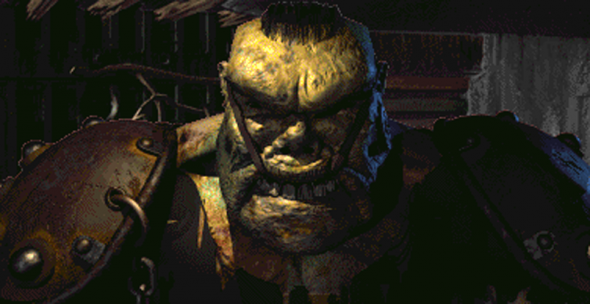 But these monsters aren’t just antagonists. Respectable ghouls live in every corner of the Wasteland, sometimes as tolerated outsiders on the fringes, sometimes in outposts given over entirely to ghoulkind. Though super mutants are primarily baddies in the original Fallout, you’ll start to encounter friendly ones – or at least civil ones – in Fallout 2 and every game thereafter. Ghouls and super mutants can be engineers, law enforcement in border towns, or even rise to the ranks of mayor! It’s all part of Fallout‘s ironic reversal of expectations and postmodern self-awareness. 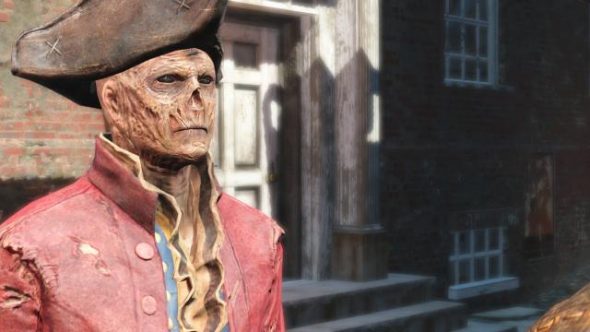 Mutants and zombies aren’t the only well Fallout draws from. The series hints at alien observers and government coverups from the beginning, with the presence of “Zetas” becoming gradually more explicit over time. With these aliens come psychic powers, far-out laser weaponry, and military experiments – or rather, the remains of military experiments that you discover. Of course, in a world of ghouls, super mutants, and rabid molerats, who’s to say that big-eyed aliens with laser pistols are any weirder?

Human tech has also advanced significantly, up to the time of the Great War and in the generations thereafter. Your character may find and install cybernetic implants that make them tougher or faster. Androids – synthetic humans, or “synths” – are introduced later in the series. You might even learn how to teleport! And I haven’t really talked about power armor. 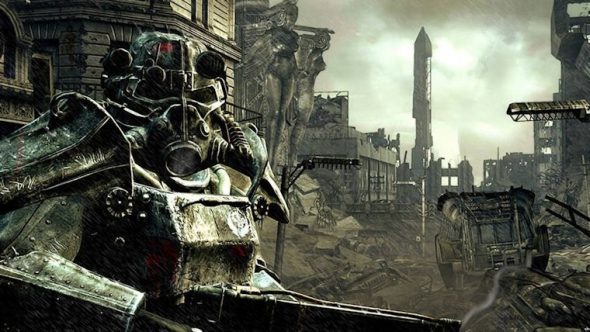 When it comes to introducing sci-fi trappings, the Fallout writers want evocative coolness first, gritty realism second. Depending on which instalment you’re playing, you might wander the Wasteland with a ghoul sidekick and a cybernetically-enhanced dog, wearing power armor and toting a laser rifle, hunting down high-tech components until you’re sidetracked by a Lovecraft-inspired sidequest. And that’s normal! Or what passes for “normal” in this series. Encompassing all these possibilities in one setting can be done, so long as you keep tongue planted firmly in cheek.

You’re S.P.E.C.I.A.L.: As you may have gathered already, there’s a generous level of irony ladled into Fallout from beginning to end. It’s not a gritty tale of postapocalyptic survival, or not just that. It’s also a tale of collecting Nuka-Cola for a soda-crazed inventor, or rescuing a Trader named Vic, or infiltrating a cult of Elvis-worshipping mob enforcers, or rummaging through a comic book shop with a Shakespeare-quoting super mutant. Fallout takes itself seriously, but not too seriously.

Any dark tale needs occasional levity to keep it from being a grim slog. But Fallout‘s humor is baked in. Sometimes, it’s gentle, optimistic humor: the triumph of hope over painful experience. But oftentimes it’s a dark humor, snuffing out lives for ironic or absurd reasons.

Why all the joshing? As mentioned, part of it is to lighten the otherwise oppressive surroundings. Most of humanity was wiped out in a nuclear holocaust or the chaos that followed, after all. The Earth has been blighted as a result; what once was green is now brown and rusted. Considering how often your main Fallout quests leaves you stranded and far from home, you need some laughs to look forward to.

But part of it may also arise from the philosophical / social tradition of heightening the contradictions. It’s an idea born from Lenin and Hegel, but now deeply nestled in pop culture, like most of radicalism. Heightening (or accelerating) the contradictions means to take action to point out the incompatible elements of a system. In radical politics, this can mean staging protests or displays that force the police to intervene violently, in order to make the proles watching at home less comfortable with cops.

(There’s some debate over whether heightening contradictions is something that socialists should do to hasten the final days of capitalism, or whether it’s something that capitalism will do to itself anyway, or whether that’s even a meaningful debate since we’re all in a capitalist system already so anything we do is part of that system destroying itself … but that’s neither here nor there) 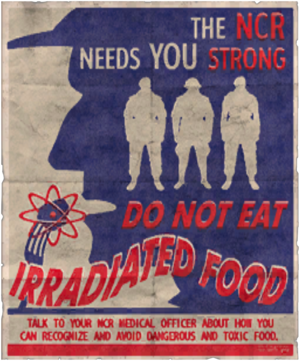 In any case, heightening the contradictions had its place in art long before activism. Take a status quo comprised of broad but recognizable stereotypes. Bump these stereotypes against each other until their friction starts a fire. Run around in the enusing chaos until, through luck or virtue, peace is restored. This is commedia dell’arte or the funnier Canterbury Tales: a lecherous old man encounters a pompous scholar, is tricked by a scheming servant, unwittingly loses property to a greedy merchant. This is Shakespeare and Moliere. This is The Office, where a team of otherwise sensible people are subordinated to a buffoon by virtue of the corporate chain of command, devoting their wit and effort to carrying out his bizarre schemes (hey, maybe this is anti-capitalist subversion!).

Fallout takes place in the aftermath of the nuclear-tipped nation state, where the Prisoner’s Dilemma forced the great powers into a conflict that none of them would rationally choose. It brings the forces of consumerism (Nuka-Cola!), the military-industrial complex (Gatling lasers!), and the human instinct to survive (raiders!) into crisis. It asserts that we can not live long, or live well, in a world where everything, including an atomic war, is available at the press of a button.