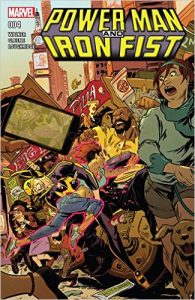 Wrapping up the first story arc in the reignition of the partnership between former Heroes for Hire, Luke Cage and Danny Rand, of course this issue is largely devoted to the final battle between the two heroes and their ex-office manager, Jennie Royce, released from prison and out for some misplaced revenge with the power of the mystical Supersoul Stone.

Structurally, this issue is put together really well. The high action is intercut with flashback scenes that give us some insight into what Jennie went through after being convicted for the murder of her ex-boyfriend – despite the fact that not only was he (Eugene Mason, also known as the hero-but-not-really-hero Crime-Buster) abusive toward Jennie but that Jennie herself was possessed by a demon at the time of the murder and so legally, you would think, not responsible.

She forged a friendship with gang leader Black Mariah Dillard, one of Luke Cage’s villiains from wayback, while at the same time nursing a grudge against her former employers for being unable to keep her out of prison despite everything she’d done for them over the years. Upon her release, she manipulated Luke and Danny into acquiring the Supersoul Stone for her from albino mobster Lonnie “Tombstone” Lincoln, and as we join the fight here she’s been transformed by the Stone into some kind of punk rock dinosaur crossed with Blanka from Street Fighter II.

There are lots of things to like about this series so far, although I feel like it hasn’t quite yet lived up to the potential of its first issue and premise – a lot like Doctor Strange, as a matter of fact. The best part is probably the dialogue, and particular the banter – not only between Luke and Danny, who talk and tease each other like old friends, but, surprisingly, between Tombstone’s henchmen, who are legitimately hilarious without feeling too much like versions of 21 and 24 from Venture Bros.

That said, Black Mariah’s very stereotypical mannerisms are uncomfortable for me to read but I’m not sure whether that’s the comic’s problem or mine. Similarly, I’m not sure whether it’s deliberate or not but Jessica Jones, now married to Luke Cage and seen so far doing nothing but hanging around the house with their baby, seems almost abusive toward Luke, controlling his behavior and speech (he’s not “allowed” to swear anymore, for instance, although she doesn’t apply the same rule to herself) and basically treating him like some kind of juvenile delinquent instead of an adult and ostensibly her equal partner in the marriage. Jessica Jones is a complicated character, and obviously Luke wouldn’t have been interested in her in the first place if she were some cowering submissive, but I’m not sure if this is something that’s is being set up to be addressed as an issue in their relationship or if it’s just falling back on the stereotype of the nagging wife for cheap laughs. I wonder how long it will take to find out.

Where to Start: Power Man and Iron Fist #1 Time commitment:  3 issues
Recommended if you like this: Street Fighter Classic Volume 1: Hadouken 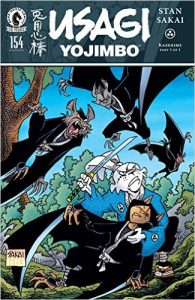 Bad weather has been a recurring theme over this recent stretch of standalone Usagi stories. Here, Usagi comes upon a gravely injured komori (bat) ninja, a member of a clan that he has battled many times and which has caused him no end of troubles.

(The last two times I wrote that sentence my computer crashed; I’m hoping that the problem is just that some new Hearthstone update is causing grief and not that I’ve got some komori hackers all up in my rig. In case anyone out there wants to buy me a new computer, I’ve had my eye on something like this.)

Because he’s Usagi, obviously, he can’t just leave her there to die in the storm so he picks her up and takes her to a nearby temple, where he nurses her back to health, or at least back to consciousness at which point she can take care of herself. The following morning she admits that she is indebted to Usagi for saving her life – in fact that no stranger has ever shown her such kindness – and he gets on his way.

We know, of course, that by the end of the issue the two will cross paths again. What comes as more of a surprise is when Usagi meets Yamaguchi Kyosa, a hired sword who had tried, only a few issues ago, to prevent Usagi from delivering a valuable (albeit useless) suiseki to Lord Akagawa. Now, though, these former enemies have no animosity whatsoever – to paraphrase Ice-T: it’s not personal, it’s business.

Stan Sakai uses the convergence of these three characters to emonstrate the contrast between some very different conceptions of honour: Usagi, the samurai’s; Yamaguchi, the mercenary’s; and Kazehime, the ninja’s. Honour is a funny and sometimes contradictory thing (just ask the Klingons), and this issue acts as an effective and entertaining exploration of the variations on the same basic concept in this transformative era in Japanese history. Although they all contradict each other, each of these warriors has his or her own code of honour which they are prepared to follow to the death. And even if none of them find the other’s path particularly practical or even moral, they all fundamentally understand and respect the adherence of the others’ to their code.

Where to Start: Usagi Yojimbo Book 1: The Ronin Time commitment: 200-ish issues
Recommended if you like this: New Jack City