We knew this year’s party was gonna be big when Time Out New York made a list of Places to Watch Eurovision, and we were first.

Time Out New York, thank you so much for referring to us as a “pop culture brand.” But we wouldn’t be us if I didn’t point out “it’s” does not need an apostrophe in this case.

We were delighted and humbled to see well more than a hundred people at the Liberty, and it was a hell of an afternoon. If I were to add my own award, it would be to the EBU, for Best New Scoring System. Starting this year they gave out the jury votes country by country, and then announced the cumulative points that the televotes added. This is tricky to explain (I know I didn’t understand it until it was halfway over), but in practice it makes the announcements crazy suspenseful, since they award the points in ascending order. Australia was way on top after the jury voting, but the question was whether their cushion was big enough to protect them from countries that got more in the televoting (it wasn’t). And then when Ukraine took the lead, the question was whether Russia, which had the most televotes overall, could make up the difference (they couldn’t). The hosts announced each country and point total with almost comically long dramatic pauses, and the entire bar was glued to the television like it was the moon landing.

So thank you to the Liberty, to everyone at OTI who contributed to this project over the past few months, and of course to all of our fans who watched the videos. If you missed any (and you probably did!) here’s the entire playlist of 44 videos.

Next year in Kiev. 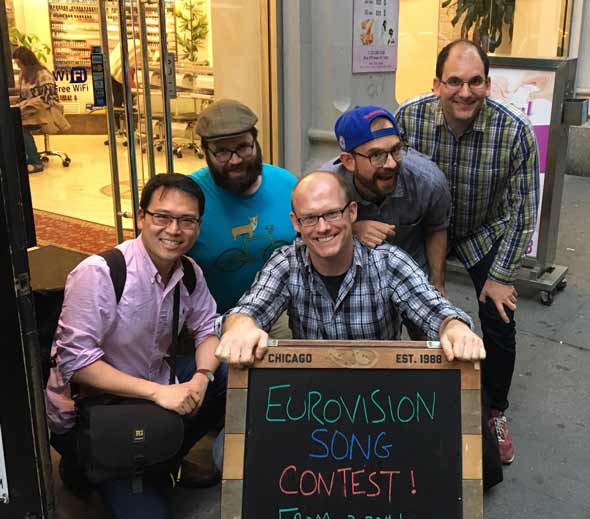