It’s been a long time since the last Reading List (also: since I rock and rolled) because I’ve actually been writing articles lately. So I’m not going to inundate you with all the comics I’ve read over the last couple of weeks, but only the ones about which I’ve got something interesting and/or important to say. Does that mean that some of the things I say are not interesting and/or important? No. I did not say that. 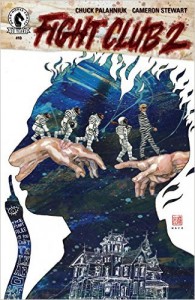 In which Chuck Palahniuk craws completely up inside his own butt. I’m now convinced that this was never meant to be a real, earnest sequel to Fight Club but rather a satirical response to demands that he write one, showing us all the reasons why he shouldn’t have. Most of this final issue is devoted to Chuck sitting with the women in his writer’s group arguing about how the series should end. Evidently he exists on the same layer of reality as Tyler and Marla and all his characters. This is never explained. Nothing is ever explained. Which would be fine if any of this went anywhere or was, you know, interesting or entertaining at all. It’s not even good metafiction, it’s just confusing and annoying. Look, whatever Chuck Palahniuk writes next, I’ll buy it and I’ll read it. I’m just sad and disappointed that the last thing he did was this.

Where to Start: Fight Club 2 #1  Time commitment: 10 issues
Recommended if you like this: Sin Titulo 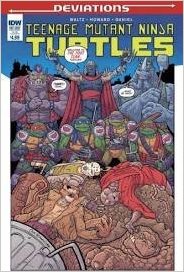 The Deviations series of one-shots are basically IDW’s version of Marvel’s What If? – stories based on alternate resolutions to events in the comic’s past, following up the universe in which something different happened instead of what occurred in regular continuity. Here, we revisit one of the few completely original (and one of the best) ideas from IDW’s TMNT series and see what could have happened differently: in the regular series, Shredder captured and brainwashed Leonardo into turning against his family and joining the Foot Clan instead. Of course he eventually returned to the Light Side, but what if instead of that, Shredder had been able to turn all the Turtles to the Dark Side instead?

Some time after the Turtles join Shredder, the Foot Clan seeks to locate and destroy Splinter once and for all, while Splinter assembles a team of sympathetic mutants to attempt to get his sons back at any cost. Most of this issue is a long and elaborate battle sequence – but a very well-done one. While the story is not too complex, what really stands out here is the fantastic art from penciller Zach Howard. I haven’t been a huge fan of all the artists that IDW has had on their TMNT books, but Howard here gets the tone just right: dark and dirty, thick and kinetic, the perfect way to draw this violent and disturbing story. It’s worth it for the art alone, but if you also want to see what would happen if the Turtles ever went bad, this is a good place to look.

Where to Start: It’s a one-shot! Time commitment: None!
Recommended if you like this: Teenage Mutant Ninja Turtles: City Fall Part 1 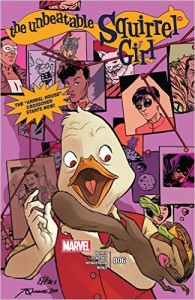 The crossover that YOU demanded! Actually, I think this is a crossover that I may have literally demanded. Squirrel Girl meets Howard the Duck! Two of the best, funniest writers in comics team up for this one and, no surprise, it’s one of my favourite issues of the series so far. I think Squirrel Girl keeps getting better and better as we get to know Doreen better; this issue in particular struck me with how the book portrays its heroine as so casually, effortlessly silly but still totally earnest about fighting evil using not-always-fighting-but-still-sometimes-fighting. We get great character-development stuff like Doreen telling Nancy about the three-hundred-year-old vampire cattle Hellcow while discussing the pros and cons of having multiple superhero costumes.  Suddenly, Nancy’s cat mew is abducted by Howard the Duck, who has been hired to find a missing cat and thinks all cats look the same (kinda racist?), and they’re both accosted by the return of Kraven the Hunter!

What’s great about Squirrel Girl is how unapologetically weird and nerdy she is. She makes puns like nobody’s business and geeks out about programming and science facts and completely owns it. It’s charming as hell but also makes her a pretty unique and refreshing personality type in superhero comics, and there’s a lot of that stuff in this issue. Add to that Erica Henderson’s art, which made me laugh more times in this issue than probably any of the previous ones. Doreen’s facial expressions are just golden and make a lot of the jokes shine extra bright, plus her action poses – for instance, when she’s jumping out a window or waiting to fall back to earth after being launched into the air by Kraven – have me giggling for minutes. It’s such subtle stuff, but it makes all the difference.

Added bonus in this issue is Howard writer Chip Zdarsky joining Ryan North in the super secret alt-text at the bottom of the pages – it’s just like hanging out with a couple of award-winning Canadian cartoonists in a blank white space!

Where to Start: Unbeatable Squirrel Girl #1  Time commitment: 5 issues
Recommended if you like this: Commander Keen (warning: not a comic book. Just trust me.) 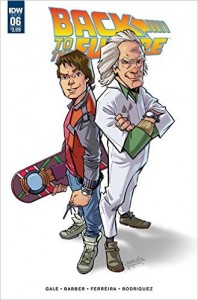 Back to the Future #6
IDW Publishing

When it was announced that IDW’s Back to the Future comic, originally intended to be a 5-issue miniseries, was going to become an ongoing title instead, I was worried. It could have just been a cash-in: they had five issues’ worth of stories, but people were buying the book, so why not keep going until the readers’ pockets were empty? Fortunately, I had nothing to worry about, because this latest issue, first in the new ongoing series and beginning of Marty’s adventures post-BTTF3, is actually really amazing and goes in a direction I wouldn’t have expected.

Back from the future, the alternate present, and the past, it’s now 1986 in Hill Valley California and Marty McFly is bored. He’s had a couple of weeks of adventures and now, at the ripe old age of 18, it seems as if his life has peaked. School is a chore, his once-coveted and then beloved truck has lost its shine (not literally, though – Biff has seen to that), and even his relationship with Jennifer doesn’t seem exciting anymore. Marty’s jaded attitude is, naturally, alienating Jennifer, and even bully Needles, who is himself trying to turn over a new leaf, complains that “You’re no fun anymore, McFly.” As a matter of fact, Marty is beginning to feel a certain amount of kinship with Biff; check out this exchange:

Marty: “You ever feel like all the best stuff already happened? Like your greatest days are behind you?”

This is a direction I could not have forseen the series going – not unless I had a time machine. And I’m really delighted by how surprised I am by it. Of course, it’s not all Marty having an early mid-life crisis: he and Jennifer get a letter from Clara in the past that Doc has disappeared without her and the kids and now Marty and Jennifer have to try to find him only using the clues available in 1986.

Unlike a lot of other comics that purport to continue the stories of their source material, it feels like this one actually has something new and interesting to say. At least so far. This is only the first issue of the ongoing story, of course, but as much as I enjoyed the first five issues I had pretty low expectations going into this one. I’m glad to have been wrong. I guess it really is true that the future hasn’t been written yet!

Where to Start: Back to the Future: Untold Tales and Alternate Timelines  Time commitment: 5 issues
Recommended if you like this: Ghostbusters: Total Containment 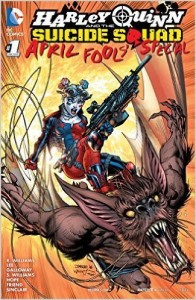 Harley Quinn is one of the most interesting characters that DC has – and they know it. Back when Paul Dini created her for Batman: the Animated Series, she wasn’t much more than a one-note character, just a random henchwoman of the Joker’s. But she’s turned into such a psychologically complex character, which is certainly a huge amount of her appeal. Dr. Harleen Quinzel was a psychiatrist at Arkham Asylum who, after longterm psychoanalysis of the Joker ended up succumbing to the Florence Nightingale Effect and falling in love with the Clown Prince of Crime, helping him escape and becoming his sidekick. Joker, unsurprisingly, turns out to be an exceedingly abusive boyfriend, and Harley Quinn, as she became known, suffered his cruelty with sometimes more and sometimes less acceptance. The character made the transition from the cartoon to mainstream DC continuity, and Harley eventually left the Joker and moved out on her own.

Not only is Harley Quinn, the character, both brilliant and funny to her core, she’s also one of the only characters in superhero comics to have been in a realistic abusive relationship without being reduced to a one-dimensional “woman in an abusive relationship” kind of character. And even now that she’s away from Joker, it’s not like she’s a hundred percent free of him – that kind of thing, the kinds of things that he did to her when they were together – tends to stick with you and recovering from that kind of trauma is a process rather than an event. In other words, she hasn’t been reduced to her costume or her powers like so many other supervillain characters. She doesn’t even have any powers. She’s just kind of a kickass person and you can tell lots of interesting stories with her.

So this comic is basically a reintroduction of Harley to the Suicide Squad, a revolving group of bad guys hired by the government to be a plausibly deniable asset for accomplishing dangerous tasks in exchange for clemency or time off from prison. Here we have her being inspired to start a therapy group for supervillains who, it turns out, actually have a lot of serious problems they could use help with. It’s a fun issue, although I don’t think it’s as much fun as the Amanda Conner ongoing Harley series. This version of the character is part of the Suicide Squad, of course, in anticipation of the new movie, which hopefully will be less dour and, uh, bad than the Batman v Superman movie in which universe it takes place.

Where to Start: Another one-shot! Time commitment: No commitment necessary
Recommended if you like this: Suicide Squad Volume 1: Kicked in the Teeth

One Comment on “Harley Quinn tames a giant bat! You won’t believe how!”