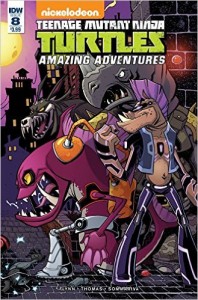 The theme of teamwork (or the team of themework, I’m not sure which) is predominant in this issue, wrapping up the “Job Security” story started in the last issue, where the dueling duos of Shredder’s henchmutants, Xever and Rahzar, and Bebop and Rocksteady, each worried about the other pair making them redundant in Shredder’s eyes, set out to capture and eliminate the Turtles to prove their worth. As it turns out, the synchronistic combination of their efforts end up succeeding where either one individually would have failed, and as we open here, the Turtles are trapped!

Now the Turtles, imprisoned in metal cages, have to use their wits to escape. The solution, of course, is to use teamwork against teamwork. The fact that the Turtles are a team (not to mention a family) has always run deep in the franchise, as has their enemies being united more against them than with each other. United we stand, as they say, and divided we fall (an appropriate sentiment with the upcoming release of Captain America: Civil War), and so the Turtles foment tension from within, goading the villains into physically turning against each other until Bebop unintentionally frees Leonardo – and from that point on, the Turtles are in control. The villains lose their captives but learn their lesson: as much as they hate each other, from here on out they’ll work together to take out the Turtles. Next time they’ll be much deadlier, taking on the Turtles’ greatest strength for themselves: their togetherness. 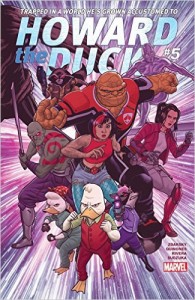 Howard is rescued from The Collector by Silver Surfer, Scout (Galactus’s self-appointed herald), the Guardians of the Galaxy (which now includes The Thing and Kitty Pryde), and the gender-swapped cloned Linda the Duck and Shocket Raccoo, plus Howard’s friend the shapeshifting Tara. Besides that, not a lot happens in this issue – which is fine, since this is really the climax and culmination of the “Howard is a Living Nexus” storyline that I’ve been talking about since it started. More than the plot, it’s the action-packed visuals and always-great dialogue that drives this issue forward; by the end, Howard is separated from the Nexus but not totally separated, allowing him to use it to travel wherever he wants. Since the beginning of this volume of the series, of course, all Howard has wanted was to go home – back to his home dimension, where everyone is a duck (which actually sounds like a pretty adorable place to be). Yet when, at the end of this issue, he gets his wish, and the Nexus sends him “home,” it’s not to Duckworld but to the coastal house of Howard’s one-time companion, Beverly Switzler!

Where to Start: Howard the Duck Volume 1  Time Investment: 4 issues
Recommended if you like this: All-New, All-Different Avengers Volume 1 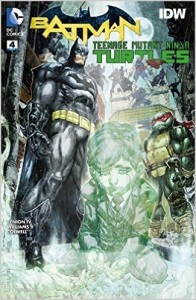 One of the things I’m most loving about this crossover is that it’s being given time to breathe; “decompression” is much decried as a storytelling technique in comics these days, but giving the Turtles and Batman six issues to coexist means that you can have stuff like what happens here: most of the issue devoted to setting up the second half of the series, with the Turtles and Batman training together, sharing some pizza, and generally biding their time as they formulate the next stage in their plan to defeat Shredder (now, unknown to them all, aligned with Ra’s al Ghul) and return them all home before the mutagen in their blood destabilizes from exposure to the different subatomic laws of this alternate dimension, turning them all back into ordinary animals.

Raphael, though, does not share my enthusiasm at all this downtime. Not only is he fed up with what he perceives as sitting around doing nothing, but he also questions – vocally, to his face – Batman’s cred as a hero. Raph calls out Batman as a “thrill-seeker…some rich guy who puts on a costume and punches bad guys because it seems like fun.” In contrast, the Turtles “became what [they] needed to become to survive.” This is honestly a really good point, and Batman reacts not with defensiveness but by giving Raph some insight into his motivation for going out and punching bad guys, by taking him to Crime Alley and explaining his origin story, the death of his parents, and that he does what he does to prevent the same thing happening to another family.

This is writer James Tynion IV absolutely nailing this crossover. Batman uses his privilege to fight crime while the Turtles fight because of (but also despite) the detriment of their absolute alterity; what unites them, though, is precisely their shared conviction of the importance of family. Batman lost his, only to build a whole new one including his butler (who’s really more like an adoptive father), sidekicks (really more like adoptive children – in one case literally his adopted child and in another his actual biological son), and others; unlike, say, Spider-Man, who’s often portrayed as going out of his way to protect his loved ones by isolating himself, Batman surrounds himself with others who share his values (and frequently his tactics), for whom he would lay down his life and who would do the same for him. Similarly, the Turtles fight as a family for their family, and nothing is more important to them than each other.

With every issue, I trust this guy Tynion more and more. I’m really enjoying the hell out of Batman / Teenage Mutant Ninja Turtles.

Where to Start: Batman / Teenage Mutant Ninja Turtles #1  Time investment: 3 issues
Recommended if you like this: Batman: Bruce Wayne – Fugitive 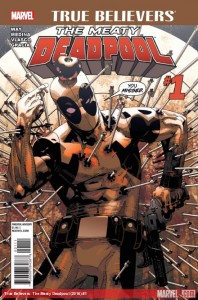 This week Marvel reprinted nine classic Deadpool comics (plus one issue full of variant covers) – and I love you guys, you readers out there, I really do, but not so much that I’m going to review each and every one of those comics for you (maybe if you put out once in a while…). What I will do, though, is review them all as if they were one long and very confusing comic spanning decades and including almost exclusively the middles of stories with no beginnings or ends. Fun!

One thing that strikes me about these comics is that Deadpool was funny right from the start. Deadpool is first introduced as an assassin hired by the mysterious Mr. Tolliver to kill Cable, cybernetic son of Scott Summers and Jean Grey from a possible dystopian future.  At a moment, the early 1990s, when superhero comics were deep in the XTREMEZXZX!! serious-and-gritty movement, we first meet Deadpool with the words, “You’re Nathan, right? I’m Deadpool. Pleased to meet you.” During the ensuing battle, when he’s attacked from behind by New Mutant Cannonball, he grants that Cannonball caught him by surprise – “I hate when that happens.” Cable subsequently lands a pair of punches to Deadpool’s face with the words, “You talk too much,” to which Deadpool replies, “Ow. Hmmm… Maybe I do. Think you broke my jaw, Nathan. I hate when that happens, too!!” Writer Fabien Nicieza seems to have had a pretty clear vision of this character from the very beginning, and you can see how he might evolve into the serious (and seriously popular) weirdo he became.

The other thing that struck me about the first appearance of Deadpool is that I forgot how terrible an artist Rob Liefeld was. I mean, I’m not a doctor or anything, but I’m pretty sure that humans do not have octocep muscles.

Deadpool and Cable ended up being pretty tight (I guess you can have a second chance to make a first impression); the voices in his head (and in the comics’ captions) kept on multiplying; and he gets laid more often than you’d expect for a guy who looks like he stuck his head in a microwave that already had a couple of black puddings inside.

He also hung out once with the Heroes For Hire back in the ‘70s (or at least he thinks he did). That issue, where he joined Luke Cage (a.k.a. Power Man) and Danny Rand (a.k.a. Iron Fist) go after a mob bass called The White Man (the seventies were weird), really made me nostalgic for the comics of my youth. The whole book is done as a pastiche of Bronze Age comics, with their beginnings of socially conscious but also bizarre and supernatural subject matter, their attempts at a more mature and “realistic” art style offset by the low-quality paper stock and four-colour printing with its characteristic Ben-Day dots. It makes me wonder why there aren’t more Bronze Age comics being produced today. The practical limitations of the past become the stylistic choices of the present, and I for one would absolutely go for some superheroes that obey the visual and narrative codes of the 1970s and 80s. Deadpool fits into that mileu surprisingly well (his affection for the third Iron Man movie notwithstanding), but then I guess that’s the thing about Deadpool, right? Because he’s always a little bit outside of reality he has the kind of versatility that not a lot of other characters have – which is why he can get away with a musical issue of a comic book just as easily as a hard-boiled detective story set on an island made of pieces of an orbital station from the future.

Where to Start: Deadpool Classic Volume 1 Time Investment: Dude, who even knows. Like a million? One million times.
Recommended if you like this: 7 of the Best Chimichanga Recipes You Can Make at Home