Writing a well rounded character is a lot like measuring the coast of Britain, or at least, that’s what Pixar’s Inside Out seems to be telling us. Inside Out depicts a world where people are literally ruled by their emotions, as depicted by five color coded avatars operating a control board just behind the eyes of their human (or animal) hosts. Yellow for Joy, blue for Sadness, red for Anger, purple for Fear and green for Disgust. In particular, we follow the antics as the emotions inside eleven year old Riley struggle to help her navigate the trauma of uprooting her life in Minnesota and moving to San Francisco. As you would expect, the avatar for each emotion comes across as an over the top caricature with Anger (Lewis Black) predisposed to flaming fits of rage and Fear (Bill Hader) acting as a constant worry wart. The interesting thing is that, while Joy (Amy Poehler) brings a relentless upbeat optimism to the emotional team, Joy also experiences fear, anger, disgust, and ultimately sadness as the film progresses. And this brings us to Benoit Mandelbrot. 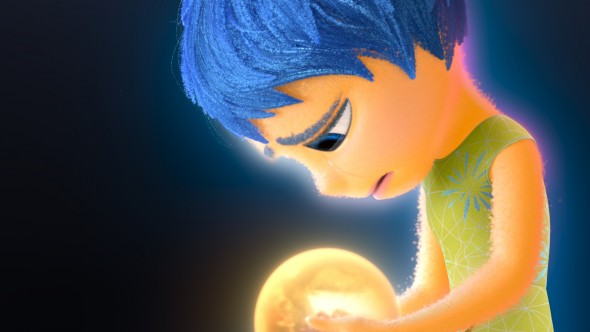 Aw man, is this gonna make me learn stuff?

In 1967, Mandelbrot published a paper entitled “How long is the coast of Britain? Statistical Self-Similarity and Fractional Dimension”, which tackled the seemingly paradoxical fact that the length of the British coastline depends on the length of the measuring stick used. To see exactly how confounding this was, imagine trying to use sticks to measure the circumference of a circle. The Method of Exhaustion allows for better and better approximations to be found by inscribing (drawing inside, with the corners touching the perimeter of the circle) and circumscribing (drawing outside, with the sides tangent to the perimeter of the circle) polygons with greater and greater number of sides. As can be seen below, the basics are the same:  smaller and smaller measuring sticks. For a circle of diameter 1, this method converges slowly — a 96 sided polygon only gives two decimal places of accuracy — but inexorably to π.

However, when the same technique is applied to finding the perimeter of Britain, somehow the answer never converges. It just keeps getting bigger forever. Where does this extra coastline come from? The devil, as it were, is literally in the detail.

You see, each time the measuring stick shrinks, more features crop up. New bays, coves, spits, estuaries, etc., that weren’t accounted for at coarser scales suddenly have to be added in. The smooth edge of a circle didn’t present us with this problem… but Britain doesn’t have smooth edges, not at any level. Shrink the stick again, and you have to add the fine detail of beaches and rocky cliffs, and individual grains of sand, and so on, until eventually you are measuring a near infinite coastline on an atomic scale. Which brings us back to pre-teen girls.

From a distance it appears that Riley shifts between the five emotions taking turns at the control panel in her mind. But, delving deeper shows that her core emotions all have emotional states of their own. And, if Joy has five even smaller emotion avatars controlling her (as this would surely imply), it seems reasonable to think that it’s tiny anthropomorphic personifications all the way down. (Yeah, yeah, the Homunculus Argument is widely discredited, I know. But this is the Five Homunculi Argument. ‘S totally different. Also:  let’s all start claiming that Riley’s name is supposed to be a reference to Gilbert Ryle.“) 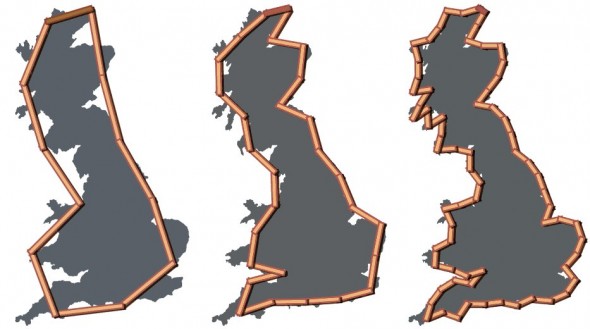 The border of Colorado doesn’t have this problem.

So how can we understand what’s going on in Riley’s head? Well, Mandelbrot dealt with the coastline paradox by introducing the concept of fractional dimensions, i.e., the coast of Britain can’t be measured because it’s not a one dimensional feature. Mathematicians love to extend concepts. If a line lives in one dimension and a square lives in two dimensions, then what kind of object lives on 1.5 dimensions? To answer such a question requires a concrete definition of dimension. In one dimension you measure things with sticks, and every time you halve the length of your stick, you require 2 (2^1) times as many sticks. In two dimensions you measure area by covering the object with squares and every time you halve the length of the square’s sides you need 4 (2^2) times as many squares. So by extension, in 1.5 dimensions, every time you halve the length of your 1.5 dimensional measuring unit you need 2^1.5 times as many units to get the job done. Or if a clean halving can’t be accommodated, let 1/S be the scaling on the measuring unit (so for a stick that’s half as long, S=2) and M the multiplier for the increase in measuring units needed (for twice as many sticks, M=2). The dimension is then given by:

Since that’s a lot to take in, let’s look at an example that models the Inside Out universe. We start with a line representing Riley. 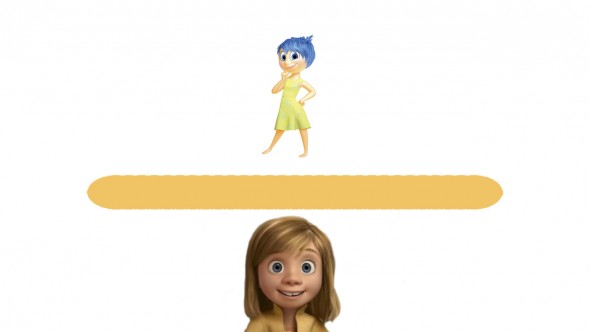 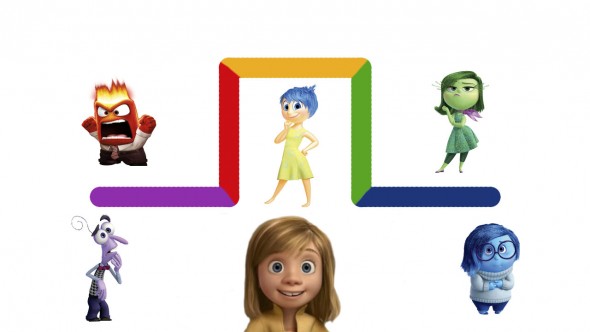 But remember, each emotion has its own internal life. So they each get broken into 5 more nuanced emotions. 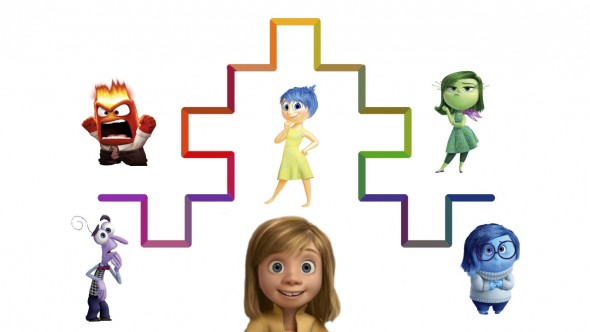 Just like with the coast of England, “what’s going on with Riley” depends on how we measure. If we use a single Riley sized stick, her range of emotions (for lack of a better term) has a length of 1. But, if we measure with a stick that’s one third of that length, the extra detail in diagram two comes into play. We could plug this into an equation, of course, but there’s no need:   5 sticks at ⅓ per stick gives her a range of emotions of 1.6̅. By the fourth level of detail, her emotional range has an approximate length of 4.6. Each time the stick gets ⅓ as long, 5 times as many sticks are needed to capture the added detail. Instead of a simple one dimensional character, Riley’s emotions exist in a 1.46 dimensional space! (But I’m sure we already suspected that pre-teen girls are infinitely complex.)

How does this play out in the film? Let’s take the early scene where Riley’s mom and dad start arguing, and Riley has the idea — or rather, Joy has the idea of Riley having the idea — to distract them with a game of trashcan hockey. Joy in turn seems to be motivated by something other than joy:  her own sense of fear. Which means that the emotional experience of the hockey game is located precisely… 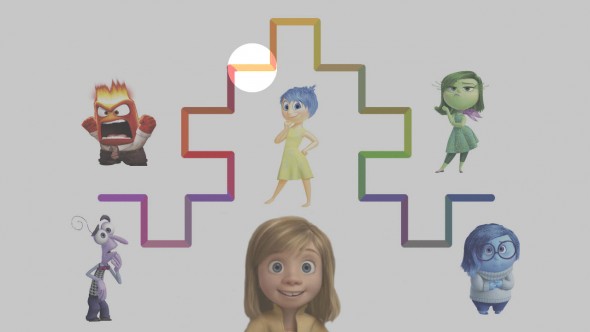 But the point isn’t to try to locate every emotional beat at its precise location on a curve of ever-increasing complexity. (Was that fearfully joyful joy? Joyfully fearful joy?) The point is that fractally nested emotions will turn out to be remarkably nuanced. We can easily imagine a version of that scene where Riley is acting out of unadulterated joy or fear; it’s not an improvement.

Beyond just Riley, this framework opens up new ways to think about writing nuanced characters in general. The language of dimensions has long been a part of discussing character development. Characters can be “flat” and one-dimensional or three-dimensional with “depth”. When a character is fleshed out, this shows us a new “side” to them. However, generally this metaphor is related to discrete dimensions, which lends itself to the kind of character development accomplished by adding backstory or motivations, or by putting the character in situations where they behave differently. For example, when Riley’s dad gets the phone call about an impromptu investor meeting, this moves him from beyond just being Riley’s father to having a host of problems of his own. He goes from one-dimensional to three-dimensional because we get to look at him from another angle.

In Inside Out, Pixar illustrates how this dimensional metaphor extends to a more inward-facing version of characterization. There are two key features from fractional geometry that carry over to writing: layering and self-similarity. Like the multiple levels of detail found on the British coastline, layering occurs when different features arise at different scales of observation. When someone says a scene “works on so many levels”, that’s layering. This can be seen in the opening scenes of Inside Out. On one level, Joy’s giving the stage setting exposition that shows us Riley as a generally happy kid. However, Joy’s manner of narration has her acting like Riley’s PR department: Riley’s happiness is the product of carefully keeping her other emotions in check, which sets up the central conflict of the film. And beyond even this, there’s subtle foreshadowing of the ending in the way the machinery in Riley’s mind keeps expanding. Happy kid? Unhealthy fixation on happiness? Hints of future complexity? It depends where you look. And that’s layering. 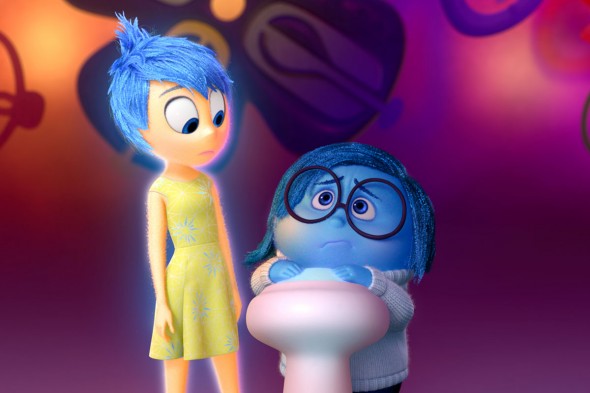 The second feature, self-similarity, occurs when common patterns occur at multiple levels. (Note: self-similarity is a kind of layering, but not the other way around). Mathematically, this occurs when a structure is made up of smaller versions of itself. The Koch curve gives a basic example of this, as does the simple model of Riley’s emotions that we constructed above (which is itself just a variation on the Koch curve). In a film/literary setting, this could be explicit, like a play within a play, or implicit, like costuming and mannerisms that reflect personality. (Or, if you’re a long time fan of Overthinking It, the “Downton Abbey Moment” would be a good example.) For Inside Out this is especially explicit, as Riley’s emotions give voice to her internal thoughts and  feelings. The anxiety that Anger, Disgust (Mindy Kaling) and Fear feel, while trying to cope without Joy, mirrors and reinforces the anxiety Riley feels from being thrust into a strange new city and life. Another prime example of self-similarity crops up when we’re given a glimpse of the emotion control rooms inside Riley’s parents. Instead of Joy, the dominant emotions in Riley’s mother and father are sadness and anger respectively. In this way, Riley’s family operates in a similar manner to the family of anthropomorphic personifications in her mind, with each individual representing a different emotion. Just as Joy works to keep Riley happy by micro-managing Fear, Disgust, Anger, and especially Sadness, Riley works to keep her family unit joyful by interjecting games of hockey and trips to the pizza parlor. And, in the other direction, Joy struggles to maintain her own upbeat attitude as her circumstances spiral into chaos. 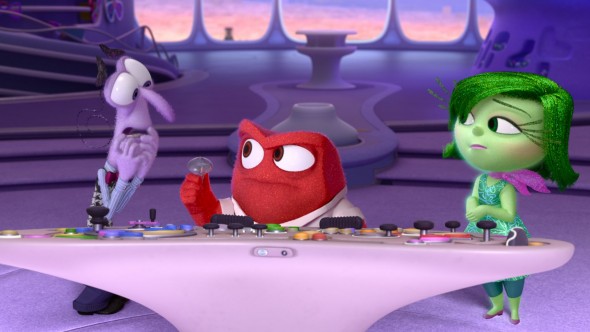 I’ve got the physical manifestation of an idea.

Ultimately, the movie shows us the importance of nuance. In the final moral of the story, it’s not only important to embrace sadness as a healthy emotion, but to recognize the complex embedding of emotions. The little yellow Joy memory orbs weren’t being newly infected by blue Sadness (Phyllis Smith), the sadness had always been there. For Riley, coming of age means coming to terms with the complexity of her own internal workings and learning how her emotions affect her actions. (At least a little. Twelve-year-olds don’t have it all figured out, no matter well animated their epiphanies.) It’s no surprise then, that writing well developed characters ties neatly into a story about developing into an adult. In this way, one sign of a well written character is that they reward and encourage Overthinking. 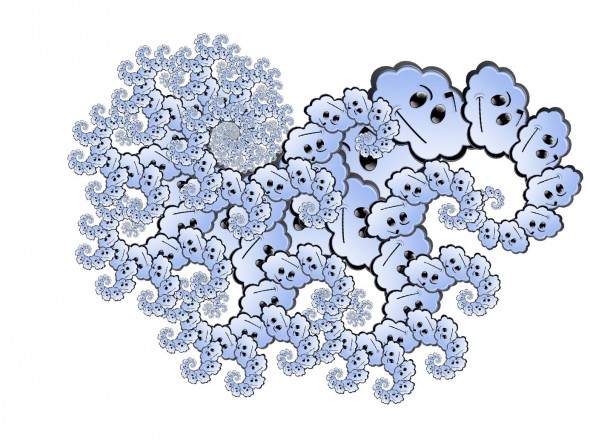 Or read more from… Featured, Movies, characterization, fractals, Inside Out, math, pixar

6 Comments on “Fractal Characterization in Inside Out”