With the new Deadpool movie coming out, you’re going to want to know as much as you can about the Merc With A Mouth before heading to the theatre (or illegal pirate torrent site if you are a terrible, terrible person). So Overthinking It officially presents Deadpool 101, your guide to this weird Spider-Man-looking guy who’s suddenly all over everything.

The first thing you need to know about Deadpool is that he’s a joke. He was originally created by ubiquitous 1990s superhero artist Rob Liefeld, who is also a joke (maybe “originally” should be in quotes back there, because Rob Liefeld is famous in the comics world for two things: thinly-veiled plagiarism and a kind of staggering ignorance of human anatomy). 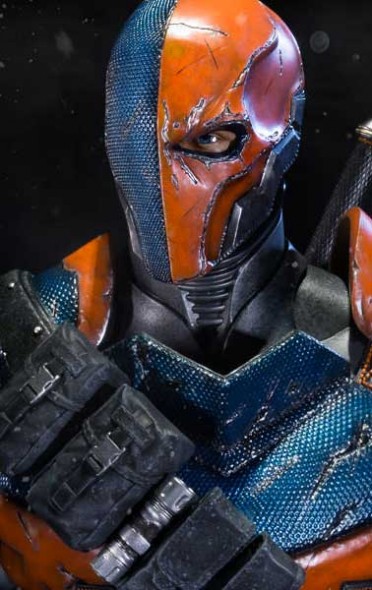 Not Deadpool, but we can see how you’d make that mistake.

As the story goes, Liefeld sent this drawing of a “new character” to writer Fabian Nicieza, who responded that it was nothing but a copy of the DC character Deathstroke. So Nicieza dubbed the character “Deadpool,” because, logically, a deadpool is where you’d be most likely to find people doing the deathstroke.

Much like DC’s character Lobo, Deadpool quickly became a parody of the kind of ultraviolent antiheroes popular at the time, like Wolverine and the Punisher. Also like Lobo, Deadpool became superpopular among irony-blind comics readers, making him (as far as I can tell) the only new non-Turtle superhero to gain mainstream recognition for Stan knows how long. Seriously, if you can think of another superhero that was introduced since Deadpool in 1993 and would be recognizable to your average non-nerd person on the street, I want to hear about them). (Editor’s Note: I was going to “well actually” with Harley Quinn, but she was apparently 1992.) [How dare you! I could never forget about my Harley. -RR] 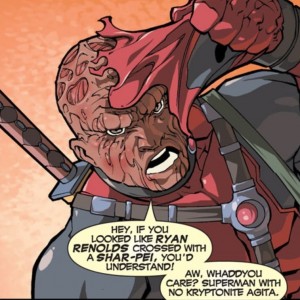 Wade Wilson (a play, again, on Deathstroke’s civilian identity, Slade Wilson) was a test subject of the Canadian government’s Weapon-X program (THANKS TRUDEAU), the same super-soldier program that gave Wolverine his adamantium skeleton. Unlike Wolverine, whose healing factor is a natural part of his mutation, Deadpool’s incredibly fast healing was part of the Weapon-X program’s experiments; at the time of his involvement with Weapon-X, Wilson was suffering from cancer, and while his healing factor does almost-instantly regenerate his cells so that not only the cancer but practically nothing else can kill him, the cancer cells themselves are also constantly regenerating, meaning that Deadpool is riddled with tumors inside and out – he doesn’t remove his costume too often. 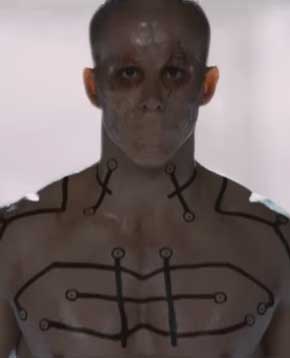 Deadpool belongs to the 20th Century Fox Marvel cinematic universe, which currently includes the X-Men and all mutant-identified characters, plus the Fantastic Four, but not any of the Avengers-affiliated characters or Spider-Man. So while Deadpool’s connection to Wolverine has already been established in X-Men Origins: Wolverine, the rest of his complicated relationships, like his extremely unrequited megacrush on Spider-Man, are doomed to be left out.

X-Men Origins: Wolverine so badly botched Deadpool’s character (as well as, you know, everything else about the movie) that it’s almost miraculous we’re getting a Deadpool movie that seems it’ll be true to its source material. That movie made Deadpool a mutant (he’s not), who fought alongside Wolverine in Vietnam, and who was later turned into an unstoppable killing machine by the Weapon XI Project (that’s XI, which is one more than X – even in the comics, the X in Weapon-X was retconned into a Roman numeral ten by, who else, Grant Morrison) through a process that infused him with DNA from as many other mutants as they could find, so this Deadpool could teleport and shoot optic blasts and some other stuff. The Merc with a Mouth became the Merc With Literally No Mouth, excising Deadpool’s most notable characteristic – his bizarre humour – and turning him into nothing more than a boring guy who’s good at killing people. Deadpool is a lot of things, but he isn’t boring.

Deadpool actually has a rich history of getting butchered (figuratively, but literally too) in Wolverine Origin stories; he appeared in the comic series Wolverine: Origins as a mercenary hired to kill Wolverine, but he was so out of character in that series, although in the opposite direction of how out of character he was in the Origins: Wolverine movie. Instead of a humourless mutant stitchy-face, he was basically written as a homicidal version of GIR from Invader Zim. At least he looked like Deadpool.

Obviously something will have to have changed if the Deadpool movie is meant to be canon with the rest of Fox’s Marvel properties. Was the old Deadpool just as wacky as this one, except we didn’t know about it because his mouth was melted shut? Is that why his mouth was melted closed? Or was it Wolverine’s time-travelling in Days of Future Past that retconned that Deadpool into this Deadpool, along with seemingly having fixed lots of the other dumb bullcrap that the more lackluster X-Men affiliated movies foisted on us? Is there any diegetic explanation for Deadpool’s radical reformation at all?

In any case, don’t be surprised if you hear Deadpool remarking on that very fact in the movie, because perhaps the most important thing to know about Deadpool is he knows that he is a fictional character. In the comics, he is completely aware that he is in a comic, that he’s a comic book superhero and none of the other people around him are real either – and he has a lot of fun with that knowledge. It’s been speculated[By who?] that this fourth-wall awareness is directly related to his flagrant disregard for human life: why worry about killing people if they’re not even really real? 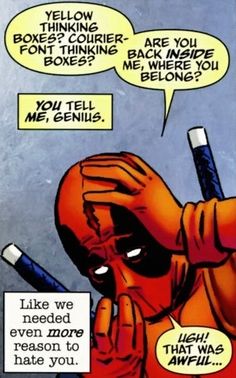 He can probably see this too.

Deadpool is so aware of the fourth wall that he can even see the narrative captions that accompany the panels in his comic, and he not infrequently engages in back-and-forth with them. He has information about the world that he shouldn’t have and that nobody else in the Marvel Universe has, and he’s generally the kind of funny and violent and meta character that people just go nuts for – which is why you’ll find him on the cover of every freaking Marvel book out there. Like a latter-day Wolverine, Deadpool is so popular as to be ubiquitous; in the 90s it was Wolverine’s turn to be a member of every team plus multiple solo books plus guest spots in seemingly every other book, and now that Wolverine is dead (survived by his gender-swapped clone and an old-guy version of himself from a parallel universe and also the future), Deadpool is the real new Wolverine, at least in terms of marketing. And boy does he know how to market himself. So one thing we can expect is for movie-Deadpool to speak directly to the camera, Zack Morris-style, and that’s something totally new in the Marvel superhero movies. It brings a whole new dimension of awareness to the X-Men’s cinematic context, at least, and the way that it plays is likely to affect the reception of future X-Men movies – and maybe future Fantastic Four movies if Fox insists on continuing to reboot that unsalvageable franchise. 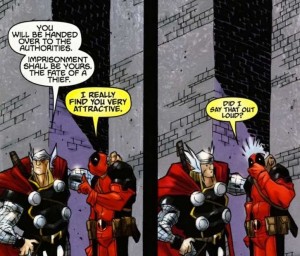 His bizarre outlook and ability to violate the established rules of the world are the major sources of the character’s comedy – and oh, is he funny. Deadpool is able to do things that other Marvel characters can’t do. He can interact with other citizens of the Marvel Universe in ways that deconstruct them. He can be omnisexual in a way that’s comedic rather than threatening – one running joke is his infatuation with Spider-Man, but he’s also been shown as being super into Thor, and having a romantic relationship with Thanos’s ex, Death. Yes, that Death. 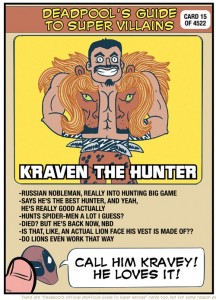 He can ironically comment on in-universe events that shouldn’t be knowable to other characters, as well as on stuff that shouldn’t be knowable because they’re part of our level of reality rather than his. Which is how he has his own “Deadpool’s Guide to Supervillains” trading cards – Squirrel Girl, one-time teammate with Deadpool on the Great Lakes Avengers, seems to have the only complete set of these cards, which she uses to get the inside scoop on foes in several issues of her own ongoing series.

Dude also loooooves him some chimichangas. 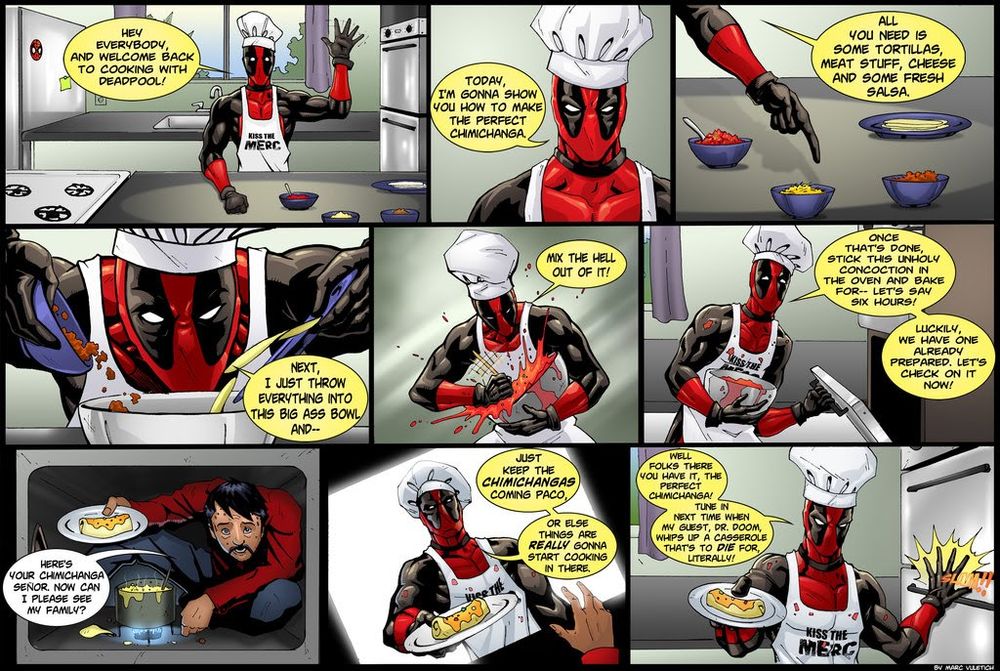 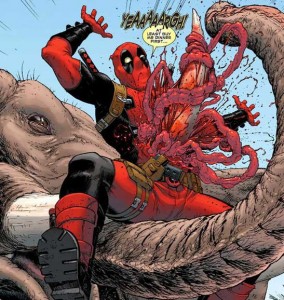 What series of events could have possibly led to this?

In addition to the humour and the fun violence, the third major factor that makes the Deadpool movie unique in a crowded superheroic movie landscape is its R-rating. It isn’t the first R-rated comic book movie, of course, not the first R-rated superhero movie or even the first R-rated Marvel superhero movie – but it is the first one deliberately designed to be part of an ongoing cinematic universe with the talent, the budget, and the marketing to have an effect on the way superhero movies are done in the future. When Watchmen performed more poorly than expected, too many people considered it the death knell for R-rated superhero movies – besides the fact that Watchmen really wasn’t as bad as everyone said it was, that attitude also showed that people had somehow forgotten all about Blade, which really was the movie that kicked off the current crop of superhero films even more than that first Spider-Man did. That said, Hollywood is notoriously risk-averse, and so it wasn’t until Deadpool that they felt they had a character so popular, associated with a larger universe (the X-Men in particular, but also the whole Marvel Universe in general, which although it’s legally separate, will never be completely separable from the Avengers and associates in audience’s minds) that the risk seemed either negligible or worth it from the perspective of Fox’s pocketbooks. 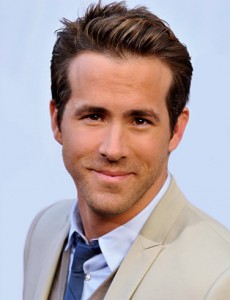 The one reason I can think of not to go see this movie is that Ryan Reynolds really bugs me and I’m not sure why. His face just makes me angry. I think it might be the eyebrows. But since he’s going to have that mask on for probably almost the entire movie, this objection is easy to dismiss.

The moral of the story: go see Deadpool, and then report back to us right here!