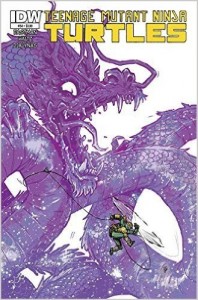 Things get muddled, morally speaking, and we begin to see exactly where the battle lines are going to be drawn. With Splinter the new leader of the Foot Clan, and Michelangelo tentatively joining (or at least hanging out with) the Mutanimals in protest, what we all knew was too good to be true turns out to be: old enemy Old Hob, leader of the Mutanimals, isn’t disposing of the weapons and technology they take from the city’s various gangs and other bad guys, but stockpiling what they need and selling the rest to Hun, leader of the Purple Dragons street gang and Casey Jones’s estranged father. This discovery leads to a Mikey-versus-Hun brawl, but also to an argument about what the right thing is to do and why, that rends the fledgling Mutanimals into pragmatist and idealist factions.

Look at this from Mikey’s perspective: he’s just seen Splinter execute Shredder and take over the deadliest criminal gang in New York; sure, the intent is to reform it into a force for good, but we’ve already seen some pushback from Foot members who are certainly going to turn out to be Shredder loyalists. So he goes to hang out with his buddies, he gives Old Hob the benefit of the doubt, but it turns out that he hasn’t changed at all, or if he has, it’s just that now he thinks it’s okay to do shady stuff if it’s in the name of something good – in particular, defending mutantkind from its enemies.

This issue really lays out what’s sure to be a theme in the next big chunk of the TMNT title, which is how to make tough decisions when circumstances change, and generally to what extent can the ends justify the means? Plus, how much faith is it safe to put in your own good intentions when the stakes are high?

Some of the dialogue is a bit awkward – Slash’s “I never intended to oversimplify the world we live in” is a notable example – and I don’t quite care about many of the new characters that have been thrown at us over the last several issues (Man Ray and Sally in particular are kind of ciphers), but it feels like we’re starting to get somewhere after taking a short breather following the tremendous Issue #50. 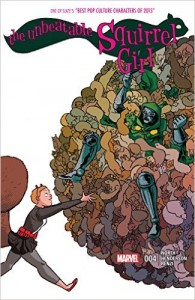 Still trapped in 1962, Squirrel Girl and most of her second-year Computer Science class must now come up with a plan to defeat Doctor Doom from the future – but not all the way in the future, just immediately following his first meet-and-defeat by Squirrel Girl, where she began to earn her reputation for unbeatability.

Or must they? The cool thing about times machines is that you can use them to travel through time! Meaning that if Squirrel Girl and crew can get their hands on Doom’s time machine, they can pretty much do whatever they want.Getting the time machine, though, that’s going to be the tricky part.

Here’s the coolest bit: Squirrel Girl is primarily a comedy book, but the ways that Doreen defeats her dramatically overpowered opponents are never jokes; they’re funny but plausible, and she relies on straight-up punching a lot less often than most other superheroes do. The first time she fought Doctor Doom, she flung a bunch of angry squirrels at him, but that’s not going to work this time (she’s not friends with any of the squirrels from 1962 so they won’t just do whatever she tells them like contemporary squirrels). And yet she’s determined to find common ground with Doom (at least she is after he discovers her trying to steal his time machine) and end this peacefully with everybody walking away happy like she did with Kraven and Galactus (yes, that Galactus).

Squirrel Girl can punch real good when she needs to, but she’s also invested in actually solving problems, so if there’s some way for the bad guys to get what they want without wreaking their characteristic havoc on everybody else, she’s going to try to find that thing and suggest it to them. But what if you’re dealing with a narcissistic megalomaniac who seriously just wants to take over the world? How do you give him what he wants without just, like, letting him take over the world, which is what everybody else doesn’t want? How do you compromise with somebody who thinks that “compromise is for the weak”?

All these issues come up in this, uh, issue, along with Doctor Doom shouting out Abraham Maslow and dealing a sick burn to Henry F. Phillips in the middle of a fight. How do you beat a guy like that? I have a feeling we’ll find out next time…

Where to Start: Unbeatable Squirrel Girl #1 Time commitment: 3 issues
Recommended if you like this: Lumberjanes Volume 1 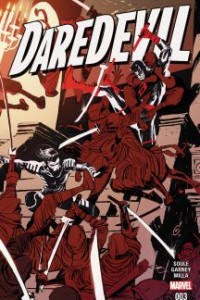 The two best Marvel books in the same week! We are so lucky.

At the Church of the Sheltering Hands, demon-worshipping ninja clan The Hand show up to take back the power that Tenfingers – evidently, we learn, a former Hand member himself – stole from them. Rather than let them fight it out, Daredevil gets involved to protect the duped-but-otherwise-innocent members of Tenfingers’ cult. The Hand eventually withdraw, but that only means that Tenfingers and his cult are still fully operational – meanwhile, Matt’s failure to prevent the city’s only witness willing to testify against Tenfingers from being coerced into recanting his testimony ends up getting him demoted from assistant D.A. to ECAB.

As Matt himself acknowledges, he “gave up everything for a new beginning” – and we’re still not sure what that “giving up everything” really entailed – and he’s already screwing it up, making decisions that may even be the right ones but are turning out to make things worse instead of better. That’s kind of always been Daredevil’s deal: doing the right thing even when doing the wrong thing might actually be an improvement. It’s only when he makes the wrong choice, when he takes the road of pragmatism over idealism, that things end up turning truly sour (the whole Shadowland imbroglio comes to mind).

The illegal immigrant issue momentarily surfaces when Daredevil directs his apprentice Blindspot to seek out the Night Nurse to tend to his injuries, since as an illegal he can’t even get insurance, and hasn’t got an extra twenty grand lying around for an ER visit. This new volume has been paced terrifically thus far, but how long will it be before it’s really crunch time for Matt’s morality, and when will we learn about what really happened to get him readmitted to the bar in New York and also back behind his previously exposed secret identity?

Where to start: Daredevil #1  Time investment: 2 issues
Recommended if you like this: Daredevil: Shadowland 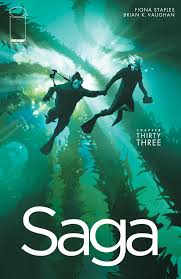 At last we get to see what’s been going on with Upsher and Doff (not Doff and Upsher – writer gets first byline), the professional-and-romantic journalist duo who were investigating Alana and Marko’s whole deal before The Brand put a curse on them preventing them from telling anyone what they know about the case. As soon as Upsher learns that The Brand is dead (from an honest-to-Glob newspaper made from the tree corpses or maybe rocketships?) and hence the curse is lifted, it’s right back to investigating what ever happened to those two crazy kids.

And a lot like Michelangelo with the Mutanimals, we get a bunch of discussions of morality and unlikely allies coming together here. Upsher is certain that the right thing to do is keep digging until the end, whereas Doff isn’t sure if this single event from years ago is even newsworthy. Beyond that, while Upsher seems to be at least a little bit squicked by the idea of a Landfallian getting moony fever and producing a child, Doff wonders whether Marko and Alana are so different from him and Upsher, a same-sex couple from a “backward planet [that] still hate[s] the homos,” as Upsher describes it. Upsher ends up coming off as kind of suprisingly closed-minded here, which is something I’m sure will be delved into deeper in future issues, but by the end of Chapter 33 we’ve been introduced to the all-new, all-different character configurations that seem to be whom this volume of the book will focus on: Alana and Marko, of course, but also Klara, Hazel, and Izabel; Ghüs, Prince Robot IV – uh, I mean Sir Robot IV – and his goose-hunting son, Squire; and now, Upsher, Doff, and…The Will and Sweet Boy!

Bizarre and unexpected alliances between people who ought to have in common in what Saga is all about, and every volume seems to play mix-and-match with increasing weirdness precisely in order to set up these internally conflicted coalitions and pit them against each other. That’s the most interesting thing about every group of people in Saga: to some extent, none of them really seem to naturally belong together, and they always inevitably end up fracturing and then reforming in some different way. As Spock might say, it’s a case of infinite diversity in infinite combinations, and if Saga’s cast is anything, it’s diverse: witness the conversation between Upsher and Doff and Ginny, the Gardenian dance instructor with whom Marko became close – we’ve got a blue guy, a green guy, and a purple lady all hanging out around a trampoline. In fact, there’s nobody in the issue with a human skin tone at all until page 18 of this 22-page comic, and yet it’s something you barely notice until you take the time to sit back and think about it. Which is kind of neat, you know?

Where to start: Saga #1  Time commitment: 32 issues
Recommended if you like this: Swamp Thing Volume 1