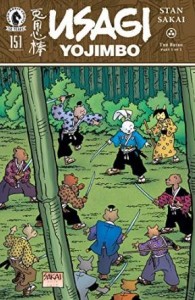 There’s something to be said for straightforward storytelling. Stan Sakai rarely tries to tell elaborate or narratively complicated stories in Usagi Yojimbo, and mostly when there’s a mystery at the heart of an issue it’s not too hard to guess the solution. And yet somehow it never gets dull. Even when it’s predictable it’s entertaining, and although a lot of Sakai’s storytelling technique is obvious and lives largely on its surface, it’s almost always both charming and exciting. A lot of this probably has to do with the relative simplicity of Sakai’s character design combined with the painstaking detail he puts into the backgrounds – the architecture and natural scenes embed you in this world of talking animals and this one samurai rabbit in particular and you’re completely willing to go along with it, whereas a less talented creator than Sakai wouldn’t be able to do nearly as much with so little.

This issue made me think about these things because it’s really that kind of story: Usagi comes upon a procession of merchants that’s been massacred, seemingly by bandits, from the porters even up to the samurai escort. Usagi, of course, investigates, and, of course, discovers the lone survivor – a woman on her way to her arranged marriage to the son of a brewer in a nearby town.

It’s well-established that only a handful of swordsmen and swordswomen are a match for Usagi – more often than not, his opponents mistake his innocent appearance and kind manners for weakness and don’t live long enough to regret their error. We know that we’ll get a well-choreographed fight scene or two (has there ever been an issue of Usagi without a swordfight?), so it’s getting to know the strangers that Usagi meets in his travels and learning more about the workings of this funny animal version of Late-Sixteenth Century Japan that keeps us invested.
This time it’s the politics of arranged marriage, the conflict between love and duty, or the surprising (from our cultural perspective) lack of such a conflict. And what we learn from dialogue is sometimes reinforced and sometimes contradicted by what we see through action, deepening the complexity of the world yet further even as the story moves cleanly from A to B to C. It’s halfway between a fable and a modern, sophisticated indie comic narrative, variations on a classic theme, and it’s just good every single month.

One Comment on “The Rabbit Samurai and the Reluctant Bride”