Week 19 of our comics reading list comes just as 2015 transitions to 2016. This week’s haul includes the most recent issues from Fight Club 2, Teenage Mutant Ninja Turtles, Saga, Daredevil, and the Dark Knight III.

Have a New Years resolution to read more comics? If so, this week’s set has a number of great places to start (and a few to probably avoid). 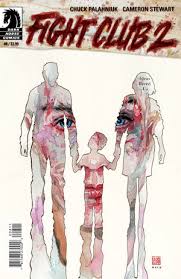 Chuck Palahniuk is in this issue. Not for the first time – he was in issue 3 or 4 or something – but here he is again. I am in no way against metafiction, but I don’t think this is the right place for it. We open on a house where Chuck is sitting with his writing group, workshopping this very comic. One of the members of his group says, “Let’s get this straight…Tyler is some infectious mental virus? Then how can you resolve him?” To which Chuck reacts by wumping his head down on the table and admitting, “I can’t. Try removing Santa Claus from the cultural landscape.”

This happens right before Chloe (remember Chloe from Fight Club? From the cancer sufferers support group? Yeah, she didn’t die, she’s just been impersonating an eight-year-old with progeria all this time) calls him on the phone. To ask for plot advice. Again, let me emphasize that I like metafiction. I like the revelation that Tyler isn’t actually a product of the protagonist’s mind but a congenital meme intent on destroying civilization. It’s a smart metaphor for what Tyler Durden and Fight Club have become within the popular culture since the movie based on Palahniuk’s novel came out.

But not like this. This just isn’t working. For me, this just isn’t working. I don’t know exactly what it is that should be different, but…something. “Senseless” isn’t the right word, but it’s the first word that comes to mind. Sorry, Chuck. I will still buy everything you write. Make Something Up was fantastic.

Where to Start: Fight Club 2 #1 Time commitment: 7 issues
Recommended if you like this: Yeah, Make Something Up: Stories You Can’t Unread 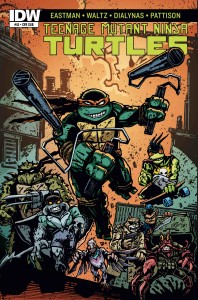 Michelangelo is contemplating joining up with the Mighty Mutanimals over Splinter’s decision to take over control of the Foot Clan, but he’s conflicted, still believing that his family are good guys, and having very little trust of Mutanimals’ leader and ostenstibly reformed villain Old Hob.

Also, Casey and April are having relationship problems, and feel like talking about them, which always makes for a super interesting superhero comic.

Overall we’re still in a lull period, a time of reconfiguration, after the world-shifting events of Issue 50. But I think it’s about time for something to happen. The last page and the preview of next month’s cover make it look like that’s exactly the plan, so check back in then! 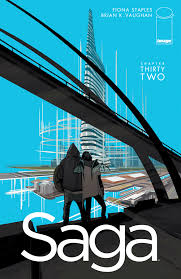 What have Alana and Marko been doing while Hazel and Klara have been incarcerated as enemy non-combatants? Not having sex, that’s for sure! Evidently in the interest of not accidentally creating any new adorable little halfbreed abominations until they locate their first one, they’ve been keeping it PG for the last little while – until they learn, thanks to a daring nighttime raid to acquire the manifest that proves their daughter is alive and reveals where she is, at which point we get the full-frontal splash page that we’ve all been dreaming about.

Also Marko has doubled down on the pacifism (can’t wait to see under what circumstances he breaks that vow again), and has grown a terrible beard. It’s a funny issue and some stuff happens (although not much) but the real weird thing is seeing Prince Robot IV – make that Sir Robot – dressed up like Robin Hood and with his swan-shooting son, the pretty-big-already Squire!

These last two issues have mostly been catching up with what our characters have been doing in the intervening time since the end of the last chapter, and now that we know, I’m expecting things to start running just as smoothly as ever very soon…at this point we’re just waiting for the family to be reunited, but once that inevitably happens – then what?

Where to Start: Saga Deluxe Edition Volume 1 Time Commitment: 31 issues
Recommended if you like this: The Private Eye 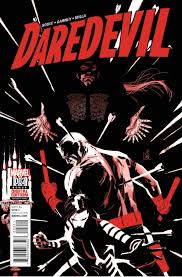 Matt Murdock is settling into his new job as New York Assistant District Attorney, although we still don’t know the precise circumstances under which he was readmitted to the bar and got the job haven’t been revealed yet, besides that it was due to “pressure from the mayor’s office.” More about that will be revealed in time, I’m sure, but for the moment Murdock’s main concern is the rising power of a mysterius figure called Tenfingers and his Chinatown-based Church of the Sheltering Hands. This organization is gaining popularity particularly with New York City’s Chinese illegal immigrant community, but while Tenfingers seeks legitimacy by applying for federal recognition of his church, he’s also taking control of street gangs and using them to do his (very illegal) bidding. Murdock is determined to fight him both in the courts and behind the mask as Daredevil.

There’s a witness named Billy Li who’s willing to testify against Tenfingers; at the same time, Daredevil comes to believe that Tenfingers’ powers – what he uses to perform “miracles” for his most devoted followers – isn’t his own, and is more dangerous than even the cult leader himself realizes. That trope of messing with powers with which you shouldn’t be messing could prove especially resonant if, as I suspect, we’ll discover that Murdock got his old life back by making a deal with the devil.

It’s instantly obvious that the issue of illegal immigrants is going to be a major theme in Charles Soule’s run on Daredevil, at least for the immediate future. Many of the members of Tenfingers’s Chinatown cult are portrayed as illegal immigrants, as are many of its victims; so is Blindspot, the young apprentice with technology-based invisibility powers that Daredevil has begun to train. It’s a controversial issue in the cultural conversation of contemporary America, and it’s perfect for Daredevil in particular: more than half a million illegal immigrants live in New York City, many of them from the East Asian cultures with which Daredevil’s mythology is suffused. Ninjas and Triads are among his most important secondary characters, after all. But making the illegal immigrant issue a major stake in the book (without turning it into a “political” comic on either side of the spectrum – which it very much hasn’t) brings one of Daredevil’s main conflicts into the spotlight: despite the fact that he’s now a prosecutor rather than defense attorney, putting Matt Murdock and Daredevil ostensibly on the “same side” of the law, that is, putting away criminals, as representative of the State of New York, Murdock is responsible for enforcing its laws. And illegal immigration is, not surprisingly, illegal. As Marge Simpson once said, their “only crime was violating U.S. law!”

In the real world, New York City has softened its stance on illegal immigrants – for instance, under normal circumstances, police and most city workers are not allowed to ask about a person’s immigration status. But I can see a point in the future where Murdock, as Assistant D.A., is required to prosecute someone and attempt to have them deported, while at the same time training an apprentice whose status vis-à-vis Citizenship and Immigration Services is nowhere above board. Those internal tensions and paradoxes are part of what makes Daredevil such a great character, and Soule clearly has a very good grip on that. Even under the book’s new management, Daredevil is still Marvel’s best comic. Well, tied with Squirrel Girl.

Where to Start: Daredevil #1 Time commitment: Only one issue
Recommended if you like this: Daredevil Noir 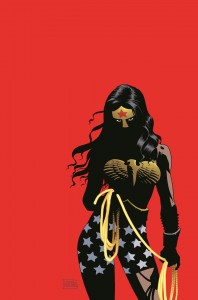 Carrie Kelly, a.k.a. Robin, a.k.a Catgirl, is in police custody after impersonating Batman and kicking the crap out of a bunch of cops. She continues to loudly declare that Bruce Wayne is dead; of course, we all know that he isn’t even before the big reveal.

The more interesting part of this issue are the B and C plots. The Atom is determined to restore the citizens of the shrunken Kryptonian city of Kandor – trapped in a bottle for the past few decades – back to life-size, at the behest of Lara Kent, the daughter of Superman and Wonder Woman. This issue too, like the previous one, includes a minicomic stapled right into the middle pages of the regular-sized comic, a gimmick with which I am totally onboard. This time it’s Wonder Woman #1, which portrays a short scene of Diana attempting to engage in training with Lara, who casually rejects the effort, telling her mother, “I’m not like you. I’m Kryptonian.”

So when we learn near the end of this issue that The Atom, in successfully unshrinking the Kandorians, has made a horrible mistake, we finally discover what the “Master Race” of the series title refers to. In the intervening years there’s been a bloody uprising in Kandor. The evil Quar has taken over, slaughtering anyone who opposed him. Now normal sized and free to bask in the Earth’s power-infusing yellow sun, the Kandorians are set to unleash their wrath on the humans.

Which raises the question: did Lara know? We’ve seen that she’s more than proud of her Kryptonian heritage – she’s arrogant about it. Did she deliberately set up Dr. Palmer to free Quar and the evil Kandorians? Or was she just as ignorant of the revolution as he was? Whose side is she really on, and how will this tie in with Bruce and Carrie’s story?

This is good stuff that faithfully continues the Dark Knight saga while digging deep into DC mythology and making new connections out of old dangling threads. Between this and the Ninja Turtles crossover, what mainly comes to mind is this: it’s great to be reading Batman again.