By Matthew Belinkie and Peter Fenzel,
with apologies to Clement Clarke Moore

was the night before Star Wars outside AMC.
The fanboys were lined up, transcendent with glee.
And they Instagrammed, Facebooked and Tweeted their joy
To each ticketless, stuck-at-home fangirl and boy.
Our spirits were high as our hopes (and our dreads,
because visions of Jar Jar still danced in our heads).
And my date in her Jedi robes passed me a flask,
Which I tried to imbibe through my Kylo Ren mask.
When up from the front of the line came a shout,
Like a Wampa or Rancor was lurking about.
I raced towards the tumult, as fast as a pod
To see what disturbance the Force brought our squad.
I saw some stormtroopers point yonder in awe.
When I followed their gaze, what a wonder I saw!
I steadied myself on a droid (parking meter?),
For there, pulling near, was a Tatooine Speeder!
With pilot in burlap, a hood o’er his face,
Smoothly steering his craft to a handicapped space.
Vaulting over the side, to the sidewalk he came,
And seeing us there he addressed us by name:
“Now Leia! Now Lando! Now Biggs, Wedge and Porkins!
On Boba! On Jabba! On Taags, Pietts and Tarkins!
To the long, long ago! To the far, far away!
John Williams! John Williams! John Williams will play!”
Now he threw back the hood, and the crowd came alive;
‘Twas Lucas! George Lucas himself had arrived!
He was dressed all in flannel, of black and of red,
And a nest of white curls sat on top of his head.
His beard framed a smile, his eyes were alight,
And they sparkled like lightsabers piercing the night.
“George Lucas,” I gasped, “have you come here to see,
How the Force will Awaken in IMAX 3D?”
“Not exactly,” he said. “I am here on a mission:
It’s Episode VII: The Special Edition!
My sack’s filled with CGI changes extensive,
And creatures with cringeworthy accents offensive.
I’ll add some soliloquies all about sand.
And for the Blu-Ray I’ve got more changes planned!”

hen the beeps of a droid could be heard from the alley.
I sensed some addition was made to our tally.
As Lucas’s face grew a Palpatine frown,
Down the fire escape leapt a girl in a bound.
She was wrapped up in muslin from goggles to soles,
And a beaten-up BB-8 after her rolled.
Her eyes, how they focused! Her jaw, how set solid!
A mountain of soul in a valley of squalid!
Her angular frame spoke of “quarter-size meal,”
But the will in her sinews said “Jedi-born steel!”
She strode up to Lucas and said, oh-so-tough,
“One Holiday Special was more than enough!”
As poor Lucas started to gripe and to grouse,
She whipped out an envelope marked with a mouse.
“I bring you a Christmas gift from my employers:
A cease-and-desist from our Walt Disney lawyers!
We paid you four billion, your galaxy’s ours.
(Also Indy, and Willow, but mainly the Stars,
And the Wars that are in them.)” “You wouldn’t!” he sneered.
“Just try us,” she grinned, gently tweaking his beard.
Then Lucas deflated and said with a sigh,
“Your midi-chlorian count’s certainly high.”
The man turned his heels, to the speeder he flew,
“I’ve got a bad feeling, let’s book it R2!”
But I heard him exclaim, ere he dove in headfirst,
“May the Force be with you! Also: Greedo shot first.” 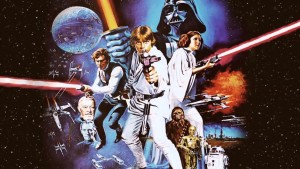