To celebrate the 25th anniversary of Home Alone, we continue last week’s discussion of whether this is a film about the value of family, or whether it’s an excuse to see a child almost kill Joe Pesci.

Fenzel: My first thought is that Kevin is a great character for family entertainment, because he’s a sitcom character who can be his own A and B plot. In any sitcom (and in this I’d include most television action dramas and cartoons that are structured like sitcoms), you’re going to have the A plot, which is usually a matter of material consequence, and the B plot, which is either the opposite of it or a different dimension on it. Like in the Full House episode where Stephanie crashes the car into the house and attempts to flee to Mexico, there’s a side plot where Uncle Jessie is jealo 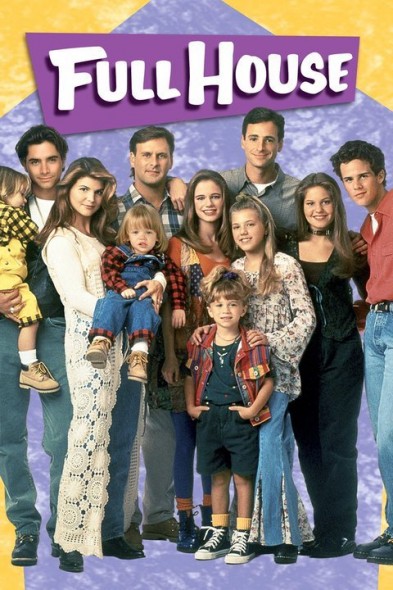 us Becky going on a date. Or like in the episode of Friends where Rachel finds out that Ross is in love with her, Joey Tribiani also can’t have sex with his girlfriend because he’s getting paid to do a fertility experiment. Different scopes and scales, complementary stories. And in the end the two stories often come together in some way, but don’t always.

So we have Kevin’s A plot in Home Alone, which is that the Wet Bandits are going to rob the house, and Kevin’s B plot, which is that he misses his family after all and doesn’t really want to be alone.

But then I remembered that Kevin doesn’t carry the B plot by himself; the B plot is Kevin’s mom Kate (Catherine O’Hara) realizing Kevin is gone and scrambling in a panic to get back to him. So Kevin’s emotional desire to be with his family after all is echoed by their desire to be with him. It’s interesting because the plots don’t split cleanly – Kevin and his mom seem to have a bond with each other, where something one does will affect the other across the ocean. It’s not really presented as supernatural, more a coincidence and storytelling convention, but Kevin is participating as the other end of his mother’s plot.

And then this comes together in the very complex scene with the music that always makes me cry, where his mom comes home and find Kevin has taken on her role of preparing the house properly for Christmas, and Kevin reverts back to being much more like a plausible child without the elevated dialogue and doesn’t really talk and just hugs his mom.

Belinkie: You mention how in sitcoms, the two plots often collide at the end (Larry David seems to devise his plots by reverse engineering them from the end collision). But in this case, the burglar plot is completely resolved before the family returns. They have no idea it even happened at all. You could easily imagine a version where the mom arrives in the knick of time to knock the burglars out, or the whole family arrives home to find the police dragging the burglars away. But not only does the family stay missing until the next day, but the house is pretty much restored to pristine shape (except for Buzz’s room). 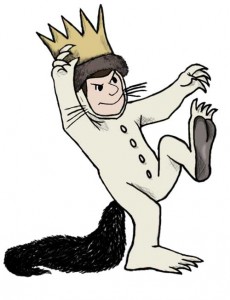 Fenzel: I kind of wonder in the last scenes there if there’s a subliminal sense that Kevin needs to clean the house up or else he will be in trouble for all the jumping around and various nonsense he did while they were gone, and that the fact that he managed to clean the house is the end of the last threat the bandits presented. As if his family would blame him for the mess if there was a home invasion.

Stokes: That lines up with the idea that it’s basically ​Where the Wild Things Are. If smacking the bandits down is part of the carnivalesque upending of Kevin’s world – arguably the high point of it – then all of that needs to be flipped rightside up again for the order to be restored.

Although maybe the shovel is the genital phase. I don’t think this is a schema worth fleshing out.

Stokes: ​Trying to clean up the house before your family gets back is also very John Hughes, or at least very Ferris Bueller.

Fenzel: ​Now that I think about it more, one thing I’d like to point out is how miserable Christmastime at the McCallister’s is at the beginning of the movie. I think this is important, and this is part of why I cry when I watch Home Alone and part of what pulls the movie together if it is pulled together. 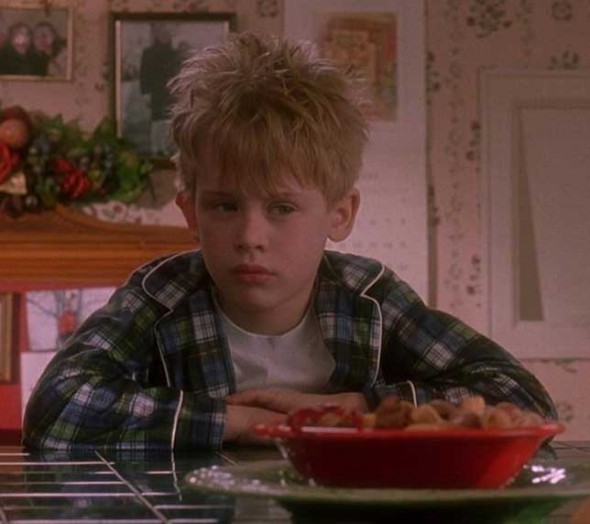 At the beginning of the movie, Kevin is already “home alone.” He’s totally abandoned in the mess of Christmas. He’s hungry and is not being fed (his cheese pizza!), he’s being bullied in his own house, he’s certainly not being loved or cared for. This is not Kevin’s fault, it’s his mother’s fault (well, his father’s too, but the mother is the one who fixes it, and one cannot blame Buzz for being Buzz anymore than one can blame the wolf for devouring the lamb). So the movement from being home alone to being home together is as much about the family fixing how they relate to Kevin as much as it is about Kevin realizing he wants his family back.

Except the scenes where the family realizes this are kind of minor scenes and not very exciting; it makes Kevin taking over the house more symbolic. The Wet Bandits want to steal from the house; they want to make the house less than what it should be. Well, the house it less than what it should be for Kevin already, because he’s not being cared for, it’s not a home for him. So Kevin defeats the bandits, proves his worthiness, and takes the house for his own. He also does a bunch of adult things, which intersect interestingly with kid things, and play with ironies between deference and power in the conventions of courtesy, and between self-ownership as indulgence and self-ownership as restraint.

So, yeah, it’s a weird proxy that doesn’t entirely fit, but I think it works in the story; Kevin setting the traps and defending the house is a stand-in for winning the affection from his family, and specifically from his mother, that, no matter how independent he gets, he’s still going to want, 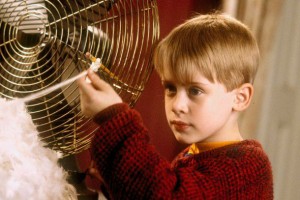 but which is denied him because his home doesn’t have family, it has invaders. It’s interesting that Kevin doesn’t really attack the bandits directly too much, he enlists familiar objects around the house as traps. In a cartoon the items he uses in his traps might have had eyes and smiles and talked. Kevin is less alone when he’s with his gangster movie than he is when he’s with Buzz. One can be home alone among a bunch of people, or be solitary at home, but legion.

Belinkie: Pete, I think it’s important that the scariest moment for Kevin isn’t the home invasion – it’s the old gangster movie. That’s sort of an admission that the burglars exist on a different storytelling level. Kevin reacts to them in a cartoon way that’s a little different than the way he reacts to, say, the furnace.

Fenzel: Very good point. It’s not that Kevin doesn’t fear for his life. He does. He isn’t scared of the bandits though. That definitely seems like a shifting level of reality for the audience.

Stokes: I quite clearly remember that, when I saw Home Alone as a kid, the idea that the burglars might kill Kevin was not on my radar. I was worried they were going to “get” him. Not sure that I thought it through any more clearly than that.

Fenzel: One another thing on Home Alone from me, and it’s related to the notion of it being at cross-purposes with itself. 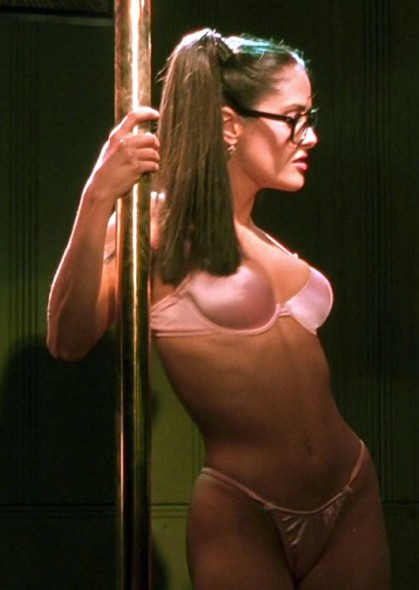 The only picture I could find of her character. Thanks internet.

In the Kevin Smith movie Dogma, there’s a line by Salma Hayek’s character The Muse, where she says she’s inspired nine of the top ten box office movies of all time, but for one of them, some guy had to sell his soul to Satan… and she makes the Home Alone face.

This line always struck me. Maybe it’s a self-deprecating backhanded compliment, like Tre Anastasie from Phish bemoaning that he could never write “Mambo Number 5.” But I think it’s meant as a cheap and obvious joke, and it instead hits on some truth. Through the mists of memory I feel like Home Alone is very different than a lot of other very huge box office hits. It’s smaller. It’s talkier. It’s really​ performance-driven. There are few other box office titans with entire scenes that take place at grocery store check out counters. The special effects are not that much bigger than the scale of the regular world as presented. There’s no part of it that really tries to awe or stagger you with the capability of modern cinematic production.

It’s way down at #68 in domestic gross now (right ahead of The Matrix Reloaded, but behind Monsters, Inc., with God knows how much in VHS, DVD and TV airing dollars), but it might be the highest-grossing movie on that list (not inflation adjusted) that gives the impression that somebody could have possibly made it themselves without the help of a major investor or studio.

But that’s just it. In The Muse’s joke, she says “some guy” had to sell his soul to Satan to make Home Alone. But despite its remotely feasible DIY scope, there is no one person who can be said to be responsible for it, as far as I can tell. The movie has a bunch of collaborators who have very strong individual creative voices that I don’t generally see as meshing well with the creative voices of other people unlike themselves.

It’s directed by Chris Columbus, who have us the early Harry Potter movies, Goonies, Gremlins, Mrs. Doubtfire, and, for some reason, Adam Sandler’s Pixels. But it is also written by John Hughes, the 80s teen angst bard of Ferris Bueller’s Day Off. And that’s surprising when you’re used to thinking of this as a children’s movie, but makes a lot more sense as you parse out what actually happens. 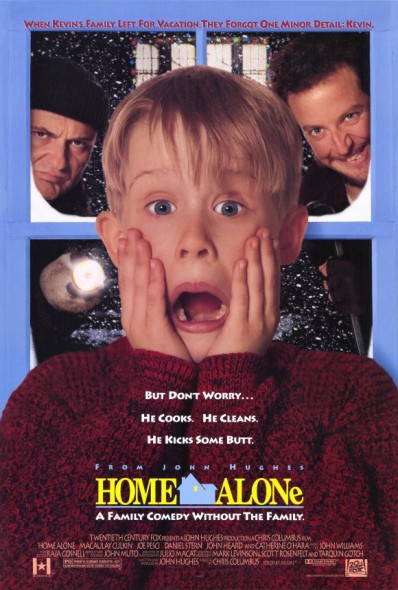 Of course there’s Macaulay Culkin, who became maybe the biggest child star of all time overnight. Oh, and Joe Pesci is in this movie, and he doesn’t really hold back, which makes the movie his whenever he’s onscreen. And you have Catherine O’Hara, who is CGP: Christopher Guest Posse, and who based on her other work seems like an unlikely choice for this movie and who also seems to fully own it whenever it’s hers.

And remember this movie has a John Williams score, which is really crazy when you think about it.

I expect all these people to do specific tones of movies, and those tones are not compatible. And yet they each seem to own this movie. Such split personality! Such a strange crossroads of oeuvre! Home Alone doesn’t seem to speak with any one voice, and yet it does all blend so that it seems unified on the consumption to a much greater degree than it should. It works so so much better than it ought to.

Like a Kevin Smith deity, I’m confused, confounded and a little disappointed and humbled that it exists in our world.