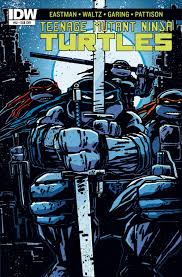 Mostly a transitional issue, that’s not to say there isn’t a lot of action here. But Splinter and the Turtles are still settling into the rather unsettling position of leadership of the Foot Clan, and not everybody is happy about it. Not Michelangelo, who’s left his family and home over it, and in this issue joins up with the Mighty Mutanimals – though he’s very reluctant to trust the likes of Old Hob. Slash even baked him a cake with his name on it! Albeit misspelled. But hey, even the Turtles creators misspelled Michelangelo’s name for the first seventeen years of the TMNT’s existence (with an extraneous a).

Leo and Alopex retrain the Foot Soldiers to turn disadvantages into advantages, imbalances into balance, using surprise and flexibility to maintain control and discipline over opponents – to dazzle and intimidate the enemy, in other words, and only kill when absolutely necessary. This philosophy doesn’t suit one of Shredder’s former students, however: the long-taloned Foot Assassin who reveals herself as Jennika feels that Splinter is making the Foot Clan soft, and sells them out to the Street Phantoms (a high-tech street gang with matter-phasing technology…and characters rehabilitated from the generally awful penultimate season of the 2003 TMNT cartoon Fast Forward, which is a pretty impressive feat, making anything from that misstep of a season in the otherwise pretty excellent series interesting. Woah, was that last sentence intelligible, like, at all? Sound off in the comments! I reallly like my circuitous sentences maybe a little too much). Splinter, Alopex, and Leonardo manage to defeat them, and Splinter even convinces Jennika that he’s not as much of a softy as she thinks he is – he did kill Shredder to take over the leadership of the Foot, after all. Jennika accedes to this much too quickly, if you ask me – I wouldn’t be surprised if she’s not so easily turned to the Light Side as she wants it to seem.

Like I said, a transitional issue. A bit of a breather from the excitement of the last couple. Next month might prove to be more intriguing, with the introduction of Darkwater – yet another obscure organization rescued from the cartoons, this one the latter-day seasons of the 1987 cartoon, known by fans as the “Red Sky Episodes.” I really love these deep cuts. Makes me feel like the people in charge of this stuff know their history – or at least their Turtlepedia. 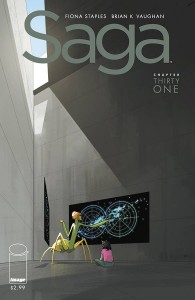 Before participating in the Overthinking It Book Club last year, I’d never read Saga. I knew of it, I knew it was written by Brian K. Vaughan, whom I liked, and that it was incredibly well-regarded by comics-readers. The Book Club was a perfect opportunity to get on board, and oh man did I discover how good this series is. We covered the first 18 chapters (Volumes 1-3) in the Book Club, and I picked up the subsequent two collections on my own afterwards. Now, that I’m all caught up and Saga is back in serial form after a hiatus, and I couldn’t not get on the monthly train.

We pick up a couple of years after Hazel – the hybrid child of star-crossed lovers Alana (winged and techno-savvy, from the planet Landfall) and Marko (horned and magic-wielding, from Landfall’s moon, Wreath), whose races have been at war for as long as anybody can remember – was kidnapped by terrorist group The Last Revolution, along with Hazel’s grandmother Klara. Flashing back, we learn that the terrorists’ ship was discovered and disabled by the Royal Guard of the Robot Kingdom (mercenaries for the Landfallians); when boarded, the surviving Revolutionaries, plus Klara and Hazel, claim to be kidnapped slaves, and that there had been a mutiny on the rebels’ ship that led to the deaths of all the terrorists. The Robots buy this story, eager to collect bounties on the actual dead terrorists, and dump the survivors in a detention centre for enemy noncombatants.

This is where Hazel attends kindergarten.

Fiona Staples’ art is nonstop gorgeous, particularly the facial expressions, which flawlessly depict the characters’ thoughts and feelings with humour and pathos that I don’t think I’ve ever seen in a comic book before.

This begins the new volume where we’ll see a few years in which Hazel lives without her parents for the first time. This wasn’t the most intriguing or the most dramatic issue so far (full-page nude transgender shower scene notwithstanding – as noted about previous chapters in the Book Club, Saga continues here its trend of being pretty aggressively diverse, not that that’s necessarily a negative thing), but it’s the start of something that I can almost guarantee, based on past experience of the series, will pay off in the end.

Where to Start: Saga Deluxe Edition Volume 1 Time Commitment: 30 “chapters”
Recommended if you like this: Y the Last Man Book One 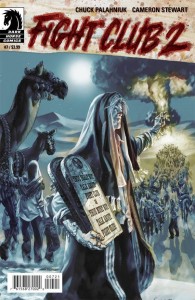 So Bob is a zombie now I guess. Please, Chuck. Please. What are you even doing.

Where to start: Fight Club 2 #1 Time commitment: six issues
Recommended if you like this: Make Something Up: Stories You Can’t Unread 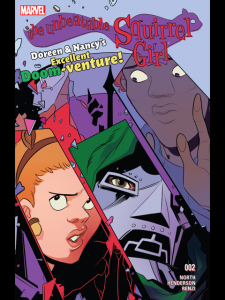 On the first page, Squirrel Girl and Tippy-Toe (and Squirrel Girl’s bed!) are mysteriously transported to the 1960s and also erased from the timeline! In your face, decompressed storytelling techniques!

Anyway, while Doreen and Tippy hang around in the summer of ’62, her friend from school Nancy seems to be the only one in the present who even remembers that Doreen ever existed. What happened? Who sent Squirrel Girl back in time, and why? How has her existence been erased and why hasn’t Nancy forgotten about her? When did she get that boss new haircut?

As Squirrel Girl tries to figure out what’s going on, we get a glimpse of what Marvel’s New York City looked like before it had superpowered folks flying and swinging around and wreaking so much destruction that there’s a company that specializes in insuring and reconstructing properties damaged by superhero fights.

Now what’s actually really interesting is that in a world before superheroes (or at least before superheroes were public knowledge), Squirrel Girl is now the only and therefore best superhero. Marvel typically uses a kind of sliding-scale timeline, where time does pass but at a weird rate relative to the real world, and which makes it seem as if characters’ histories get yanked forward like I’m going to say a piece of string; like for instance Spider-Man first appeared in August 1962, both in our world and the Marvel Universe. In our world, of course, more than half a century has elapsed since then, and yet while it’s also currently 2015 in the Marvel Universe, clearly Peter Parker was not bitten by that radioactive spider over fifty years ago – Spider-Man is not a nearing-seventy-year-old dude, but probably closer to being in his early thirties. Wait. Oh God, Spider-Man is younger than me. I am so old. When did I get so old? WHY IS THIS HAPPENING TO ME.

Um. Sorry. Anyway. By cleverly setting this time travel story in the year 1962, before the first appearance of Spider-Man both in our world and his (about one month before, as a matter of fact…), we’re going to get to do the high school Shakespeare essay compare-and-contrast thing between those classic Marvel superheroes in their natural habitat and Squirrel Girl, maybe the most 2015 superhero of all time, playing the fish out of water (a role seemingly more appropriate for Koi Boi, gnomesayin?).

Plus Doctor Doom shows up right at the end. That’s not a spoiler because he’s on the friggin cover of the comic. Next issue’s gonna be groovy as heck, I bet.

Where to Start: Unbeatable Squirrel Girl #1 Time commitment: One issue
Recommended if you like this: Adventure Time Volume 7 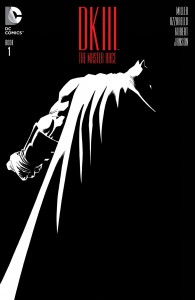 The original Dark Knight Returns from 1986 is probably still the most important modern superhero comic, but Frank Miller’s own returns to that timeline have not been nearly as celebrated, to say the least. 2001’s sequel The Dark Knight Strikes Again was savaged by readers and critics. All-Star Batman & Robin, the Boy Wonder, published between 2005-2008, was set at the beginning of Batman’s career but in the same continuity as the Dark Knight books despite certain anachronisms, and was also heavily criticized for its portrayal of Batman as a borderline psychopath (not to mention his use of the word “retarded”).

And Holy Terror, published by Legendary Comics in 2011, was originally intended to be a Batman book (titled Holy Terror, Batman!) wherein the Dark Knight defends Gotham City from an attack by Al-Qaida; although the final version turned Batman into an unrelated expy called The Fixer so that it isn’t really part of any Batman continuity, I’m still including it as part of The Dark Knight’s philosophical continuity – and it was decried in a similar way, with the most common criticism being that was “Islamophobic.” For the record, it’s not. Holy Terror is certainly imperfect and problematic, but it’s not Islamophobic. It is a piece of self-admitted and self-aware comics propaganda in the tradition of Captain America punching Hitler in the face in 1940 (was that Germanophobic?), and it absolutely has its place within the popular culture’s discussion of fundamentalism, terrorism, and what the correct responses to them ought to be. Criticize it artistically or politically, but don’t try to dismiss it with knee-jerk thought-terminating clichés just because you suspect that Frank Miller voted for George W. Bush in 2004. Some people have no tolerance for people with beliefs that are different than theirs. 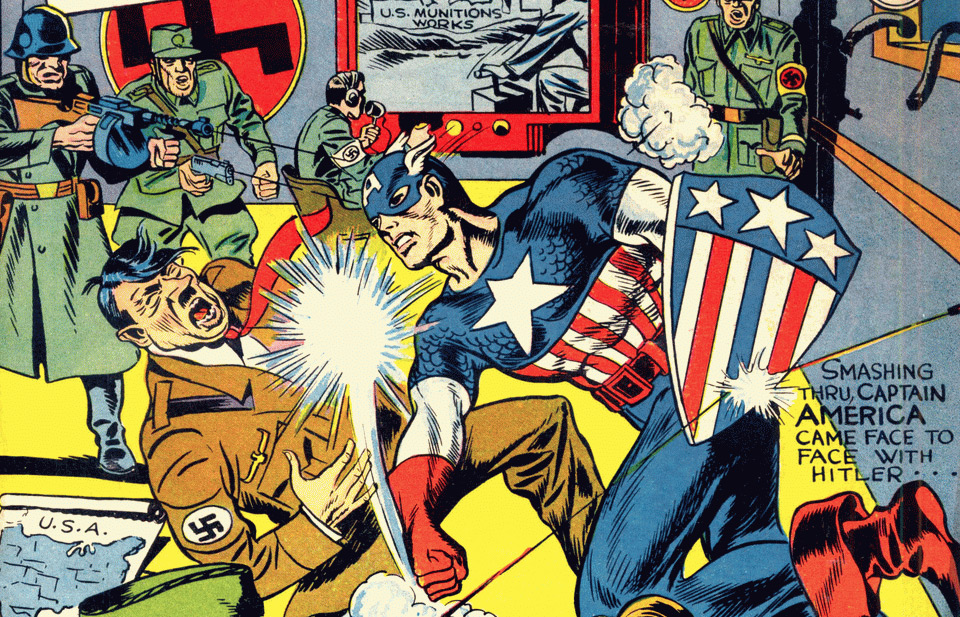 Anyway, so now here comes the unexpected third part of this series and nobody was really sure what to expect. This time, Brian Azzarello is helping out Frank Miller with the story, and it starts out with a blatant statement to those readers who think that the Dark Knight series ought to just lie where it is: “A good death? There’s no such thing…”

As we all know, the Gotham City Police Department is rife with corruption. When Batman – who’s been gone for a while (again) is caught on video apparently attacking some police officers, the arguments in the media and on the street over whether he’s a good guy or a bad guy re-erupt. Similar arguments, in fact, as to whether Frank Miller is a good guy or a bad guy: “It’s like he can just waltz in willy nilly every few years and pick whatever crime he wants to solve.”

We also get an actual minicomic stapled into the middle of the book starring The Atom. Lara Kent, daughter of Superman and Wonder Woman in this continuity, comes to The Atom to enlist his help in returning Kandor (the Kryptonian city saved from the planet’s destruction by being shrunk to the size of a dinner plate) to its original size. It’s a really cool gimmick, the minicomic, that makes us aware of the limitations and possibilities of the physicality of the comic book medium, something that’s not taken advantage of very often in the superhero genre in particular, and which is particularly unexpected in a Frank Miller Batman book, so I really enjoyed it. I wonder what the ebook version did.

It’s more of a reintroduction to the world and its characters – not a lot actually happens – but it feels new and yet familiar, and the unfolding story is intriguing…when it turns out at the end that “Batman” is actually Batgirl and “Bruce Wayne is dead.” Well, we’ll see about that. And we’ll see what the “Master Race” of the title is all about. And what will happen with Lara, The Atom, and Kandor, and how they all tie in (if at all). No matter what, this isn’t just another Batman comic – it’s going to end up as a piece of the Dark Knight legacy, and it’s worth taking seriously even just for that.

3 Comments on “Frank Miller Returns to the Dark Knight”