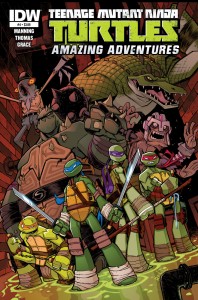 The second part of the origin of the Mutanimals happens here, so it’s a flashback to the period during the first half of Season 3 of the Turtles cartoon where the Kraang had taken over New York City. At the same time, this issue has a flashback-within-a-flashback, giving us sepia-toned insights into Slash’s accidental ninja training back when he was just Raphael’s pet turtle, Spike, hanging around the Turtles’ lair munching a leaf and witnessing Splinter’s ninja lessons. Evidently the thing that Slash internalized most of all is that working together as a team always beats working against others all alone. This was the inspiration behind Slash assembling the Mutanimals – a handful of mutants we’d seen before, who had stayed in NYC during the Kraang invasion and were now prisoners of the Kraang. Slash actually uses some brains (no pun intended…because Kraang…brains…you know), learns the other mutants’ strengths and weaknesses, and creates a plan to help them all escape – even without every member of them realizing it.

Some cool character development for Slash, and a nice-looking splash page of the Mutanimals together for the first time, make this story pretty fun. But it’s not up to the level of the first, really promising issue of the series.

The backup story features Donatello finding an ancient relic – a cassette tape – at the garbage dump and becoming obsessed by it. With all his technical ingenuity, though, he can’t build anything to play the thing. April volunteers to find a boombox or something, and ends up trading a record player needle (also from the dump) for an old stereo; then she’s attacked by a Foot Soldier. The tape turns out to be a rare demo from an obscure 80s indie band called Coco and the Pebbles.

Again, this isn’t the best of the backup stories that we’ve seen. Although the art style is neat. I actually really dig that we’re getting to see all these different artists take on the Turtles, and I hope we’ll get even more diversity in the creators on this book as it goes forward.

Where to Start: TMNT Amazing Adventures #1

Time Investment: Three issues
Recommended if you like this: TMNT Animated Adventures Volume 1 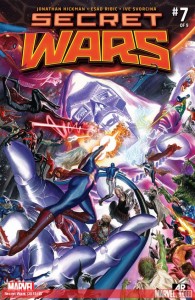 I’m sick of Secret Wars. Not only was it originally supposed to be over a month ago, but due to lateness they’re still only on Issue 7, but the miniseries has actually been expanded to nine issues instead of the originally intended eight. We already know (if we’re reading any other Marvel books) what the consequences of all this is/will be/has been, and it’s just more confusing than interesting. Characters are beginning to turn against Doom, suspecting the truth about him, and then some other characters are dying; but there’s also a lot of humour, which isn’t unfunny (I laughed a few times) so much as it just feels inappropriate. I mean, the Marvel Zombies are funny. T’Challa as King of the Dead is cool. But Zombie M.O.D.O.K. wisecracking at T’Challa over whether or not they should go after Doom is just…weird. It feels inauthentic, somehow. Similarly…has Mister Sinister been a gay stereotype for a long time, or is that something new to Battleworld? I don’t remember him ever being written this way before. Secret Wars is not making me feel any better about annual world-changing crossover events. Let’s get this over with already, please.

Where to Start: Secret Wars #1 Time Invesment: Seems like forever
Recommended if you like this: The Manhattan Projects Volume 1 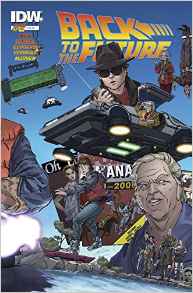 Back to the Future #2
IDW Publishing

We’ve always suspected that Doc Brown burned down his old family estate for the insurance money to fund his time travel experiments, but now we’ve got the real story – and it’s not nearly as simple as we thought. In 1962, in the midst of the Cuban Missile Crisis, Doc – whom we also now know worked for the U.S. government on the Manhattan Project in the 40s – was approached by the Department of Defense to help them stop the crisis from ever happening…by building them a time machine! Now, Doc has already depleted all his resources invented the flux capacitor, and happens to have a prototype temporal field capacitor sitting in his laboratory. The device is capable of sending object back in time, but only within the timeframe of the T.F.C.’s own existence, and only up to a few minutes. “Any further back,” he explains, “and I fear arrival at the targe date would overheat the capacitor and start and electrical fire.”

The government offers him unlimited money to carry on his research. So he takes the night to think it over – only to be visited by a version of Marty McFly from 1982, who speak only Russian! Marty takes him to the future, where the world is an anachronistic shambles. Worse even than the alternate 1985 we saw in BTTF2, this version of history has World War 2 soldiers fighting Roman Centurions on the streets of Hill Valley, and nuclear bombs falling in the distance. Doc realizes that in the future where he helps the U.S. government obtain the secret of time travel, it only spurs the Russians to do the same, creating a temporal cold war that presents world-ruining threats even worse than the Cuban Missile Crisis ever was.

He returns to 1962, realizing that he can’t help the government develop time travel but also knowing that they weren’t going to take no for an answer after he’d already shown them the prototype. As usual, time travel is the solution: Doc sends a letter (encased in a very fireproof container) to himself two months prior, just after he’d completed the prototype. This not only gives past-Doc the information he needs to “remember” everything that had happened, but overheats the capacitor in the past and ends up burning down the whole house (“insured out the wazoo,” fortunately). By the time the fellas from the DoD show up two months later, there’s nothing to show them, and anyway, Doc knows exactly what would have happened if he did.

That was just a really long recap, but it’s super neat to see all this backstory, catch up on what the characters were doing in the past (and the alternate future!) and work within the existing BTTF continuity in a similar way that BTTF2 did, behind and between what we’ve already seen (that rhymes!), showing us stuff about which we could only speculate before…and doing it without wrecking the legacy of the movies, which is what any more sequels or – God forbid – a reboot would have done.

Remember the Back to the Future Saturday Morning Cartoon, though? That was pretty heavy. 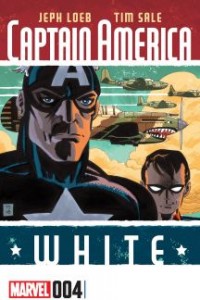 This issue is about regret, including the kind of preemptive resistance to regret that manifests in a mixture of determination and dread for which I don’t think that there’s a word in the English language. Or at least I can’t think of one.

Twenty yards away from the Skull, Captain America and Bucky want to take him out right then and there. But that isn’t the plan, and both Nick Fury and Marilyne (the French Resistance fighter who’s the Americans’ contact for this mission) stop them. Later, Marilyne tells Cap just how much she dislikes him and almost everything he stands for, and is only aiding the Americans because she hates the Nazis even more. “They want nothing less than to wipe us off the face of the Earth,” she explains to Cap. “It is more than genocide – which does not seem possible. They wish to erase our culture. Our way of life. You have no idea what it is like to be forgotten.”

When Cap responds with his (completely sincere), “Sometimes. Sometimes you have to have a little faith. A pocketful of miracles. It’s why we’re here. To free your – ” Maryline cuts him off.

“It is the French who will free France!” she asserts.

This week in particular, the whole thing feels eerily appropriate. Synchronistic, even. As Cap narrates in this issue: “We used to see the world in black and white. Like the newsreels and most of the movies. Was it a simpler time? The Nazis were undeniably evil. We’d barely come into the war, but we knew we were right on this one. We had come all this way to free France. To rid them of the Nazi scum. Remember? In the Westerns. We wore the white hats.”

That’s another thing that’s changed between Captain America’s time and ours. To win a war, you have to know that you’re on the right side of it. You have to be willing to do things you couldn’t have imagined before, things that you can’t promise yourself you won’t regret later. You have to be the Good Guys. Sometimes. Sometimes even that isn’t enough.