Matt Belinkie (MB): First of all, does anyone else watch the Shonda Rimes shows? I can’t say that I “like” either Gray Anatomy‘s or Scandal. But they always seem to be on my TV Thursday nights.

I think Scandal is one of these shows where the plotlines are so fast-moving that after a few seasons everyone has tried to f**k/marry/literally kill everybody in every possible permutation so many times that it’s dizzying. The whole thing is based around a love affair between the President and a Washington DC fixer, and it’s been on again off again so many times I can’t even. Also, the President is a Republican even though all his positions are super liberal.

Also, because they don’t want to write any character off the show, everyone is inevitably forgiven no matter how outrageous their crimes and betrayals. This guy Huck killed a bus of innocent people in the season finale last year. He’s back to working with the good guys, with only a “Don’t do it again, man” speech.

Ben Adams (BA): I watched the first 2 or 3 seasons of Scandal, but eventually gave up from exhaustion.  The secret-government-assasin-spy-plots in particular were just grating.  It was a show that definitely needed more Cases of the Week (COTW) – the best episodes were always the one or two week arc of a random politician that had a sex scandal with some juicy twist.

MB: I got really confused when it turned out that Olivia Pope (the protagonist) actually rigged a Presidential election. Just because. Isn’t she supposed to be likable?

BA:  Yeah, I had started writing an article that  a while back about how pop culture/narrative manipulates us into identifying the wrong people as good guys. The Joshua Malina character is the “white hat” Assistant US Attorney that finds out about the election fixing and tries to expose it, but fails for a variety of reasons.  There’s a bit in one of the season finales where someone is asking him why he associates with Olivia, and he doesn’t really have a good answer.

MB: At some point, does she express remorse for rigging the election? Because it seems kind of an insane thing to do, for someone who is generally a force for good. Like, was she so crazy in love with the man that she subverted democracy for him? 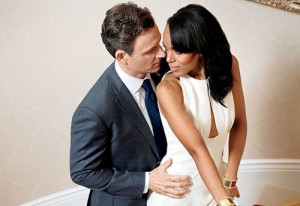 Amanda Jordá (AJ): I’m way late to this discussion, but I watch Scandal. Ask me anything.

About the good guy bad guy stuff, a few observations: I don’t think you can actually call Olivia or anyone on Scandal (except for maaaybe David Rosen/Josh Malina) the good guy. They call themselves that, but I always felt like Shonda meant it as kind of a joke, because it’s so freaking obvious how insanely awful/insane/irresponsible everyone is. Obviously, Olivia does “try” to do the right thing, but of course, she’s always already done a lot of crazy and illegal things, so nothing she does in the present can really erase all of that and turn her into an unambiguous good guy/white hat. So, she does regret rigging the election, but overall I think the show wants to allow viewers to enjoy all the madness without having to pretend that the characters you’re rooting for are blameless.

As a contrast, The Blacklist is a show that also has people who do very questionable things as the protagonists and then had a whole plot that looked at exactly that, questioning whether the main characters actually were “good guys” or not. It was really weird and interesting, there’s a trial in the second season and for a while it’s really obvious that the guys you root for on the show would be the people you’d wish were stopped in real life. But once the end of the second season and beginning of the third happened, the “actual” bad guys in the world of the show are so much worse that it serves to excuse all the crazy stuff the “good guys” do. In general, The Blacklist is a lot better than most action movies that come out nowadays, so if you like action-y stuff but get bored by the lack of story in current action movies, it’s a pretty good show.

BA: I admit I stopped watching Scandal at some point, but my sense was that for Olivia at least she’s always at least trying to do the “right” thing in any given episode…I don’t remember any completely immoral actions on her part, even if a lot of it is pretty shady politically.

AJ: [Has to step away from computer due to hysterical laughter]

AJ: That’s what her character tells herself. If you watch enough episodes, it’s very clear that what she considers acceptable means in the pursuit of whatever she’s trying to achieve is typically FREAKING INSANE.

You can sum up the show with the driving principle that “everyone’s drunk with power”. As a result every single character absolutely cannot see when something has gone too far (although in the world of that show, they kinda start at too far already).

BA: Yeah, the world of the show is this ridiculous version of reality where the main characters of the show are so unbelievably more competent/powerful/informed/intelligent than every other person.  They might as well be superheroes/villains, so their battles and aims have to he correspondingly grandiose.

AJ: You’re definitely right about the immoral means to mostly moral ends. But when the means are that crazy/messed up, does it really mean that the ends were righteous.

BA: I think in the world of prime time television, audiences are willing to forgive a LOT of “ends justify the means” -see Jack Bauer, for example.

AJ: Yeah, but I think 24 is a show that people took a lot more seriously, maybe also because it’s a “man” show, so it’s “important” and “real” and “gritty”. People think of Scandal as a soap opera for drunk housewives, so no one’s taking Scandal’s advice on policy or whatever

I mean, actual politicians have said they agreed with Jack Bauer’s means. You’re never going to hear someone say that about Scandal because the situations are a LOT less realistic, and on top of that, no one takes the show seriously as a real representation of politics.

BA: Breaking Bad is an interesting edge case about the difference between immoral ends and immoral means. It took a long time for people to realize just how bad Walter White is because he’s “doing it for his family” (even though that’s nonsense pretty much right from the start). It’s only when it is completely obvious just how evil his ends are that people really start to come around.  Though of course there’s still a substantial Scarface problem with Walter.

AJ: Yeah, I was about to say, a lot of people still didn’t get it. And the finale was kind of a Walter wish fulfillment episode, so the message wasn’t clear for the people who refused to get it either.

BA: I actually get really, really worried that people take Scandal seriously as a representation of American politics, particularly with respective to intelligence services.  The entire B613 plotline (focused on a covert agency run by Olivia Pope’s father) is unfiltered nonsense, but I think there are lots of people who think that could totally be real. 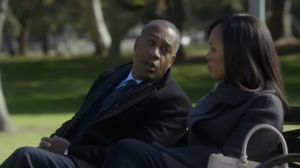 AJ: I’m curious though, what kind of people do you think might believe in the B613 stuff? Men or women, young or old? Because if it’s mostly younger women, they don’t tend to be taken seriously anyway, so what could come from that?

They can vote, but that’s about it, it seems. Like, young women who might believe the real world has a B613 aren’t gonna start a mass online movement type thing, because women just don’t tend to do that. Men who believe in silly things still manage to cause a lot of damage, while women, not so much.

BA: I haven’t actually thought that seriously about it, that’s an interesting question.  I worry a lot about the damaging effect that conspiracy theories as a general matter have on our political discourse, and stuff like this just feeds into it.  “Sure, B613 isn’t real, but that’s the sort of thing that goes on….”

MB: Oh hey guys, I fell asleep. I just figured out that the woman who plays the Vice President is Artemis from It’s Always Sunny In Philadelphia. Somehow this makes me like the show way more. I really want Danny DeVito to enter the Scandal universe and hook up with the Vice President. He could play the Secretary of the Interior or something. The next time Olivia wants to help rig an election, she’ll have to pay the troll toll.

6 Comments on “Do Olivia Pope’s Ends Justify Her Means? The Moral Philosophy of Scandal”