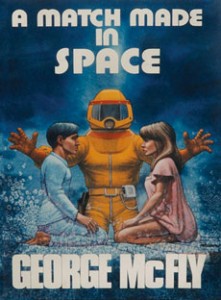 Special for the Hill Valley Telegraph

George McFly’s list of achievements is longer than the River Road Tunnel, but he’s managed to add another one: novelist. His first book, A Match Made In Space, hits Waldenbooks today.

“As a teenager, my favorite program was Science Fiction Theater,” he says. “This is my way of paying homage to those great storytellers of 30 years ago, and also cashing in on this whole Star Wars thing the kids are into.”

“You know, George Lucas didn’t come up with the name Darth Vader,” he adds, before trailing off into uncomfortable silence.

The book is a love story about a shy boy who admires a pretty classmate from afar. But one night, he is visited by an extraterrestrial with an unusual demand: take the girl to an upcoming school dance, or die a brain-melting death.

“It’s based on my true experiences,” McFly says. “I mean, the romance parts. Not the extraterrestrial parts, because that would be crazy. Who would believe that?” 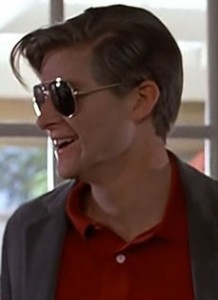 The protagonist has an ally in his efforts to woo his dream girl: a mysterious stranger who arrives in town only the day before the alien does, and leaves the night of the climatic dance. When asked if the alien and the stranger were meant to be the same person, McFly looks confused. “What?” he says. “No, how could… wait, hold on a minute… that son of a bitch…” [NOTE TO EDITOR: check with Standards and Practices before publishing]

George McFly, the first McFly to make something of himself in the history of Hill Valley, seems to live a charmed life. He and his wife are competitive mixed doubles tennis players, and his cars are always waxed to a disturbing level of shine. He is clearly successful enough to live in a much nicer neighborhood than Lyon Estates, but he says he’s always felt like the universe wanted him to stay there.

And do any of his children share his creative gift? “Well, Marty here isn’t much of a writer,” he beams,“but he was recently selected as first chair bassoonist in the All-State Orchestra!”

“I was? I mean, I was,” agrees the teenager, pale with admiration for his dad.

“It’s like I always say, if you put your mind to it, you can… goddamnit Biff, two coats!”

At press time, the space time continuum had been revised, and George McFly is now dead. Condolences may be sent to Biff Tannen’s Pleasure Paradise Casino & Hotel.

Happy Marty McFly Day! Celebrate by purchasing all three of our Back to the Future Overviews for only $4.99.

Or read more from… Featured, Humor, Movies, back to the future, marty mcfly

One Comment on “Book Review: “A Match Made In Space,” by George McFly [Back to the Future]”