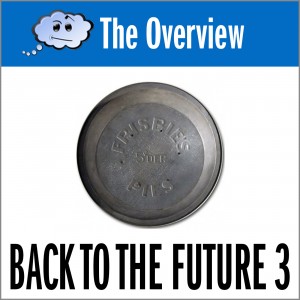 Over the course of the three Back to the Future movies, Marty McFly and Doc Brown accomplish a great number of nearly impossible tasks in their travels through time. In the course of their adventures, they harness the power of lightning, prevent the darkest possible version of Hill Valley from existing, and use a hijacked train to propel the DeLorean up to 88 Miles Per Hour. Here at Overthinking It, we’ve never done any of those things, but we’ve done something nearly as difficult: we recorded Overview commentary tracks for all three Back to the Future films in the span of one month!

At the beginning of this month, we knew we wanted to record commentary tracks for at least some of the Back to the Future films in honor of the October 21, 2015 Marty McFly Day milestone. However, we were a bit daunted by the prospects of recording commentary tracks for all three films in as many weeks.  In a moment of doubt, we created contingency plans for recording just one or two episodes, in the event that we ran out of time.

However, at the last second, Flea showed up in a pickup truck, and called us chickens for not wanting to record Overviews for the whole trilogy, and we’re sure glad he did.  Back to the Future Part III is a fitting and triumphant conclusion to the trilogy, and our commentary track for the film both examines the film on its own, but also ties together the larger discussions that we’ve been having throughout the course of all three commentary tracks.  In this edition, Pete Fenzel, Richard Rosenbaum, and Ryan Sheely discuss the many forms of Western film that appear in this movie, the self-actualization of Doc Brown, and how the series as a whole helps us to understand time travel as a creative act.

To get in on the fun, just purchase our commentary track in our online store for only $1.99.  At the beginning of the audio track, we’ll provide you with the instructions on how to sync our commentary track up with your DVD or stream of the film, and once you hit play, it will be like you are watching the film with your friends from Overthinking It right in your own living room.

GET THE OVERVIEW NOW

Or read more from… Featured, Movies, The Overview, America, back to the future, Back to the Future 3, DeLorean, marty mcfly, westerns