If you are not one of our many tween fans, you may be inclined to skip this video. But Tom is a particularly Overthinky children’s book author. The Origami Yoda series revolves around Dwight, a socially-awkward, barely-tolerated middle schooler. One day he starts dispensing advice via a Yoda finger puppet, advice that happens to be very good. Gradually, everyone in school starts coming to Yoda for guidance. The book is written in the first person by various characters contributing to a “case file,” trying to figure out if Origami Yoda is the real deal or not. 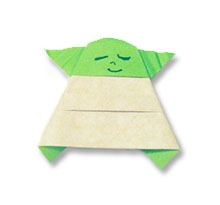 Even though Tom was loathe to dispell the mystery in our interview, there is pretty clearly no magic going on here, except the magic of pop culture helping us say what we can’t quite put into our own words. What Dwight is doing is no different than cosplay, or fan fiction, or any of the other ways teenagers express themselves through the media they embrace. Lloyd Dobler holding up that boombox is just another kind of Dwight.

I think the characters in this series are smart enough to know that’s not really Yoda talking. But because Dwight is an outcast, they can’t take his advice, even if they think it’s good advice. That’s why they are willing to entertain the “realness” of Yoda: they NEED that advice, badly. The middle school environment Tom depicts is pretty grim. Everyone is scared of being humiliated. Everyone is on the verge of tears. There are no adults to turn to for help, and all of the other kids are just as lost. So Dwight appropriates a sense of authority from Star Wars. He creates an avatar that isn’t a dorky middle schooler, and the other kids respond because they NEED a place to turn to that’s outside of their own insecurities. They trust the Yoda finger puppet, because they have no one else to trust… at least at first.

SPOILER ALERT. At the end of the five book series, the kids graduate from middle school, and Dwight writes a case file himself announcing that he’s sent Origami Yoda away on the Mail-lennium Falcon. But in a touching twist, he says that Yoda instructed him to fold a Force Ghost Yoda for his friends to rely on for a while, in case they have trouble finding their own voices. “A little more help they need,” Dwight/Yoda says. “After that… the Force will be with them.”

One Comment on “NYCC 2015: Tom Angleberger and the Power of the Force”