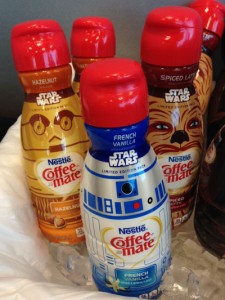 The coffee station in the NYCC press room. Seriously.

Even if George Lucas had never sold his empire and Episode VII remained a fantasy, Star Wars costumes would still dominate New York Comic Con this year. But factor in that sequel, a movie none of us ever expected to see only a few years ago, and you have a thermal detonator of excitement. If Disney sticks to its plan to produce a Star Wars film every year, maybe fatigue will inevitably set in. Maybe there will be a Star Wars backlash. Maybe one day poor Kathleen Kennedy will be as divisive a figure as George Lucas was.

But right now, Star Wars is nothing but potential, and they’ve got the best and brightest talent in Hollywood to choose from. (After all, half the directors working today grew up playing with Star Wars action figures.) And so on the eve of Episode VII, we decided to ask the super-fans what made this series unique.

May the Merch Be With You