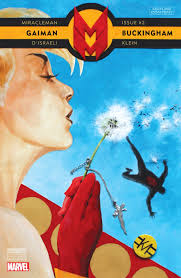 In the second Neil Gaiman-scripted issue of Miracleman, we continue to see things from the perspective of the regular people living in this world as remade in the image of the Miracleman Family into a new Golden Age. The main story, titled “Skin Deep,” is about a lonely’s windmill-keeper’s encounter with Miraclewoman; one night he sees her flying through the sky, and whispers, “I love you.” She, of course, with her superhuman senses, actually hears him, and comes down to talk to him. Through their ongoing interactions (which could not really be called a relationship), Miraclewoman teaches him that the reason for his aloneness – his loneliness – is that his demand for perfection in a woman is not only impossible but irrational. That just because she, Miraclewoman, is “perfect,” it doesn’t make her better than the women from his past that he’s rejected or lost interest in because of some perceived flaw. “Perfection,” she tells him, “isn’t anything.”

It’s interesting, first of all, because it shows that Miraclewoman is a very different sort of god than Miracleman (as we saw in the last issue). More caring toward humans in a traditional way, and more hands-on (literally) in her influence on the humans she now…what? Leads? Rules? Controls? We don’t know much about this new world yet, and seeing it through the eyes of those people who are living in it, people with whom we can actually identify, is far more emotionally effective than, say, watching these superhumans flying around taking care of whatever it is they take care of. We have to become grounded and invested in this world before its fate will concern us.

Reinforcing this further is the second story in this issue, titled “Trends.” Drawn in a style evocative of The Little Rascals, we learn of a youth subculture that’s cropped up in the wake of the evil Kid Miracleman’s defeat, and the subsequent reformation of the world. “Bateses” are a kind of greaser-style rebels, not a gang as such but an affiliation much like punks or mods who identify with the actions and beliefs of Kid Miracleman – real name, Johnny Bates. It’s our first glimpse into the fact that the world, as perfect as it may be, still has not only personal tragedies going on but also a larger societal backlash. How seriously this should be taken, and how widespread it may be, are still yet to be seen.

Sex Criminals by total comic book superstars Matt Fraction (writings) and Chip Zdarsky (drawings) is kind of revolutionary. It’s not like there haven’t been books about sex before, but I’m pretty sure that there hasn’t ever been one that took sex seriously while still being this funny.

When I first heard about Sex Criminals, I thought it just sounded kinda gimmicky: there’s this guy and this girl, and they discover that both of them have this power – when they orgasm, they stop time. Literally. So they decide to team up and rob banks. And, okay, maybe it is gimmicky – but you know what? It works. It works not only because Zdarsky’s art is perfect and the background gags he throws in are priceless, each and every one; but also because the whole thing is a joke and yet not a joke. It’s a discussion of sex and how weird it is and how weird we all are, but it’s also respectful of these characters and the audience, very much unlike your average sex comedy or any of the prurient excuses for superheroes that you see on the stands. All these weird people are weird, yeah, but they’re also people. And that’s clear nowhere more than the letter column (which I am so glad to see making a comeback in comics, by the way), wherein SC fans (or “Brimpers”) write in to share their tales of erotic discovery in the funniest and most awkward ways. That’s both discovery of what makes them tick as individuals as well as the literal discovery of mysterious abandoned porn in the woods, a surprisingly common phenomenon, evidently.

Okay, that said – the book is now into Volume 3 and has undergone a bit of Cerebus Syndrome. That is to say, what started out as a humour book (an uncommonly smart and sensitive one, but still a comedy book) has dialled back the comedy to a pretty significant degree in favour of the ongoing continuity. Which is fine! And that’s not necessarily a complaint. There does come a point where you, as a reader, are so invested in these characters, their lives, and their world, that you’re going to keep coming back even if your original reason for reading (i.e. the funnies) has disappeared. Which it hasn’t! Don’t get me wrong, SC is still funny. From the aforementioned background gags to the ever-increasing absurdity of the powers exhibited by the more and more people who turn out to have weird sex powers (in this issue, for instance, our protagonists, Suzie and Jon, are on the run from what the book describes as “some kind of weird cum angel” that looks like Sailor Moon with butterfly wings, has “an erotic demon that lives in [her] panties,” and is the product of this one guy’s erogenous emanations. This is the funniest issue by far for quite a while, but that’s also why it kind of surprised me – it seemed as if they were focusing less on the humour lately, but maybe that was just…a phase? I don’t know. This is a good book. Especially Volume 1. Read it. 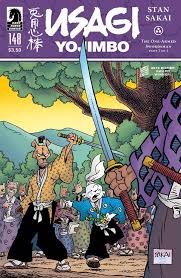 Usagi Yojimbo was one of the titles that ushered in the wave of self-published and otherwise independent comics that flourished in the late ‘80s and led to the current market conditions where the hegemony of the Big Two publishers is no longer so absolute. It’s also one of the most notable, recognizable and influential “funny animal” books to come out of that era, along with Cerebus the Aardvark and Teenage Mutant Ninja Turtles. The really really amazing thing about it, though, is that it’s still going. While TMNT has gone through the hands of a ton of different creators, publishers, continuities and media, Usagi Yojimbo has always been written and drawn by one man, Stan Sakai; and while it has migrated from publisher to publisher a couple of times, the continuity has always remained instact, with a single long story – the story of the life of a wander rabbbit ronin – being told over years and years. Decades, actually. This issue is the two hundred and fourteenth issue of the series (counting all volumes). While Cerebus went for 300 (from 1977 to 2004), Usagi hasn’t always been published on a monthly basis, and so chronologically it’s actually been going on for longer. Considering that Dave Sim made the claim that Cerebus was “the longest running continuous narrative in human history,” and since Usagi has now been running for four years longer than Cerebus did, that makes Stan Sakai our most enduring storyteller in comics or any other medium.

And no one deserves it more. This issue in particular is a self-contained story, so it’s a good place to step on if you’re interested, and has Usagi meeting a one-armed samurai with unfinished business. What it makes me think about, though, is that I miss comics with really high issue numbers. I mean, look at all the issue numbers for all these comics that I’ve been writing about here. Number one. Number three. Number five. Now here’s Number One Hundred and Forty Eight! Long-running series at Marvel and DC have been rebooted and rebranded so many times – presumably so as not to intimidate potential new readers, since I guess you might be reluctant to check in on the X-Men at Issue 501 or whatever, but if there’s a new #1 every year it might make it easier. I get that, but I also feel like there’s something important missing from most comics these days, and that’s history. It’s a delicate balance, weighing the value of long continuity against the inevitable contradictions, snags, and memory lapses that go alone with characters that have been adventuring since the 1960s or the 1930s, but when you read those books you felt like you were taking part in something enormous, a world so complex and layered and ultimately mysterious. Now that we’ve got Wikipedia, anyone can get caught up on a century of stories with just a couple of clicks and taps. Comics companies shouldn’t have to feel like everything needs to be all-new and all-different every other month. Those who forget history, are doomed to do something! Remember? Come on! We know how to count what counts! Let’s bring back the high numbers!