So many cool books this week that I’m splitting the analyses into two separate posts! So if you were angry about Reading List being late in the past, now you can be even angrier. Use that anger. Use it. 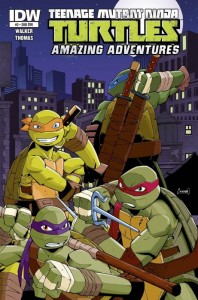 Last time I talked about the intriguing new villain that this series introduced (Zodiac) and the exciting prospects that come along with greater freedom in storytelling apart from the constrictive canon of the cartoon on which this comic is based. In this issue, we learn more about Zodiac himself – namely, that he was a friend of Hamato Yoshi and Oroku Saki years ago in Japan who obtained the powers of the Zodiac animals from a mysterious artifact. Unfortunately the resolution of this story is less satisfying than its beginning (the Turtles break the artifact, which turns out to have been Kraang technology), but we do get some cool action and at least one awesome surprise from Donatello (explosive tracking device!).

The really neat thing about this issue, though, is the backup story by indie comics creators Caleb Goellner (writer) and Noah Van Sciver (artist). Titled “Zine-Age Mutant Ninja Turtle,” Michelangelo is so bored that he decides to draw his own comic book of a made-up TMNT adventure wherein the Turtles encounter the Kraang at an outdoor music festival called EXEW. Van Sciver’s art is childlike in that self-published comic style and nicely calls back to TMNT’s own self-published roots while also evoking – quite honestly – the TMNT fan comics that I (and probably millions of others) drew as a kid. Which is great and perfectly suits the mood and the framing device of the story. Goellner’s script is full of little shout-outs to TMNT history, like the sponsor of the festival being the energy drink “Ground Chuck” (who was, in case you don’t remember, an obscure character from the 1980s TMNT series – a mutant red bull). This backup story reminds me of some of the old Mirage TMNT comics during the period when Kevin Eastman and Peter Laird were becoming estranged from each other and getting more involved in the business side of managing the franchise rather than the creative side; a whole bunch of issues were given over to out-of-continuity stories by independent creators – some terrible, but others were among the best TMNT stories ever published. This story is, of course, all-ages, and skews strongly toward comedy. But unlike most of the comedic stories told in the Mirage comics during the period I’m thinking of, this is actually funny. And it’s a great precedent, too. I’d love to see more stories like this by indie creators who aren’t known for their work on TMNT properties, even if they’re only short one-offs or backup stories. Good stuff. 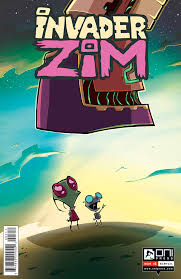 This is the first issue of this new series not to be written by Zim creator and all-around weird guy Jhonen Vasquez. But it was written by Eric Trueheart, another writer for many of the original Zim episodes back in the olden days when it was actually something called a car-toon on something called a television channel called Nickelodeon. And this issue really does feel like an episode of the show in a lot of places. Everything’s back to normal (Zim trying to conquer Earth; Dib trying to stop him; nobody else giving a crap) and we find Zim discovering some kind of ancient space evil on the planet Horkus 6, known as the Star Donkey that he plans to use to kick all the humans off Earth.

There’s some real funny stuff in here, you guys. Gaz’s selfie with “Bigfeets,” Zim posing as conceptual artist “Shminvader Shimm” to get the Star Donkey installed on Earth without arousing suspicion (and creating the opportunity to make lots and lots of jokes about hipster artists and their fans), GIR guarding a pen. I lolled. But I wonder if this series is going to keep doing what the TV show did (i.e. mostly episodic stories with only very minor continuity), or if it’s eventually planning to do what the creators were eventually planning to do with the show – if it hadn’t been unceremoniously cancelled – i.e. more continuity, longer story-arcs, more mythology type stuff (not, like, Thor, I mean learning more about the Irkens and the rest of the IZ universe). I guess we’ll find out! Unless the comic gets cancelled. 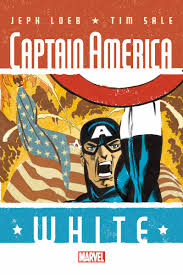 Jeph Loeb and Tim Sale continue their “Colours” series (focusing on the early years and defining adventures of some of Marvel’s most iconic heroes. There was Dardevil: Yellow, Spider-Man: Blue, and Hulk: Grey, and now they’ve turned to Captain America and painted him white. This series actually began with Issue #0 in 2008, and after waiting so long to get the first real issue of this series, we kind of have some extra sympathy for Steve Rogers waking up after so many years frozen in the arctic ice as the issue opens. But most of the story so far takes place during the heyday of Captain America and Bucky, toward the start of America’s involvement in World War II.

Like the earlier entries in this series, Captain America: White takes on some of the character’s most defining traits – the reason that readers have grown so invested in them over the decades – and delves deep. In Cap’s case, his guilt about Bucky – about taking a teenager into combat in the first place, inspirational for the homeland or not – and, of course, about letting him (seemingly) die while he himself survived.

As Loeb is very aware, it’s a lot harder to tell Captain America stories in a contemporary setting, precisely because he’s a man out of time. While that can make for great stories in the right hands, it can also be dangerous to the character’s integrity to keep going back to the well with how things were so much simpler back in his day, and everything now is complicated. On one side, the risk is oversimplifying modern-day conflicts into the kind of battles that Cap fought back in the ‘40s, because you rarely get the kind of obvious evil that the Nazis represented. On the other hand, there is also the risk of straying too far into relativism by overcomplicating contemporary conflicts in a way that does nothing but casts a shadow over Captain America’s idealism and make him seem pathetic rather than heroic. What I mean is that you can write really left-wing or really right-wing stories with this character – make Cap into a jingoistic caricature and portray that as either uncritically positive or ardently negative – both of which have been done in Captain America stories over the years, and neither are ever very good.

Is that wide middle territory one of the reasons that Marvel has recently passed the mantle of Captain America from Steve Rogers over to Sam Wilson (a.k.a. Falcon)? I think it probably is. Not that Falcon isn’t a cool character and a worthy successor (he already was the official Captain America several years ago, when Steve Rogers was believed to be dead). But I have to imagine that part of the reason that Marvel is “retiring” Steve Rogers is how alienating the character can be for contemporary audiences when not written and drawn by the absolute best.

Fortunately, the creative team on Captain America: White is the absolute best. Tim Sale’s art style here cannily captures the deceptive simplicity of the era in both history and comics itself, with cartoonier visuals than your typical contemporary Marvel book (at least the ones that are meant to be “serious” rather than comedic), and Loeb’s writing is also deliberately loose in many scenes, like the Casablanca barfight circa 1942 in which Captain America and Bucky first meet Sergeant Nick Fury and his Howlings Commandos. It’s the sort of scene that would have been much more common in war comics from that era, but which, in the wrong hands, could be perceived as either glorifying or trivializing war – whereas in our era it’s a lot more artistically acceptable to show war as relentlessly horrible. Loeb and Sale are the kind of creators who can believably portray a man’s sincere patriotism, or a teenager’s genuine hunger to see action beside his countrymen – sentiments that are pretty rare these days, at least in popular culture – without sugar-coating the violence and loss that goes along with it.

To Be Continued, True Believers! You didn’t really want three thousand words about comics all at once anyway, did you? You’ll get indigestion. Leave some for dessert.