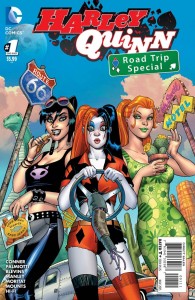 Harley Quinn – Joker’s abused ex-girlfriend – is probably DC’s most popular original character in decades (and she’s not even new anymore, having first appeared in Batman: The Animated Series back in 1992, and joining the mainstream DC universe a few years later), which probably says something about how difficult it is to create compelling superheroes and supervillains in such a crammed and storied medium. Under the authorship of Amanda Conner and Jimmy Palmiotti (probably DC’s best writers at the moment), Harley’s ongoing title has made her something like the DC Universe’s version of Marvel’s Deadpool – silly, violent, and more than a little meta. It was kind of the trial-run for DC to allow its titles some divergence in tone after lots of years of samey stuff across the whole company. Now we’ve got books like Bat-Mite and Gotham Academy and other weird stuff like what Marvel has been doing for years, and that’s a good thing.

So there’s a great character and a great creative team, so I’d love to say that this giant-sized special is great, but it’s really only just okay. That’s because it suffers from being a road-trip story, which is really hard to make into anything besides a series of amusing vignettes without any coherent narrative. That said, it is a series of amusing vignettes about one of DC’s best characters (plus her gal pals and frequent co-conspirators Catwoman and Poison Ivy), written by two of DC’s best writers, so you know it’s not going to be crap. It’s a lot of fun.

Harley’s beloved uncle dies, and she’s tasked with retrieving his ashes in California and returning them in the RV he’s bequeathed to his niece to his final resting place beside his deceased wife on Long Island. Harley decides to make a vacation of it, inviting her friends along for the ride. Fortunately, Catwoman has just learned about a necklace stolen from the Los Angeles Museum of Gems and Jewelry by the ridiculous dog-burgler Darkwolf. And Poison Ivy hasn’t got anything better to do. So they’re off!

From there on out it’s…well, like I said, a series of amusing vignettes. A number of different artists are featured in the latter half of the book, which functions mostly as advertising for some of DC’s other titles. The best of these, if you ask me, is Jed Dougherty’s illustrations when Harley and the gang run across Superman’s pal Jimmy Olsen taking Bizarro as far away from Metropolis as he can get him, which actually kind of made me want to start picking that book up too…maybe I’ll catch it when the trade comes out.

The Harley Quinn series has moved the Clown Princess to Brooklyn from Gotham and introduced a number of weirdos worthy of her, and took the lead in introducing some much-needed humour into DC Comics, but this special issue isn’t your best introduction to it. Check out the collected editions first. 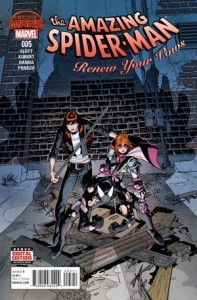 Final issue of this arc of the Secret Wars wraps up with the Parkers teaming up to defeat Regent once and for all. If you read my review of the previous issue you’ll already know that this series is kind of super great. Not only do we see the return of Peter as a married man, and introduced to the daughter with Mary Jane that he should have had all along, but the story itself is classic Spider-Man, funny and action-packed, and I probably used those exact words last time too.

What’s neat is that we see Peter’s daughter Annie May and wife Mary Jane taking everything they’ve learned from a lifetime of living with a superhero and applying it as effectively as anyone. Regent has been taking out all the superheroes in this region of Battleworld and adding their powers to his own in preparation for fighting Doom – whom we the readers, and Regent, know has positioned himself as god of this crazy mixed-up world called Battleworld. Unlike most of its other regions, though, the citizens of The Regency have no idea what’s going on and think that Regent is just evil and nuts when he talks about “a mad god looming over us! A lunatic called Doom! I need these powers to confront him! To free us all!” It hurts to hear this, because ultimately he’s actually right. While we all see that the ends can’t justify the means (right?), what Peter and the Spider Family have done in defeating Regent at the end of this issue (with a dad joke, no less!) will end up having cosmic consequences. The way that writer Dan Slott has tied the plot of this series into the overall Secret Wars without making it the kind of nightmare of continuity confusion and exposition that these kinds of events are so apt to becoming is a real feat of comics writing – plus, seeing MJ wearing one of Regent’s powersuits, and watching Peter’s spider-powered daughter, who’s all of, like, seven years old, kicking some ass (she suggests the superhero name “Amp” for herself, which is actually not bad – though I’m getting wary of the millions of spider-themed heroes that Marvel has been teasing for the new continuity once all of this Secret Wars stuff is finally over) is pretty rad too.

It’s a good place to end this series and hopefully start a new one. Spider-Man’s thing has always been, as we know, about responsibility. Having his own family takes that theme in a new and more adult direction – as we’ve seen, Peter was never very willing to kill anyone, no matter how dangerous, until it was his own daughter’s life at stake. As with great power comes great responsibility, with rising stakes must also come tougher choices. The best superhero comics live right there in that space where people with extraordinary abilities, in extraordinary situations, have to make difficult choices and live – or die – with the consequences. That’s what we got here, and that’s where I hope the Peter Parker Spider-Man titles will continue to lead in the future.