[This post has spoilers for the Game of Thrones TV show through season 5, episode 2. Is spoiler-free for the books past that point in the story.]

In our latest Game of Thrones TV Recap podcast (iTunes, RSS) on “The House of Black and White” (season 5, episode 2), I mentioned that Jon Snow’s election as Lord Commander of the Night’s Watch at climax of that episode was reminiscent of the Roman-influenced historical and mythological election of Arthur as king of the post-Roman, Celto-Brtiannic warlords; that the equality of the Night’s Watch with regards to each other was reminiscent of the Knights of the Round Table; and that, with his Valyrian steel longsword Longclaw at hand, Jon Snow might eventually develop into a King Arthur figure.

I wanted to elaborate a bit on what I meant by all that, and how I think correspondence and reference to historical and legendary figures and events work in the Game of Thrones universe, both in the show and the books. Because it’s not so simple. The characters in Game of Thrones definitely map onto different mythological traditions and historical events, but it happens in various complex and interconnected ways.

As you study it and find your “eureka” moments, where a specific source smacks of familiarity, what emerges is a “story of stories” plan in George R.R. Martin’s magnum opus. It’s very modern, almost Vorticist; everything is connected, and the more you look, the more things are connected.

The Historical, Mythological, and Literary Sources of Game of Thrones

In no particular order, these sources include the British Wars of the Roses, the Oresteia tragedies by Aeschylus, the Prose Edda and the Norse myth of Ragnarok, Arthurian legend, obviously some dose of larger European politics, obviously some bits here an there of Zoroastrianism, perhaps some fairly specific references to traditional Spanish mythology, and others. The phrase “the dragon has three heads” is taken directly from pre-Muslim Persian myths.

There’s a great short-lived blog: Game of Thrones & Norse Mythology, with a lot of great writing on the Norse mythological connections (and some dubious plot predictions based on them) between the various wolves and gods who participate in Ragnarok, but the Arthurian associations are I think generally less fleshed-out by the online commentariat. At least, I haven’t yet seen the definitive source on the matter.

This is particularly because a lot of it relates to events pretty late in the story, events the show is only getting to now, like Jon Snow being elected Lord Commander of the Night’s Watch, or Brienne’s quest to find Sansa and Arya (a chaste Galahad’s quest for a Girl instead of a Grail), or Melisandre showing up at the Wall, giving us our Morgana le Fey. As the story goes on it’s possible the characters who are far apart from each other might eventually come back together, making relationships like this jump out.

It’s generally thought that the idea of the Wall in the North is related mytho-historically to Hadrian’s Wall in Britain, which would place the Knights of the Round Table more or less in a corresponding place geographically. And let’s watch to see if the show ever has a “Sword in the Stone” moment. The books seem to be headed in that direction if you ask me, but in ways the show can’t do because it has cut a bunch of the relevant characters and left out a bunch of the relevant lore. But they may figure out a way to do it all the same.

And as you piece all this together, several rules emerge that seem to govern how it all works. And as somebody who isn’t sure which of these interpretations is “right,” but is pretty sure of a method of interpretation, here are the rules:

First, we do not know how the story ends yet, so a lot of this is speculative, and the relationship with textual evidence gets fluid. These are ideas living behind or within ideas. It can feel like you’ve cracked a code when a whole bunch of relationships fall into place, but it doesn’t behave like a code all the time. It bends and twists, and it shouldn’t really be approached with a logically positive skepticism. More with a sense of the poetic. If this pursuit is about anything, it’s about making the story richer.

The stories in the books don’t necessarily turn out the same way as the stories they reference. But when they are different, there’s usually something interesting about the difference. The myths and stories are often exploded and fragmented across several plot lines in the books and a lot of characters. So they don’t line up one to one.

And sometimes they also imply further information that is not revealed yet. For example, if a given source story relies on one character having a family relationship they don’t appear to have, maybe entertain the possibility that they have this relationship, but it’s not known to the reader (this happens a lot).

Plots to Watch Out For

If I had to parse it out by plotline, I’d say: 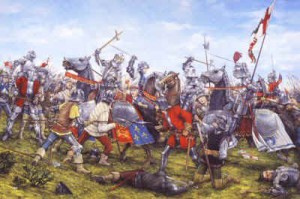 The story of the political intrigue and war between the Starks and the Lannisters is the story of the British War of the Roses, between York and Lancaster. In this light, the Targaryan conquest stands in for the Norman Invasion in 1066, and Daenery’s hope of a Targaryan reconquest as the potential advent Henry Tudor, the last King of England to win the crown on the battlefield. 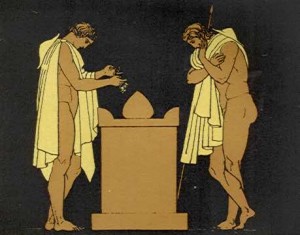 The story of the internal struggles in the Lannister family and of Tyrion specifically is the Orestia. Cersei is the Clytemnestra figure, furious at the sacrifice of her children, murdering her husband the king when he is incapacitated, having an extended affair under his nose, and Tyrion is an Orestes figure, pursued by the Furies and seeking out an Elektra to assist him in final vengeance.

The story of the Night’s Watch battling the Wildlings and attempting to deal with the political situation in the North is the story of King Arthur and the Knights of the Round Table. Perhaps Stannis is an Uther Pendragon figure, as this story only seems to come into its own as he arrives at the wall. King Arthur was a bastard, and the best-known historian to write about Uther Pendragon was named Geoffrey, another name kicking around the series somewhat dissociated from its source, but still part of the vocabulary.

The story of the ultimate fate of the world, and of the Stark siblings, with the ice monsters coming from one side, and the dragons coming from the other side, and R’hllor the fire god, and the giant magical tree at the ends of the Earth with the one-eyed god who commands Ravens, is the story of the Ragnarok from Norse mythology. There’s tons of evidence of these stories kicking around in the background, but perhaps the clearest, other than Hodor (“Hodor.”), is that the name of the Norse source George R. R. Martin most likely used is the Prose Edda, and of course the first protagonist of the series is named Eddard.

The Problem with Predictions

It’s fun and popular to use literary references to make predictions about the plot of the story, and I encourage you to try it (I really like doing it). But remember that being influenced by an artist is also a process of hoping to surpass and destroy an artist. And George R. R. Martin loves to alternatively embrace and defy genre and precedent. So don’t be surprised if your analysis leads you to think events will proceed a certain way, and then he pulls the rug out from under you.

He does love doing that, as much as we love having it done to us.

Have at it: share your own thoughts on the mytho-historic referents of Game of Thrones and Song of Ice and Fire in the comments. But remember: mark spoilers clearly for events beyond the most recently-aired television episode and the corresponding point in the books, and please mark as spoilers things from the books that don’t happen in the series, but might reveal something viewers don’t know.

9 Comments on “Myth, History and Game of Thrones”