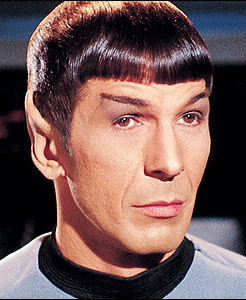 One little-known fact about the Overthinking It crew: in the small 5th-floor walk-up apartment a couple of us shared and more of us passed through in the early aughts, one of our more transfixing and confounding possessions was a copy of Shekhina, a coffee table book by Leonard Nimoy, featuring his spiritual insights and photography, as inspired by the concept of the feminine divine in the Kabbalah.

It was transfixing in its daring solemnity and sexuality, and also by how fully it expressed a very specific taste in all things: love, sex, death, all of it had this exotic, powerful stillness and languid conviction. It was confounding because it was full of pictures of naked women, and thus had to be kept on the shelf under the coffee table, rather than on top of it.

It was the most Leonard Nimoy thing I’ve ever seen.

Today we found out that Mr. Spock, or, rather, the man who gave him life, has died. And though we may hope that past the impassible seals that bind the radiating energy of our own Star Trek II existence, there might be some Star Trek III for us on some distant shore, in some undiscovered country — though we may search for Spock, we won’t find him again in our lifetimes.

Like our half-forbidden Shekhina book, Nimoy as a cultural icon was above all a psychosexual presence, and for the time that he was with us in the sun, he found a firm place to stand in ground that is notoriously slippery.

The son of an Orthodox Jewish Ukranian immigrant barber, growing up in Mattapan (a part of Boston not particularly known for birthing interstellar science officers), he started theater as a small child, before he lived in a home where people spoke English as a first language. But then he went on to the Army, serving alongside Frank Gehry and Ken Berry, the former going on to become a great architect, and the latter a great sitcom actor, who was supposed to star in the never-made interracial spin-off to The Brady Bunch.

If you want to narrativize these sorts of things (and how else do we get through the day?) you can see in Nimoy’s eclectic upbringing the invention of his masculinity, disinterested in hewing closely to the order of the day, but powerful in its expressive presence. In his worldview where the sacred, the pleasurable, and the proper all shared the same spiritual space, we might also find his model for adulthood – a model that, merely by the living of it in the public sphere, he inspired to various degrees several different major movements in ideas of human sexuality and personal development.

Just based off the conversations many of us have every day, it is difficult to overestimate how important Leonard Nimoy’s self-assured strangeness, his utterly belonging other, turned out to be in the way we talk and think about ourselves. Right now the Texas government is trying to work out some sort of crackdown on trans-friendly unisex bathroom regulations in Austin, and looking back through the decades on what got people on board with using popular culture as an avenue for empowerment and a source of vocabulary for gender transformation, I personally find it difficult to overestimate the importance of Kirk/Spock.

In a world with Nimoy in it, 50 Shades of Grey is much more tolerable, if you understand its lineage – the harmony it strikes, as a post-fanfic, from a latter-day fandom, of a mature and much-trod genre, with what came before. We will see what happens in a world without him.

While of course Shatner’s own personal energy, his own novel masculinity, his own ability to wrassle emotions and show every bead of sweat on his brow while doing so – all that contibuted to this as well, really Nimoy is the more sophisticated psychosexual presence. Particularly if you read his later work, look at his photography, even read his tweets, you see a wisdom that manages to do what so few of us ever manage to keep doing for very long – to think and say the things that seem deeply true to us, even when they require us to be unconventional, even when we do not or cannot mantle ourselves in the aggrandizement of the self-conscious rebel.

That all said, one of the really powerful things about Leonard Nimoy is how much of what he accomplished in the minds of the public he did merely by his craft, and by his art. How it’s acting, really – the powerful act of embodying a thing or non-thing or an idea or whatever that is – channeling that and embodying it in yourself in the context of a story – how Leonard Nimoy’s living in himself, even with pointy ears on, was such a daring thing to do that inspired so many. And then how he carried his artistry across media – probably the best director to come out of the Star Trek casts (especially if you like his movie 3 Men and a Baby; talk about psychosexual icons!).

This brings us to the even bigger portion of his legacy, which is also the less interesting to academic circles, and thus the less codified and understood — which is that just as Leonard Nimoy’s psychosexual exoticism was inspiring grown women with forbidden fantasies to expand and share their notions of gender roles, he was also connecting that whole time with generations of young people, who then became older people and brought new, younger people, who connected with him in ways that weren’t forbidden at all among each other — even though they sometimes had to be kept under the coffee table to avoid cafeteria harassment.

Leonard Nimoy is the psychosexual saint of the modern nerd. Star Trek and the subsequent efforts to recapture whatever it was it was doing so well have formed multiple entire genres of culture — there are thousands of “variations on Spock” across all sorts of culture in much the same way Western philosophy can be said to be variations on Plato.

Spock’s self-assuredness, his ways of navigating the paradox of being born into foreign-ness, how he understood and expressed his internal conflict – it’s all an apotheosis on awkwardness. It’s how the most socially inept and incapable person in the room can also be the most beloved, and the most loving, and the strongest; about how the awkward duckling can hope to grow into the Spocky Swan. It’s about the irony of isolation — how love and want are so deeply connected, such as the one who needs most desperately for lack of love can find in that need the font of the very thing he may be missing.

Looking at this scene again, I can think only of how powerfully it demonstrates what it means to be searching, somehow, for someone to like and understand, who might like and understand you, and also the sublime joy in finding it, even if it’s through knowing what a nacelle is or cracking a pack of Magic cards.

And it brings to reality a thing many people might wrongly doubt – the incredible power of costume, of the trappings of fantasy genre, of little changes that might seem incredibly trivial, but for the people who know, it can bring them so much closer to things that can seem so easy for some, and so hard for others.

It is no small tribute to the man’s legacy that he made those ears work. And every ear as such that has ever worked is part of the Nimoy-ness.

Yes, Star Trek was the work of many people, and the growth and tending of the love of Star Trek is the work of many more, but the specific power Nimoy brought to the mythos; to me, that’s primary. A Prime Directive, if you will. Although an inverse one, that comes with a license to interfere – a compulsion to land your away team – provided it is done with your own strangeness worn on your face, and in sensitive awareness of your emotional limits and self-possession. And of your strength.

Subsequent Star Treks have never recaptured the full intensity that Nimoy brought to the original series, and perhaps that might not have survived it. Patrick Stewart achieved it sometimes. Christopher Plummer grasped it for but a moment in a photon fireball in Star Trek VI. Some parts of Firefly can get close sometimes (because what are all these other shows except “subsequent Star Treks?“).

But in the portayal of these fictional people on these recordings that we watch now after decades of re-recording and preservation that have come to mean so much. In those distant projections, nobody really lives as much in the pictures and sounds.

And he did it for a long time.