(Spoilers for The Interview and Team America: World Police.) 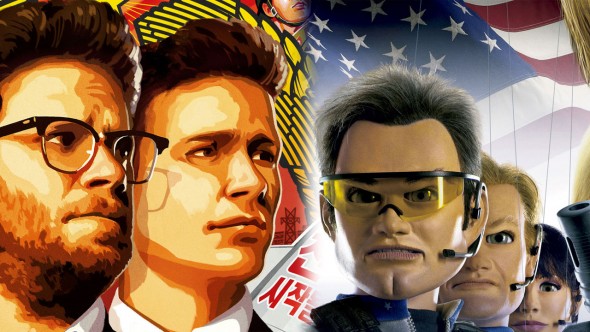 The Interview is often compared to Team America: World Police in that both movies are satirical comedies pitting Americans against a North Korean head of state. For the most part, the similarities end there: these are two very different movies in terms of style and the broader context into which they were released. But both movies have the same purpose at their core: addressing America’s collective anxiety over its ability to keep itself safe by exerting influence overseas. Which leads us to the most important difference between these two movies: their competing visions for how to address this anxiety.

Team America gives us its manifesto in no uncertain terms: “dicks fuck assholes.”(Video is NSFW:)

In less crude terms: American state-sponsored violence is critical to maintaining world order and fighting evil (“dicks fuck assholes”). At times, the application of this force is inappropriate or excessive, but it’s ultimately a necessary price to pay and far preferable to the alternative of naïve pacifism as embodied by the Film Actor’s Guild (“pussies”).

The Interview, on the other hand, is a little less clear on its prescription for this anxiety, but it ultimately lands on the power and influence of American mass media over the use of violence to project American power in the world. The CIA’s original plan is for talk show host David Skylark to poison Kim prior to the interview. Kim would die after the Americans had left the country, which would trigger a coup d’état in the North Korean government. But the Americans and their North Korean collaborator decide that a better plan to break the regime would be to humiliate Kim on live television so all North Koreans could see that he wasn’t the god he claimed to be. Skylark breaks Kim by singing his favorite song, Katy Perry’s “Firework,” after weakening him with reminders of his severe daddy issues.

The difference between these two movies boils down to how they suggest America advances its interests abroad: “hard power” versus “soft power.” “Hard power” refers to influencing nations through economic or military coercion; e.g., Team America killing terrorists, the CIA assassinating Kim Jong Un. “Soft power” refers to attracting and co-opting nations through diplomacy and culture; e.g., actors and music with worldwide appeal. In Team America, a hard power approach (“dicks fuck assholes”) wins out over a soft power approach (the Film Actor’s Guild negotiations with Kim Jong Il). In The Interview, a soft(er) power approach (the music of Katy Perry, American-style mass media) wins out over a hard power approach (assassinating a head of state, though they eventually do so, to the movie’s detriment). 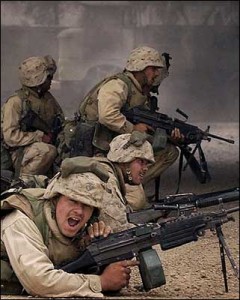 I don’t think that The Interview intentionally set out to contrast itself with Team America in this way, but it does so at an interesting time in American history. In 2004, when Team America hit theaters, the application of hard power was in full effect. At the time, just three years after 9/11, few would have opposed the idea of a “war on terror,” even while there was widespread disagreement over whether invading Iraq was a legitimate component of that war. In 2014, looking back on ten years of applying hard power in the Middle East, we’re painfully aware of both its high cost and its limitations. The wars in Iraq and Afghanistan have cost thousands of American lives and over $1.5 trillion. Although Bin Laden’s death was both a symbolic as well as substantive victory over Al Qaeda, the drone assassination campaign against other jihadists may only be succeeding in breeding resentment against America and creating more jihadists than are killed in the attacks. Since 2006, both Kim Jong Il and Kim Jong Un have advanced North Korea’s nuclear weapons program and conducted three nuclear tests in spite of international sanctions and the implicit threat of American military attacks. 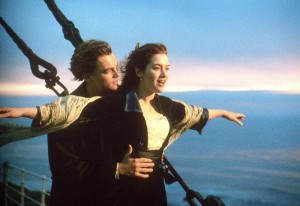 The effectiveness of American soft power during this time is harder to evaluate. American pop culture has dominated the globe for most of the 20th century and continues to dominate in the 21st. I can’t point to a regime that’s been toppled or an alliance that’s been formed thanks to American pop culture. But in the months leading up to the release of The Interview, The Guardian published the story of a  North Korean defector that gives powerful anecdotal evidence of the effectiveness of soft power:

…It wasn’t just exposure to free trade that opened [a defector’s] eyes to the limits of life in North Korea. It was foreign films, and most of all, a pirate copy of the 1997 Hollywood epic Titanic…“Everything in North Korea was about the leader, all the books, music and TV,” she said. “So what was shocking to me about Titanic was that the guy gave his life for the woman and not for his country – I just couldn’t understand that mindset.” 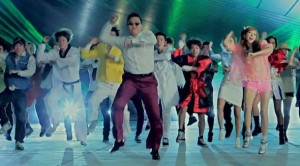 A force for world peace.

Another soft power anecdote comes not from America, but from North Korea’s primary adversary and one of the leading practitioners of soft power in the 21st century: South Korea. The government of South Korea has made it official policy to support is cultural exports such as soap operas and K-Pop across the world. The Secretary General of the UN even went so far as to declare “Gangnam Style” a “force for world peace.” Again, I’m not aware of any peace treaty signing ceremonies that were inspired by Psy’s infectious beats and horsey dance (yet), but I cite these South Korean examples as evidence that soft power isn’t just a nice theory: it’s a legitimate strategy for extending a nation’s influence abroad.

As you’ve probably guessed by now, I’m more sympathetic to the soft(er) power advocated by The Interview than I am to the hard power advocated by Team America. I mean, yes, we do need dicks to fuck assholes every once in a while, but over the last ten years, dicks have probably done more than their fair share of fucking. At the same time, promoting soft power isn’t tantamount to being a “pussy.” It’s just using a different set of strengths to effect change through hope and entertainment rather than fear and death.

All that being said, I do still prefer Team America over The Interview for both its entertainment and satirical elements. Team America: World Police presents a more consistent case for hard power than The Interview does for soft power. In 2004, Team America gave mindless patriotism the thorough dismantling that it desperately needed after three years of relentless flag-waving. Its “dick fuck assholes” advocacy of hard power is less appealing now, after twelve years of war, than it was in 2004, but as a piece of clever, filthy rhetoric, that speech is still a classic, and far better than anything uttered in The Interview.

The Interview, on the other hand, can’t quite seem to make up its mind over how good of an idea it is for America to attempt regime change in North Korea, whether through assassination or through mass media. Most crucially, it chooses to kill Kim Jong Un in the end, rather than play out the idea of soft power to its logical conclusion: if he loves Katy Perry and “Firework” so much, and if American culture is so great, then he should have found some sort of true redemption through it, rather than be provoked into a murderous rage by it.

In other words, he should have been given his chance to “just own the night, like the Fourth of July.”

The Fourth of July, indeed. Or rather, fuck yeah.

3 Comments on “Hard and Soft Power in Pyongyang: The Foreign Policy of “The Interview” and “Team America: World Police””