Parallel universes are a venerable tradition in science fiction and fantasy. And they are super-enticing for an author: Look how easy it is to create any desired setting! Want to visit a world where Napoleon won? Or where your father never met your mother? Just go and find it; it’s out there somewhere.

Of course, parallel universes are real in one of the standard understandings of quantum mechanics: the Many Worlds Interpretation, developed by Hugh Everitt in 1957. Not all physicists accept it, or even most, but it is popular with cosmologists and some others.

Quantum mechanics requires probability “wave functions” (as in the famous Schrödinger’s Cat). An electron – or a cat – has a certain probability of being here and another probability of being there. Not only that, the different possibilities actually interact with each other, yielding things like interference patterns.

But what does that mean? How can they both be real? If you had perfect information, wouldn’t it have to be one or the other? According to the Many Worlds Interpretation, the answer to that last question is an unequivocal Yes. In the universe in which we live, that cat is either dead or alive, not both. But there are multiple parallel universes, identical except for one thing: in one, the cat is alive, and in another it is dead. And we can’t know which universe we’re in unless we go and actually examine the cat’s status. These different universes can interact, which gives rise to quantum interference effects, but not very much. The nearer to identical they are the more they can interact.

Look, don’t blame me – quantum mechanics is hard to understand. But in this interpretation, all of us are constantly giving rise to parallel universes in which the only thing that varies is what happened to us. Whether someone can actually travel between these universes is a separate question, one that we should perhaps leave to authors of parallel universe fantasies.

One such fantasy that is not so commonly recognized is one of the funniest and most moving horror movies I’ve ever seen: Groundhog Day (1993), starring Bill Murray and Andie MacDowell.

The plot, in brief: Phil Connors finds himself in a small town, reliving the exact same day, over and over. He always wakes up in the same position, the same physical condition. Thoughout his day, everyone else behaves exactly the same as long as he does. If he acts differently, they will too. Over time, he gathers memories of the previous days. Whatever he does, even if he kills himself, he still wakes up fine the next day.

He uses his situation in various ways. He learns details about women he desires, and practices lines on them day after day till he finds the ones that work just right. He becomes a star pianist, ice sculptor, playing-card tosser, and expert in French poetry, by taking one lesson a day – presumably for years. And eventually, he redeems himself; he learns how to live “his day” to help others and win the woman he loves, and is freed to live the rest of his life.

The movie does not, of course, explain how all this works. He seems to be in some sort of time loop, looping back to 6 am of that day, reverting his body to the way it was before. His consciousness went back into the earlier body, whatever that means, as he relived the day. I think that is how most people understand it – I think that’s how Phil understood it. But it sure doesn’t make much sense. The whole world keeps repeating? 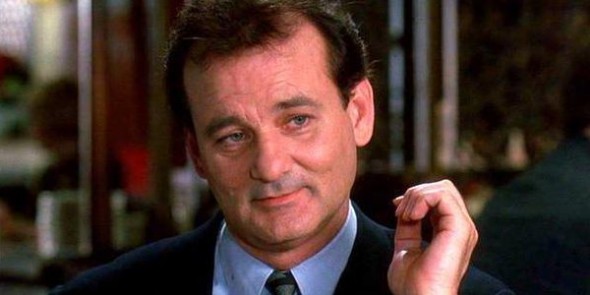 The simplest way to understand the story is with the Many Worlds Interpretation. Phil is simultaneously living out many possible outcomes of his day – the same as the rest of us. We all do that! The only difference is, for some reason some of those possibilities begin the day with Phil having access to his memories from one of the other days. Pass 1 had no special memories. On Pass 2 Day he woke with memories of Pass 1 (that’s the only reason I called it Pass 2; otherwise it’s just one more of infinitely many versions). On Pass 3 Day he also woke with memories of just one other day, Pass 2: but that of course includes memories of Pass 1 as well. And so on. For Pass one zillion he has access to a remarkable collection of memories and abilities, a virtual superman, who can ice sculpt, play piano, and speak French.

Phil seems to be experiencing the same day multiple times, but he isn’t. He is actually not in a loop at all. Each and every one of “his days” ends with tomorrow – same as the rest of us. He always gets up the day after Groundhog day, and goes on with his life. And the rest of the world isn’t involved at all. No time loop is needed, just this “leakage” of memory (across time and universes). Unusual and unlikely, but, as I said, universes that are almost identical are able to interact more in the Many Worlds Interpretation.

Now, why do I call it a horror story? Because poor Phil Connors made a terrible error in the movie. He thinks he’s in a loop – he’s not. He thinks there are no consequences to anything he does – he is fatally wrong. Each day the next morning, he finds himself still in jail for grand larceny, falsely betrothed to some wronged girl, seriously injured, or dead. Each time he will think he has “finally escaped” the loop, when really he was never in one at all. His memories have led him astray. 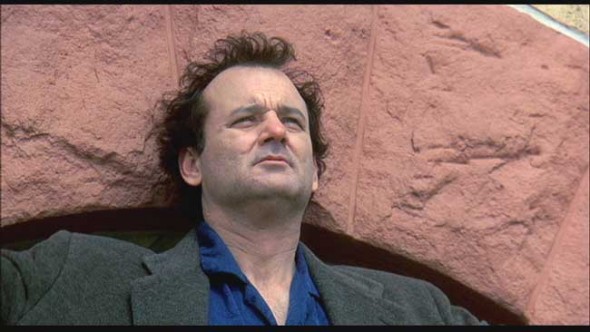 Each time I watch it, I shout at the screen in frustration: “No! Don’t do it! You’ll really be dead.” It never helps, he never listens. Like the old man Phil repeatedly tried to resuscitate, those Phils can’t be saved.

The movie picked an ending where Phil had just gotten his day together in an ideal way. But that was a trick. Actually, Phil has infinitely many endings, just like the rest of us. Many of them are sad, and many more pretty boring. There are versions where he is very annoyed: He remembers finally winning the girl of his dreams, but has no way to marry her. He wakes up back at the beginning again, after his perfect day, hundreds or thousands more times. Where does he go from there?

Perhaps he should study quantum physics next. The story would change a lot if he understood the Many Worlds interpretation; he would behave very differently. Now he would realize that he isn’t trapped in that day; though he has memories of the day thousands of times over, he now knows that he will himself only live the day once. He will certainly not do anything rash. And even if he has nothing at all new to do, and has memories of doing nothing new for the last million days, I don’t see why it should bother him that much. He can stick it out for just one day! In fact, he has to decide – he will only get one chance at this day. Which of all the days in his memories is the one he’d prefer to live?

Of course, if he wants to marry Rita, he has only one choice: He must exactly repeat the final Perfect Day so he can marry her tomorrow. I can see that he could get awfully sick of that after a while. He could still introduce a little bit of variation: for instance, he definitely doesn’t need to catch that ungrateful kid who fell out of the tree. 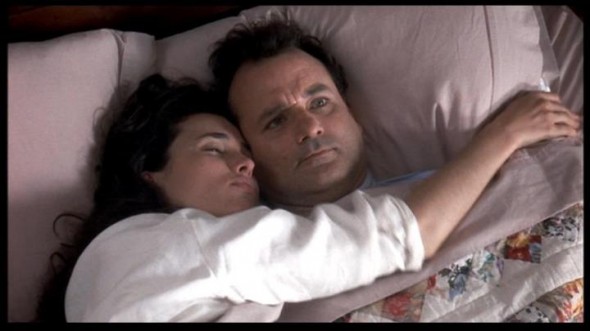 Now go back to earlier in the story, before he’s done everything. If he understood his situation properly, would he feel a sense of responsibility for tomorrow’s Phil (a different person) to bother to go to his piano lesson? He himself will probably never learn to play very well. Will he even bother to learn that girl’s name and high school English teacher so that the next Phil can make time with her?

Kind of eerie for him, lying down to sleep, knowing that he himself will wake up tomorrow and go on with his life. Someone else will carry on the story.

My son suggested the following in an email: “Eventually, he has to run out of things to do. The story doesn’t seem to account for the internet, and the only road out of town is closed, so he can only do whatever is within a day’s walking distance in every direction. If we accept your hypothesis of worlds without end, eventually he will read every book, try every food, learn every skill, meet every person, and try every crazy thing he can think of, and he will still keep on waking up every single morning to “I Got You Babe”.”

Maybe. If this eventually drives him insane, he might stay that way for all later iterations. But what if he finds a class on creative writing; or poetry? That must also be finite, but it’d keep him going for a while. I feel kind of bad for the guy, though: Even if he can compose wondrous symphonies and brilliant novels, he has no way to write them down for anyone else; it all would go nowhere but his own memory. He can’t play them all for the people in town in one day.

It’s not so bad, though: each version of Phil does “escape” the nonexistent loop and go on with his life, and then he can begin writing them all up and publishing them. If there aren’t too many! If he isn’t a complete hack. Pity the world when Phil returns to it, all ready to publish thousands of really bad novels.