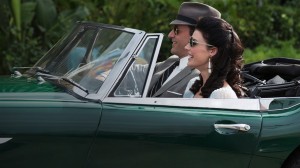 Mad Men’s season 7 premiere, “Time Zones”, is about people in search of the real. Yes, every episode of Mad Men has been about that, in the sense that every Shakespeare play is about how parents just don’t understand, but it’s more explicit now. America has just survived 1968, a year so tumultuous that it made Nixon viable, and is surveying the wreckage for beauty, or at least for survivors.

Los Angeles has a lot to offer, at least if Pete Campbell’s warm greeting to Don Draper is any indication, but everyone who moves out there craves the world they left. Pete insists that east LA’s Brooklyn Avenue is just enough New York to carry west but still kvetches about the bagels. Ted Chaough orders two dozen bagels to bring back to L.A., though that’s not the part of New York he likely misses.

The episode is also replete with false faces: people acting on behalf of, or in the stead of, someone else. Joan takes charge of the Butler account, substituting herself for Ken Cosgrove when Ken’s too frazzled to cope. By doing so, she heads off a potential lost client, though it takes quick thinking and creative brainstorming on her part.

Peggy Olson isn’t the creative director at SCP, but she acts like it when newcomer Lou Avery is only interested in passing along a minimal satisfactory effort. She’s ready to reconvene another creative meeting, fighting for “Freddie”‘s suggestion, until Stan Rizzo cools her down. Ironically, this false face is a necessary tool in Peggy’s search for the real: her Nietszchean desire to do the best work she can for the sheer joy of it.

Don, whose entire post-war career has been a lie, wears the falsest face of all this episode: the “Cyrano act,” as Freddie Rumsen aptly puts it. If Peggy’s creative drive is a bit extreme, Don’s is inconceivable: getting paid a director’s salary to stay out of the office, he does freelance copywriting and lets Freddie take the credit. It’s a complete inversion of “That’s what the money’s for!” in “The Suitcase” (Season 4, Episode 7): he’s receiving neither money nor thanks for his work.

But Don has to do it because, if he doesn’t, he literally has nothing else in his life. His wife lives three time zones away. His children live with their mother. And he’s too scared of liquor at this point to let himself sink back into that hole—note the unopened bottle of whiskey that he considers, then puts aside.

Don is a man who believes, since the series premiere, that a well-crafted ad campaign can fill the void in one’s soul that normally requires love. The last six seasons have chipped away at that belief, though, to the point that his face nearly collapses as a stranger on a plane talks about her deceased husband. “Your wife woudn’t like this”, she says, and it’s hard to say what’s a greater betrayal: their innocuous cuddling and brief consideration of an affair, or the emotional vulnerability they share with each other. That’s the sort of psychic intimacy normally reserved for man and wife, and yet Megan still thinks Don’s going into the office. 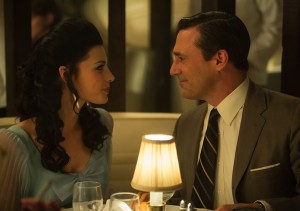 The real—the true, the vulnerable, the unguarded—is so scary that we need to receive it through an intermediary. Hence the suggestion of Christian communion, an intermediary for encountering divinity, in a mother handing popsicles to her children (“The Mountain King,” Season 2, Episode 12); hence the talk of home with Oscar Mayer. We’re scared to tell people that we want Mommy and Daddy, but we’re fine buying products that remind us of them, and thereby temporarily quiet that urge.

L.A., the orbital center of “Time Zones,” represents the fictional paradise, the Shangri-La that Don flips past when watching Lost Horizon on Megan’s tiny TV. It has everything New York has to offer, plus balmy weather in January! But it’s that sun-bleached warmth that lets Don know it’s an illusion. He craves the cold, as the depressing final shot reminds us, because that’s what lets him know it’s real.