Aside from being a really solid comedy of the sort you’d expect given that it stars Seth Rogen (Parental Advisory: contains coarse language, adult subject matter, drug use), as well as a genuinely decent horror movie in the well-trodden Apocalypse subgenre, its main gimmick is that all of its stars – even the minor players who die very early in the first act – are playing themselves. This is a movie about what a bunch of celebrities would do if the end of the world happened. And as such, the writers and actors take the opportunity to send themselves up, parodying themselves either as exaggerated caricatures of their own reputations (for instance, James Franco has a blast playing himself as the most pretentious hipster douchebag you can imagine) or totally against type (Michael Cera, typically known for playing sweet, effeminate milquetoasts is here “really” a coke-snorting, whore-banging bully). 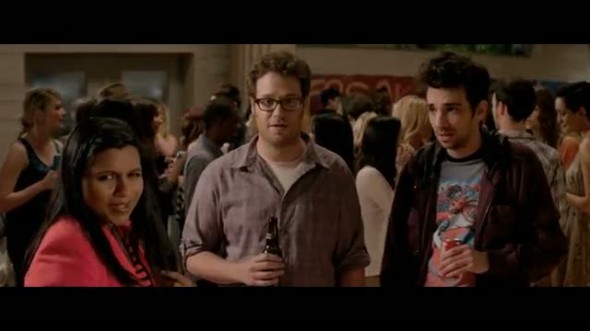 Mindy “If I don’t %@#& Michael Cera tonight I’m going to blow my brains out” Kaling, with Seth Rogen and Jay Baruchel

And this is funny, of course, but it also ties into the movie’s more serious themes: what makes a good person? What’s worth dying for? It takes on the topic of celebrity culture, but in a very meta way that wraps itself in layer upon layer of distance from reality, and thereby ends up getting much closer to the truth than it might otherwise have done.

We don’t think of celebrities as real people; in part this is just because the machinery of media disables our ability to relate to celebrities the way that we relate to people that we actually know in real life. We’re familiar with them only through the personae that they present to the world, and most of that is by how they pretend to be fictional characters onscreen. Celebrities themselves exert varying levels of effort in their attempts for non-celebrities to see them as real people rather than shiny movie stars without any feelings, but there is also an enormous and parasitic industry that trades in making celebrities seem to be the worst people in the world – or at least worse than most of us regular people like to think that we are. Because we are intimidated by the fame of people whom we may or may not believe deserve to be as successful as they are, tabloids and so on make billions of dollars by catering to our desire to believe that celebrities are in fact worse than regular people, in order to make us feel better about ourselves and our relative obscurity.

This is why celebrity self-parody is generally so well-received. When an actor plays him or herself in a mocking way, it appeals to our schadenfreude, validating our desire to feel superior to those people who are much more rich and famous than we will ever be. So when Wil Wheaton plays Evil Wil Wheaton on The Big Bang Theory, or when Adam West plays Completely Insane Mayor Adam West on Family Guy, it’s funny because these people with whom we’re all familiar mostly for their portrayals of other people are now portraying their “real” selves, and they are awful. They go beyond being “just regular people.” They become practically cartoons – and in many cases, literally cartoons. 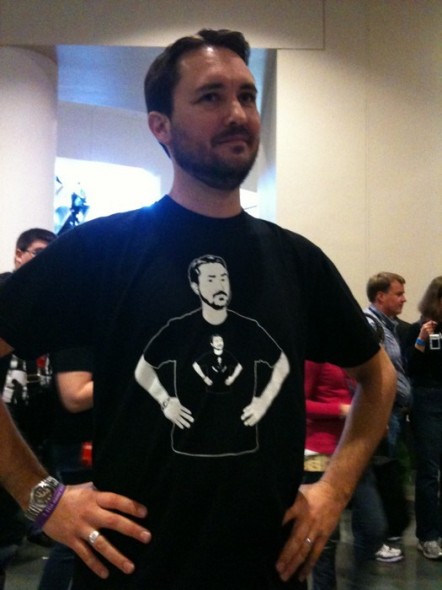 This is the End, though, takes this much further, delving deep into the meta. The film deliberately takes a page from the Charlie Kaufman handbook when it intermingles the real and the fictional in a comedically confusing way – more in the mold of Being John Malkovich than the much more self-consuming Adaptation, because, while Adaptation gets more metafictional mileage out of the conceit than Malkovich, most of the “real” people in Adaptation are not famous in the same way that the actors in This is the End are famous (being generally behind-the-camera type of people whose faces we likely wouldn’t recognize), and are mostly played by actors rather than the people themselves. The exceptions being, again, John Malkovich briefly reprising his role as himself, and Katherine Keener playing herself playing her character from Malkovich.

In This is the End, the self-mocking self-portrayals do a lot of the narrative legwork in addition to being jokes at their own expense. In the movie’s first act, where normally we would have to spend a certain amount of time introducing the characters and trying to make the audience care about them, a lot of the work has already been done before anyone even walks into the theatre or presses play on the DVD or the Netflix or whatever the hell you kids use to watch movies these days. We’re already invested in the characters because they are, in a sense, people we know. This is a really clever storytelling shortcut and it’s deployed extremely effectively. So that when James Franco “reveals himself” to be the arrogant creep that we expect/want him to be, or when Michael Cera “in reality” is the exact opposite of how he appears, or when Jonah Hill starts out as the total sweetie we think he is only to end up as a total buttwipe, we’re instantly contextualized thanks to the wealth of paratext that we can’t help but bring to our experience of the movie. This technique also subverts one of the greatest weaknesses of many horror movies: it forces the characters’ deaths to be meaningful. Most of Hollywood loses their lives in the first act catastrophe, and we watch as everyone from Mindy Kaling to Aziz Ansari to Rihanna are literally sucked into Hell. This is shocking in a way that most “a whole lot of people die” scenes in disaster movies aren’t; in most disaster movies, we don’t know any of those people, no movie can spend time making us care about every single character who loses their life in a mass-killing scene. Our shock or grief are mostly abstract. But in This is the End – holy crap, Paul Rudd just died! It’s clearly more serious than any old anonymous person falling into a bottomless pit. It was someone we know! It was someone famous!

Beyond even that, the actors’ self-mocking portrayals have a deeper, possibly more subtle effect. On the surface level, as we’ve discussed, actors playing themselves as jerks is funny. But the secondary effect of that is that we’re more inclined to be positively disposed to actors who play themselves as jerks, because we now know that they’re in on the joke too. They’re not above making fun of themselves, they’re not “too good” to make themselves look bad as themselves. That humanizes them too. While we get pleasure from seeing our heroes taken down a notch, we also feel closer to them if they’re willing to consciously and deliberately make themselves appear foolish and trashy for our amusement. Their self-aware assassination of their own character makes us like them more; paradoxically, pretending to be terrible makes us more likely to think that they’re actually nice. Not that the character they’re playing is actually nice deep down, but that the real person is someone who doesn’t take themselves too seriously, who doesn’t think that they’re better than we are in direct proportion with the extent to which their caricature does consider themselves above the ticket-buyers.

However, This is the End makes the metacharacterization even more multidimensional than that; the whole plot of the movie hinges on the well-known “fact” that celebrities are almost unanimously immoral, promiscuous, drug-addled reprobates. When God finally brings His wrath down on humanity, all of the good people are saved and all of the bad people are cast into the pit. Once most of Hollywood is dispensed with early on and our familiar group of survivors remain, we know that they have not been numbered among the righteous (because they haven’t ascended to heaven in a beam of blue light), but they are still alive, so there must still be hope for them to reform and earn their salvation. When they figure out that fact, they must then make the decision to become good people. The trick, of course, is that if they are only doing it so they can make it to heaven, they’re still being selfish and therefore will actually get sent to hell. They have to become good people for real.

What we have here is actually a very complicated, deeply layered metanarrative that nevertheless operates on the surface of the story; sort of a hologram like what some scientists think that the universe itself actually is. Everything is encoded in two dimensions, but the information that makes it meaningful is perceptible in glorious 3D. We, the audience, have to know who these people are already so that they can unravel our expectations only to reinforce them, so that they can then go on to consciously undermine those characterizations as the spine of the movie’s narrative progress. By making humans into characters, by impersonating themselves as a narrative necessity, the actors in This is the End win redemption by doing the seemingly impossible, the practically alchemical: transmuting celebrities into people. 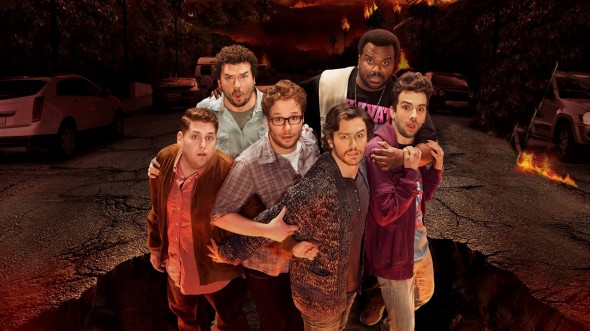