The romantic comedy pulls off an incredible trick: people love it and hate it for the same reason. Predictability makes the rom com divisive. For some movies you quote lines, but for rom coms you quote cliches. The meet-cute in the beginning, the misunderstood phone call at the end of the second act, and the chase at the end aren’t so much plot elements as they are predestined conclusions. Yet even the rom com, the most predictable of genres, has changed dramatically over the past thirty years. That’s because we’ve changed dramatically, too.

We know because we crunched the numbers. We took the top 100 rom coms from 1980 to present (by U.S. gross) and compiled data about the characters’ jobs and salaries. Like romance itself, our study is imperfect and has some lovably neurotic caveats (we encourage you to read our methodology or look at the spreadsheet to learn what they are). Still, we think that the salaries in rom coms reveal how romantic escapism has changed through the decades.

Our graph gestures at what that change is. As the decades progress, male and female characters’ salaries have clustered closer together, and significantly more women have started out-earning their male counterparts. Over the years, our heroes and heroines have found their way to a more equal workforce. 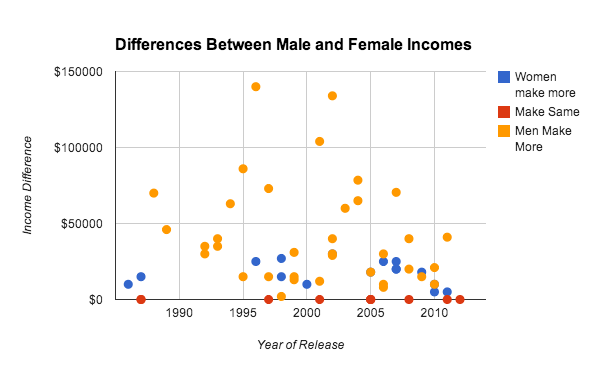 Both male and female jobs have changed. The data show that today’s male protagonists are less likely to be billionaire playboy heroes, captains of industry, or heirs. In turn, the ladies are more likely to be entrepreneurs, businesspeople in their own right, and professionals instead of the waitresses and secretaries that dominated the earlier years of our data. Part of this is a change in society—if rom coms didn’t acknowledge a recognizable shift in the labor force, they’d appear as outdated as if the characters still used rotary phones. The romantic comedy has to have real world texture to make it relatable.

But romantic comedies aren’t just reflections of reality—they’re reflections of our escapist desires. The change in the class relationship between male and female characters isn’t only tied to Bureau of Labor Statistics reports. It’s tied to the fantasies of the studio executives that got the movies made and the audiences that made them popular. Modern studios and audiences have chosen stories with a different dynamic because those stories reflect the modern romance they dream about.

In older romantic comedies, the man made more than the woman and that class relationship was reflected in the subtext of the film. When audiences watched Pretty Woman, they were charmed rather than offended. Vivian Ward gained stability and security through love and Edward Lewis got affection and a relationship apart from work. Many of the rom coms in the 80s and 90s mirrored that arc, and it’s made explicit in the data’s differences between male and female salaries. In general, the man saves the woman through security and the woman saves the man through emotion.

But that began to change in the 2000s. Suddenly, the relationships become more economically equal, and that corresponds with a shift in how the characters love each other. Instead of looking for a savior, each character is looking for a partner. When the women in Fever Pitch, The Proposal, and No Strings Attached search for love, they don’t want someone to rescue them. They need a partner that can breathe life back into their work-driven existence. And the men no longer need to expose themselves to sentimentality—they’re already gushing and desperate for a loving partner, not a damsel in distress. The equality in their salaries is a match for the equal partnership they seek.

Are there exceptions? Of course. Some of the most notable romantic comedies buck the trend, and that’s a great reason to collect a large sample. In general, however, characters’ salaries and dynamics have demonstrably changed. Modern audiences have different things to escape from. We used to escape from uncertainty. Now we escape from monotony. A relationship is less of a rescue effort and more of a team effort. Love is sought as an intoxicant rather than as a salve.

Is that a good or bad change? Was either type of rom com sexist? Does either reflect the values we want in the movies? What’s more romantically desirable or emotionally true? All that’s beyond the scope of this article and the data we’ve collected. Still, we feel comfortable hazarding at least one guess based on the numbers. Rom coms may be predictable, and we may always have that last minute chase to the airport. But despite the cliches, rom coms will keep giving us an escape because even the most predictable genre is willing to change.

Phil Edwards’ writes pop culture trivia like this for Trivia Happy. If restricted to the most traditional rom coms, Music & Lyrics might top his list, but with a little more latitude he’d pick Groundhog Day or Defending Your Life.

16 Comments on “The Evolution of Escapism in Romantic Comedy”