I know that the music video for the Katy Perry song “Roar” is several months old already (which is practically a century when it comes to pop music), but we really need to talk about the significance of the leopard print outfit that features so prominently in the video. 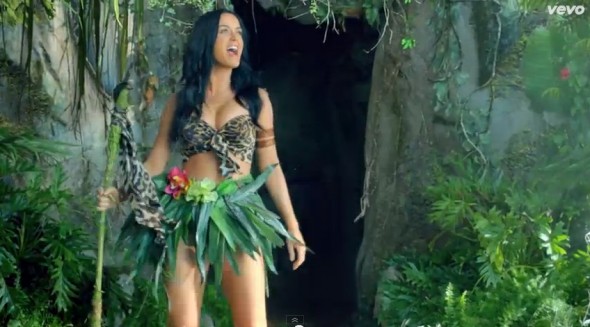 I mean, where did this thing come from? God forbid, did she actually kill a leopard to make this?

I’ll answer that question in a moment, but before we go too far down this road, I want to establish two important parameters for this discussion: first, we have to accept that this jungle contains capuchin monkeys, African elephants, and tigers, even though these animals’ native habitats are actually on three separate continents (South America, Africa, and Asia, respectively). Second, we have to accept the events of the video at face value, not as a dream or a mental episode, as is suggested by the animated bookends and the dream fake-out. Suspend some disbelief, please. This is a Katy Perry music video.

With these two parameters established, let’s figure out just where this leopard print came from, starting at the beginning. 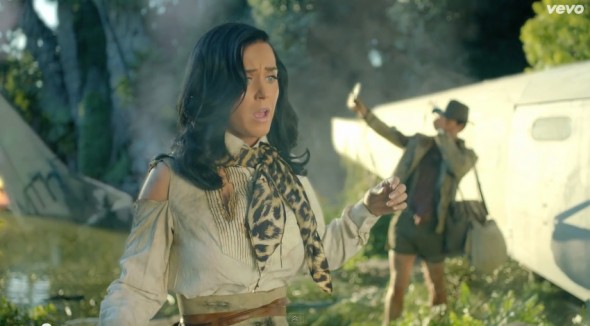 Here we see Katy Perry shortly after her plane crash. She’s just arrived in the jungle, so all she has at this point is what she brought with her from the civilized world. What starts out as a leopard print fabric scarf… 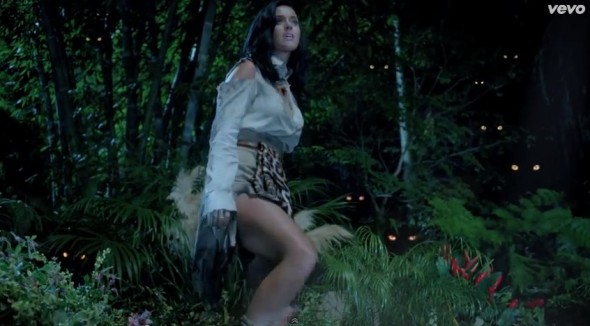 …eventually turns into a belt or waistband. It’s not clear why she needed to tie it around her waist, though. Eventually she repurposes it again to fashion a spear out of a high heel and a tree branch. 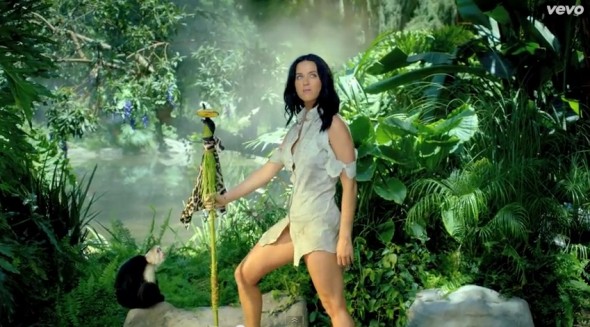 Note that the spear is used to impale a banana, rather than to kill an animal. 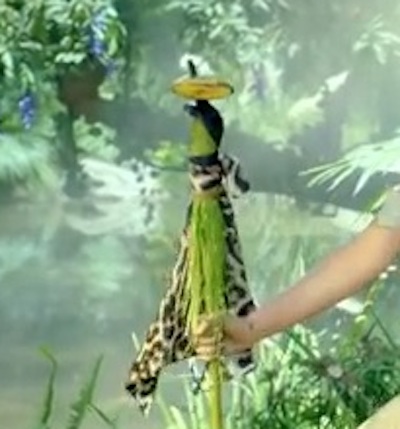 We’ll file that detail away for later. The next time we see the leopard print fabric, it’s still attached to the spear, but now it’s also been fashioned into a sexy top.

Look at the scarf from the first shot and compare it to what’s fastened around the spear tip:

The scarf has only enough fabric to account for the spear tip, not for the halter top as well. This would be ambiguous were it not for this view of the back of her leopard print top, which clearly shows much more fabric than the scarf could possibly contain. 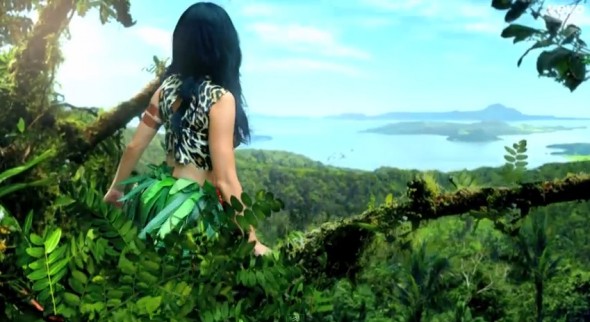 So where did this come from? One possibility that came to mind is that she made it out of additional leopard print fabric that was stored with her luggage. But here’s the problem with this explanation: the sequencing of the video suggests that she enters the cave wearing the ragged remains of her shirt and comes out wearing the leopard print top. 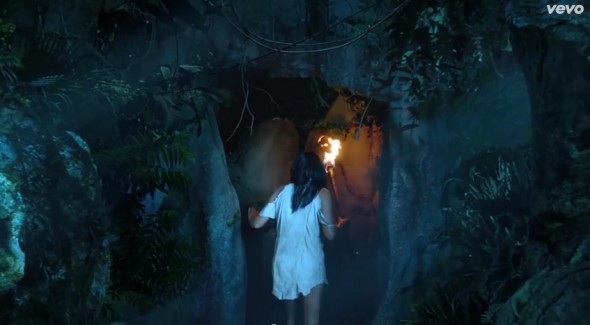 So that leaves us with a more disturbing explanation: did she kill a leopard in the cave and use its skin to make the top?

Not if we take the events of the video at face value. After she enters the cave, she sees an animated cave drawing of a tiger overwhelming its human hunters. 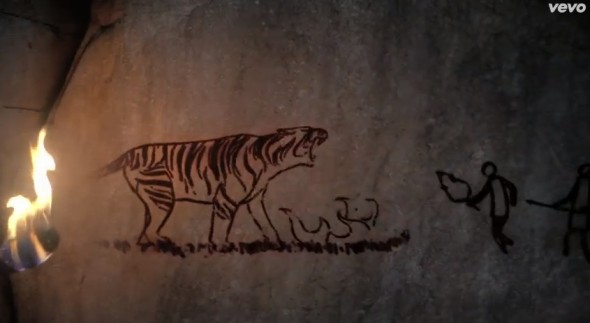 I suppose you could interpret this as Perry’s horribly twisted way of masking her memory of killing the leopard, but man, that’d be dark. And besides, remember what I said about her using the spear for bananas, as opposed to animal flesh. She’s no hunter. So we can probably rule out the leopard skin.

Where the hell did the extra leopard print fabric come from? She didn’t go back to the plane to get it out of her luggage, and she didn’t kill a leopard in the cave. At this point, I turn to the words of my other favorite Top 40 pop sensation, Sherlock Holmes, for some guidance: “When you have eliminated the impossible, whatever remains, no matter how improbable, must be the truth.”

BEAR WITH ME ON THIS.

I know it’s tempting to just say that the magic powers that animate the cave drawing also granted Katy Perry a leopard print top, but nothing that we see in the video–not even the supernatural tiger vs. woman roaring match–suggests that the magic in this jungle can violate the law of conservation of matter. Fabric can’t just materialize out of nowhere. Everything needs to come from something.

More importantly, this explanation is actually thematically consistent with the empowering message of the video. Perry’s transformation from damsel in distress to jungle queen may have been brought about by external circumstances, and maybe even some supernatural aid, but the fundamental strength of her character was inside her all along. Just like the piece of clothing that acts as an outward signifier of her jungle-friendly self. Sure, it’s an awkward signifier–if the leopard pattern isn’t from an actual leopard, then it was silk screened onto fabric in a factory somewhere–but then again, this video isn’t just about finding self-empowerment in nature. It’s also about achieving a balance between the artificial and the natural. Hence the tiger’s Kitty Purry bling. 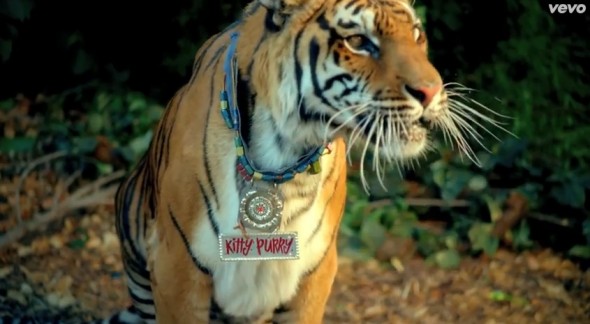 At this point, I think we’ve covered every angle of the leopard print mystery and even explained its thematic significance, which is pretty damn impressive. I’m willing to declare victory at this point, but if any of you can come up with a plausible theory that explains how the capuchin monkey, African elephant, and tiger all wound up in the same jungle, by all means, let me know in the comments. 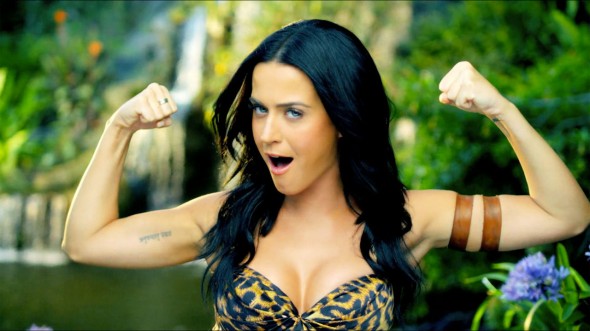 Special thanks to my wife for helping me come up with the final explanation for the leopard print top. She has won her fair share of roaring matches against tigers.