Two shows that don’t get a lot of coverage around these parts have both undergone a reinvention for the 2013-2014 season, worthy of Overthinking. The CBS sitcom How I Met Your Mother is undergoing a quiet Renaissance after 3 or 4 seasons in the wildnerness of sitcom middle-age; perhaps wary of following down that path, Archer preemptively made a wild shift in format in Monday’s game-changing Season 5 premiere. 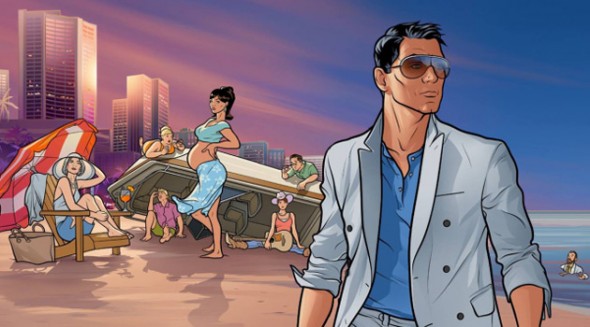 For those not familiar, HIMYM is about Ted Mosby, a Manhattan architect searching for love with his cast of zany friends (it’s more original than it sounds.) The catch is that Ted is the titular “I” in “How I Met Your Mother”, and the entire show is narrated as if it were a story being told to Ted’s (future) children. It’s  a rare CBS sitcom that is unafraid to play with genre conventions, using flashbacks, blink-and-you-miss-them-references and a catalog of in-jokes that make it more than just another soul-less Friends clone.

Archer, on the other hand, is an FX cartoon focusing on Sterling Archer, debonair 007-style spy and perpetual man-child. For four seasons he has worked for the “International Secret Intelligence Service” (ISIS), and the show functions on the insane cast of characters that fill out Archer’s world and ISIS.

Those paragraphs accurately described these two comedies – until this year.

I was an early adopter of HIMYM, forcing my friends and family to watch the Pilot episode and early Season 1 episodes. I have stuck by the show faithfully, but there’s no denying that the show has been in a decline (bordering on freefall) for a number of seasons. Then, in its ninth and final season, How I Met Your Mother made a bold choice – instead of the standard week-to-week format, we learned that an entire 20+ episode season will take place over a single weekend – the wedding of Barney and Robin, where (we are promised) the titular Mother will finally be Met. Though I (and many others) were skeptical at first, I think the experiment has been a success, and shot much needed life into what was otherwise a shadow of its former self. 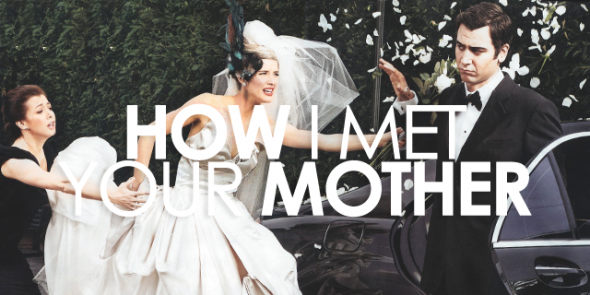 Mild spoilers for the Archer Season 5 premiere below

Over on FX, Archer has been kicking ass and taking names since Day 1, without the traditional “sophomore slump” that so many new shows struggle with. That said, perhaps realizing that such a slump is inevitable if things stay the same, creator Adam Reed made the drastic decision to quite literally blow ISIS HQ up and start from scratch. Instead of an international spy agency, Mallory, Sterling and the gang are now in the drug running (and country music) business.

Above, I used a specific word to describe what’s happening in these two shows – “reinvention.” I want to contrast that with some other words that get thrown around the entertainment industry. The first is of course, the “reboot” – hitting the canonical reset button and recasting all the characters. The second, perhaps more appropriate since we’re talking about TV shows, is the “spinoff.” Neither accurately describes what’s happening on HIMYM or Archer – the creative teams have remained largely the same, as has the cast, so “reboot” doesn’t really seem accurate. “Spinoff” is closer, but that typically takes some small subset of the original show, and sends it off to a new location or new cast to interact with.

What I want to do is explore exactly what’s going on in these reinventions, and what it has to say about the specific genre – comedy – that HIMYM and Archer both inhabit.

The reinvention of HIMYM is perhaps most prominently a change in both time and place. While the first eight seasons of the show portrayed roughly 9-12 months of Teddy Westside’s gang, season 9 takes place over just a couple of days – to the point each episode has begun with a time card, specifying the exact time and day that the episode portrays. While not quite as compressed as an episode of 24, it’s still a bold move to attempt to squeeze 24 episodes out of just 72 hours of plot. Similarly, the “place” of HIMYM largely shifted from Ted’s apartment and the bar to the Farhampton Inn where Robin’s wedding is scheduled to take place.

While we haven’t seen yet the extent to which the new Archer season will deal with time, we know for sure that the place will never be the same – in addition to being confiscated by the FBI, ISIS HQ has literally been blown up. The in-episode “trailer” makes it clear that the Carterl-formerly-known-as-ISIS will be hitting the road and spending Season 5 pretty much anywhere BUT at the ISIS HQ. 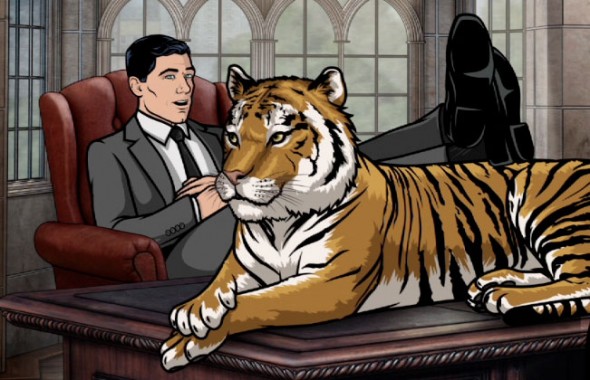 The role of the ocelot will now be played by a tiger.

Archer has, at a stroke, changed its premise almost entirely. Until Monday, if you had asked me what Archer was about, I almost certainly would have used the word “spy” in the first sentence – whatever else it was, it was as story about a spy and a spy agency. All of that is now gone – what we (and Lana) had assumed were quasi-legal activities carried out with the mandate of the US government were in fact just mercenary jobs for hire, frequently causing massive damage and almost never even in the vicinity of “legal.”

The plot change in HIMYM is less stark, but still there – instead of the general story of Ted’s life before he met The Mother, we’re now tightly focused on one specific moment in time. Instead of wondering who the Mother will be and how she will enter into his life, we’re now learning about who the Mother actually  is, and how she will interact with all the other people in Ted’s life. Instead of the story of a guy navigating “the single life,” we now have the story of navigating “the wedding weekend.”

Crucially, for both shows, the end goal of the season is more narrow and focused. The project of Seasons 1-8 of HIMYM and Seasons 1-4 of Archer was, more or less, “watching what happens to these guys.” The projects of seaons 9 and 5 respectively are more narrow: How do Ted and the Mother get together? And how is ISIS going to sell all that cocaine?

In this respect, the shows have barely changed at all – the CHARACTERS of Archer and HIMYM are still there same lovable selves – Marshall is still going to torture Barney with a promise of a slap, and Archer is still going to shout “woo!!” at inappropriate times. 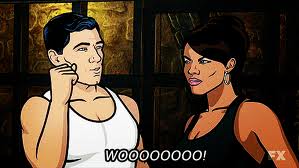 And this is why “reinvention” is more appropriate than either “reboot” or “spin-off.” While the show has changed, the real DNA is in these characters, and the way they interact with each other (and the audience).

By changing up the setting and plot, we get to see the characters in a new light, in new pairings and relationships – what made these shows great in the first place was the characters that we fell in love with. By shaking up the plot and setting, we get “old wine in a new bottle.”

While HIMYM and Archer are very, very different in their tone and execution, they have the same overall goal – comedy. Dan Harmon is the controversial creator of Community, a sitcom that is essentially built around my idea of “reinvention,” and he has a very specific prescription for thinking about the structure of episodic comedy: 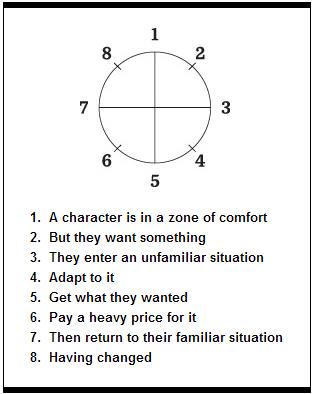 He sees an episode as a cycle, taking characters through a particular series of steps. Crucial to my discussion is #7 – “return to their familiar situation.” This is an all-but ubiquitous feature of episodic comedy – the more things change on a comedy, the more the stay the same. Plot serves primarily as a way to get characters into entertaining situations – any major “arc” or change threatens to upset the foundation of the work. If Kramer is going to keep coming through his front door, Jerry can’t get married and move to the suburbs; Cheers can’t close down and turn into a night club if Norm is going to keep his seat at the bar.

I take issue somewhat with Harmon’s #8 – not that it’s a bad way of making episodic comedy, but rather that it’s simply NOT the way that episodic comedy is normally made. Because of the importance of character, and the delicate interplay of the straight-man/goofy best friend/love interest/boss/rival/etc. in a comedy, characters usually don’t change all that much. The Simpons is the ur-example of this (as it is for the ur-example for all things): no matter how many times he’s been to space, he still has to come back to Evergreen terrace and he still has to be the same old loveable Homer. He can’t learn anything – otherwise he won’t be the same! 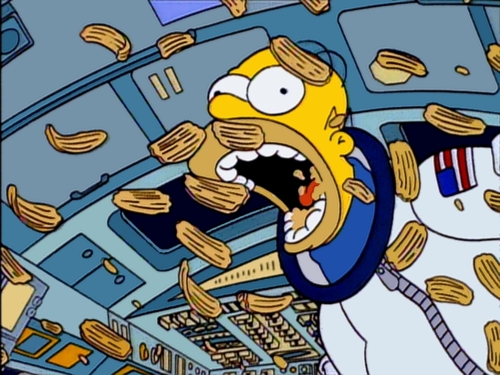 “You’ve never been? Would you like to see my Grammy award?”

Contrast all of that with a serial drama – a Breaking Bad or a Game of Thrones. There, everything is in flux – setting, character, plot are all up for grabs. In comedy, we’re not interested in the journey – we just want to hang out with these fun people for a while. In drama, the journey is what matters – these people are going somewhere, and we want to see how they get there and why they go the way they go. What’s interesting is what changes.

So this makes the “reinvention” in the drama largely unnecessary – we’re along for the ride, and a sudden and jarring change might just throw us out of the moment, obscuring the reasons and motivations behind the sudden change.

Of course, reinvention in drama isn’t impossible – American Horror Story has (more or less) successfully reinvented itself after each season; the incomparable Friday Night Lights went through a major plot shift in Season 4, and The Wire at the very least “refocused” after each season.

My argument, however, is that reinvention is a more potent ingredient in comedy – because the sit-com is so reliant on the “situation” that the characters are in, a major shake-up can yield major dividends for a series that is otherwise running out of ideas.

It’s perhaps no coincidence that both Archer and HIMYM make extensive use of self-referential and self-aware humor – a reinvention like this takes a major force of will, and an audience willing to play along. So far, both experiments have been (for me) successful, and I hope more shows follow their lead and “reinvent” as the ink-well runs dry.

Or read more from… Featured, TV, Archer, How I Met Your Mother, sitcoms, television, the wire

6 Comments on “Archer, How I Met Your Mother, and Comedic Reinvention”