It’s not hard to find in-depth spoilery discussion of Game of Thrones and the Song of Ice and Fire books it’s based on. The following is spoiler-free, and will include no details about the show’s plot or any of the characters. It is all about what this trailer wants us to believe about this season of television.

The first that strikes me about the trailer is the song — particularly the grimy low guitarish thing that this song is doing. Because it’s really close to what this trailer for the new season of Justified is doing:

It even has the same sort of chopped off lyrics about death and violence.

And it’s also really close to what the music in last summer’s trailer for Sons of Anarchy was doing, living on the nexus of country/folk and various metal and electronic genres that end in “core”:

And while the Final Episodes trailer for Breaking Bad was something else entirely, this sort of moody guitar riff is very characteristic of Breaking Bad and appears in a lot of its promos such as this season 5 trailer (which has some Breaking Bad spoilers in it, so beware):

The difference, of course, is that all these other shows, to a greater or lesser degree, are Western derivatives that take place in one sort of American wilderness or another, whether it’s the deserts of the Central Valley for Sons of Anarchy or the Kentucky hill country for Justified.

Game of Thrones is not a Western, it’s a “Westerosern.” It takes place in a fantasy world of sword and sorcery that has little to no resemblance to the United States, where presumably they do not have late-night whisky bars, slow-talkin’ gun fighters and the last exit off the highway ‘fore the end of the road or whatever.

One hopes this music is non-diegetic in season 4. I won’t give away whether there are rambling bad-boy cowboy cops with something to prove in A Feast for Crows.

Why is this fantasy show using music that is derivative of the music used in contemporary cowboy shows? Presumably it is going after the same audience, in terms of age and gender, and presumably it is communicating a similar sort of moral ambiguity, which at this point as been thoroughly commodified.

The song from the Game of Thrones trailer, by the way, is called “Feral Love,” and it’s by “Chelsea Wolfe” — and we can talk more about how unbearably on-the-nose it is as marketing for a cable TV show and marketing for this show specifically in the spoilery article comments.

One thing you may notice about the typeface used in this Game of Thrones trailer is that it appears to either have recently been on fire or to be attending a Bar Mitzvah — in that it is wrapped in plumes of delicate white smoke.

Smoke machine effects have been used reasonably often in Game of Thrones episodes: 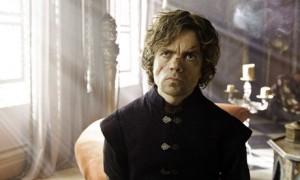 But they are extremely common in Game of Thrones marketing collateral, like this campaign about who was going to sit on the Iron Maiden Throne, apparently: 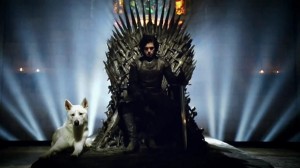 All of these things may be more or less true of the show (discuss in the spoilery comments) — but there does seem to be a general mindspace of what “smoke machine” suggests here.

And in this trailer, the letters themselves are smoking. As if they have just been pulled from the flames in order to tell you when the show is airing before final immolation.

We are raising the stakes people. Conflict/danger/mystery/dance parties! 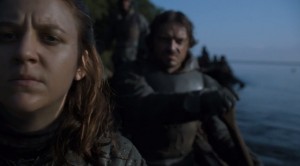 They’re not talking, but you can tell they’re all thinking it.

This trailer is full of worldly, self-satisfied, jaded people setting their naive counterparts straight about the way things are.

Whether they actually put things quite so smugly within the the story, or whether they are being taken out of context to make the show seem more condescending than it is, should be saved for the spoilery discussion in the comments.

But still — let’s look at all the things are we told in this trailer that could be preceded by the words “No, you idiot…”

“…it’s tempting to see your enemies as evil…

“…if the wildlings breach the wall…”

So, nearly everything said in the trailer is self-important smuggery. Which, notably, is also something to associate with even the best Gears of War marketing, especially relative to Gears of War gameplay:

There are a number of shots in the trailer that are code for “This is like a movie! An expensive action movie!” Chief among them is this dude spinning around while he jumps in the air — 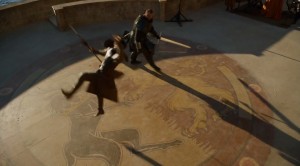 That’s totally a movie-quality move! In particular, it is the kind of move they heighten to at the climax of big movie fight scenes, because they’ve done everything else they can think of, and just having a guy spin around as much as possible while implying that it is somehow really effective or damaging feels like a satisfying way to rubber stamp an action sequence.

The most notable and influential use of a move like this in a movie I can think of is the climactic sort-of-kick-thing in the big fight at the end of The-Substitute-but-with-Capoeira flick Only the Strong.

Jackie Chan also spins Ken Lo an absurd amount in the final move of the big climactic fight at the end of Drunken Master II — and it’s one of the superlatives in all those things just described (absurd amounts and climactic fights in particular).

At any rate, it’s pretty clear you need movie-level resources to spin somebody that much — either wire stunts or CGI or both.

Throughout the trailer there are tons more examples that promise copious, expensive battle sequences. In the comments we can discuss how this might be different from the strategy Game of Thrones may or may not have applied in the past to save money on battles by knocking key characters unconscious before they happen so we don’t have to watch them.

The Lots of Horrible Awful Things Happening to People

“What do we do to those who hurt the ones we love?”
“LEAD THEM TO DIE!”

– On-the-nose conversation between this dialogue in this trailer and the music of this trailer.

Corpses being picked at by birds.

Babies being left in the snow.

Various public threats of murder and arson by public officials for various reasons.

Men paraded around in chains.

Saying you are literally in hell and probably being right about it.

Running really hard into an iron portcullis and hitting it with your face.

Some poor dude getting combo bum rushed from three different dark allies all the same time.

The Not Getting the Memo

The main thrust of the trailer seems to be to describe a place where the great mass of people are misinformed about important things. We have revelations of horrible violence and awfulness that was probably eventually going to happen but people are still around and did nothing to prevent it. We have smart-alecky people saying obvious things with the seeming conviction that no one else has thought of them. And of course we have a total miscommunication in the goth/darkwave cowboy music department.

Whatever this show happens to be about, there seems to be a copious amount of dramatic irony happening this season, as all these moments of revelation must to be satisfying come after long moments that don’t make the trailer of people claiming that yes, they did come looking for justice, or that they are scared of some other hell that is not this place they are currently in, or that of course this lady isn’t going to burn her house down in objection to whatever it is that is going to be done to her — except there she goes, and she’s going to after all.

Someone has to to not know before someone else can know-it-all.

Okay, with this in mind, what does this trailer actually have to do with the upcoming story? Let’s talk about it in the comments! There are some pretty big trademark moments and some pretty big implied departures — and even these things we can extrapolate without talking about plot and character when put in the context of the actual story provide additional insights.

Start reading below and find out if the font in the actual books is lit on fire before you buy them or whether all the smoke around the books comes from a smoke machine.

Or read more from… Featured, TV, game of thrones, trailers