2004: I’m lying on the bed in my ratty Allston apartment, thumbing my way through a paperback. My roommate John (no relation) pokes his head in the room.

“Just a heads-up,” he says. “I’m simulating a season in Madden on the PS2, so that’s gonna need to run for fifteen minutes.”

“No worries.” I nod at the Nintendo 64 plugged in to the TV on the dresser. “I’m playing Ogre Battle.” Sure enough, my armies are marching across Gunther Piedmont, moving from waypoint to waypoint, without any input on my part.

2009: Someone shares a link to Sophie Houlden’s The Linear RPG, a Flash game class project. The game, once it loads, features a stick figure traversing a two-dimensional line. Their are two gauges at the top of the screen: hp and exp. You use the arrow keys to move the stick figure to the right and left. As the figure moves right, the hp gauge decrements in random amounts, and the exp gauge increments. When the figure reaches a large dot, hp is restored. After each large dot, your hp starts getting decremented in larger bursts. Once your exp gauge fills, your level increments by one and you get more hp.

Is this an exercise in futility? No – it’s an original fantasy RPG! Your character is wandering the countryside, battling monsters, gaining experience, and recovering at inns. Of course, that story scrolls in barely legible text behind the stick figure, rather than in front. The mechanics – advance to the next territory or retreat to the nearest healing point – are inescapable; the story, difficult to discern. It’s an inversion of the usual RPG setup, like a human with its skeleton on the outside.

Certain behaviors tend to emerge in The Linear RPG: tapping the left and right arrow keys back and forth around a large dot – “orbiting” an inn – in order to build up one’s exp at minimal risk to one’s hp. How is this distinct from level-grinding as practiced in decades of JRPGs – Dragon Warrior, Final Fantasy, and others? The goal is the same: survive a battle at minimal cost to one’s own hp, in order to gain exp (and, usually, gp). 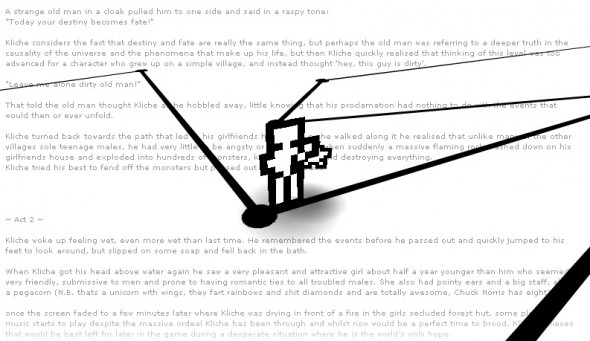 Where JRPGs make combat more interesting is by injecting some tactical choices within each battle. Your character may choose to FIGHT or use MAGIC. They may have ITEMS that boost their abilities or can restore their hp while in the field. But ultimately, every battle has the same goal: whittle down the enemy’s hp before they do the same to you. Since the enemies are uniformly weaker than you are, the greater strategic question is how many enemies you want to tackle before retiring to the inn.

The Linear RPG abstracts all those choices to one choice: advance or retreat.

THE PRESENT (a/k/a THE FUTURE)

2013: Based on positive mentions on Twitter and recommendations in the Google Play store, I downloaded a copy of Tiny Death Star, a mobile/tablet app. Tiny Death Star makes you the general manager of the Death Star, newly under construction. You have to build the battle station out one level at a time, installing residential levels for citizens to live in, commercial levels for them to work in and consume from (service stores like the Millennium Express, food stores like the Mos Espa Cafe, etc), and the occasional Imperial level to do the Death Star’s real work. Building levels costs credits; fulfilling the Emperor’s commands, and citizens shopping at stores, earns you credits.

It’s a game of real-time resource management, similar to Megalopolis or The Simpsons: Tapped Out. You build resource centers that take a short period of time to generate resources. These resources are then cashed in for the in-game currency. This currency is used to build more resource centers. Repeat from the top.

I played the game intently for about a week, recruiting and hiring citizens and stockpiling credits. Then one morning, I found myself frantically logging in five minutes after I had to leave for work. I needed to stock up on Yub Nub in Rebo’s Karaoke, so that citizens could consume those units for the eight hours I was at the office. I didn’t have to restock, of course, but if I didn’t that was a lost opportunity to earn credits, and without credits I couldn’t get more levels, and I needed to build levels to complete more missions, and I needed to– 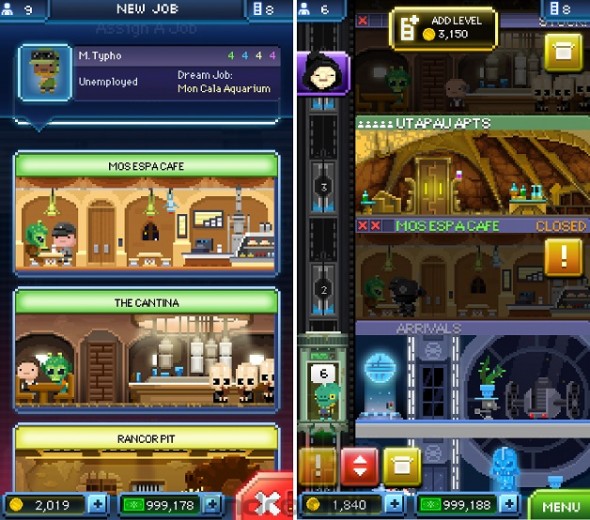 Press all the buttons. All of them.

Viewed from a thousand feet up, Tiny Death Star doesn’t feel like a game at all. There are few, if any, choices to make. When you log back in after an extended absence, the game will flash several action buttons in the bottom left corner. Pressing one of these buttons will take you to the relevant trouble sector – a store that needs restocking, a level that’s been completed, a person who needs escorting up the elevator – and then pressing another button will complete the task.

A button lights up, a sound goes off, you press a button. This isn’t so much a game as it is a flashing toy for a nine-month-old. 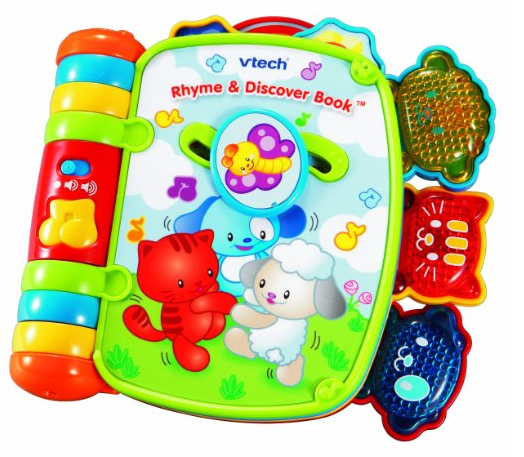 For ages 6 months and up.

Light-up games, like the one pictured above, are meant to teach motor skills, cause/effect relationships, and memorization. They’re not “games” in the sense of poker or Super Mario Bros. or Settlers of Catan, though: there’s no way to lose them. A game like this is a form of operant conditioning: a series of stimuli and responses meant to encourage or discourage a certain behavior. Think Pavlov; think sports drills; think swatting a dog on the nose.

You can play Tiny Death Star for a good long while without doing anything but pressing the buttons you’re told to press. There’s no real time pressure or risk of failure. If the Mos Espa Cafe runs out of Blue Milk, the game will wait patiently until you click on the store and restock it. If you can’t find a Rebel spy in time, the Emperor won’t use the Force to choke you; you just wait until the next spy comes around. You could take years to advance from level to level if you wanted.

Given the lack of a clock or even any competing pressure, Tiny Death Star is more of an exercise in operant conditioning than a challenging game. Button lights up, press the button, get a reward. Warning goes off, acknowledge the warning, address it, get a reward. Repeat until stultified. There’s no challenge to it. The only distinction between someone who’s built a 10-level Death Star and someone who’s built a 100-level Death Star is how much time they’ve invested in it.

Those of you who’ve played a lot of mobile games will already know the punchline. While you’re restocking stores or building levels, you can either wait 30-360 minutes for your work to be completed … or you can pay an Imperial Bux and get the work done instantly. You receive Imperial Bux one or two at a time for completing the Emperor’s assignments. But you also have the option of buying them for cash – not in-game credits, but real cash.

Tiny Death Star isn’t a light-em-up exercise with zero tactical decision-making. It is, like The Linear RPG, a game with one choice: pay to get it done, or wait to get it done.

Co-blogger Stokes wrote about the addictive nature of Candy Crush, and what the pay-to-boost model says about emergent play. But I think there’s more to Candy Crush than Stokes gave the game credit for (or more than I would have been willing to, prior to playing Tiny Death Star). Candy Crush has a perfectly reasonable game experience up until it throws an impossible level at you. There are elements of pattern recognition, time management, and abstract planning involved. There are tactics. Candy Crush can yield satisfaction without throwing money at it (and I should know; I played it for weeks without spending a cent). Stokes says it pretends to be a game of skill, but it is at least that – it’s just not a game of pure skill.

The same can’t be said of Tiny Death Star. Because there is neither an opponent nor a ticking clock nor a diminishing resource (such as hit points) that will undo your progress, there is no pressure in Tiny Death Star. There is no incentive to play other than unlocking certain Star Wars characters, and you can do that by watching Star Wars. Your reward for building the 50th level is an opportunity to build the 51st; your reward for banking 1,000,000 credits is the opportunity to spend them. Everything in the game exists within the game.

By itself, that would just make for an oddly futile experience. But when you add in the money element, it becomes insidious. It’s not as if your reward for spending money on the game is useful, rare, or worthy of boasting about. And it’s not as if doing well at Tiny Death Star could pay off in the real world. Tiny Death Star is a roulette wheel that takes money and pays out in silt.

In this way, Tiny Death Star (and time-management games like it, such as The Simpsons: Tapped Out and Megalopolis) is different from other games where richer players might enjoy more success. Examples include Magic: The Gathering, competitive paintball, and Major League Baseball. Here, a player who spends more money on rare cards, top line equipment, or Jacoby Ellsbury increases their chances of victory. But these games, at least, have a prize associated. Spending money to increase your chance of winning is rational, if a dick move. What do you prove to the world by blowing $20 on Tiny Death Star, other than you had $20 and you don’t know how Gamefly works? 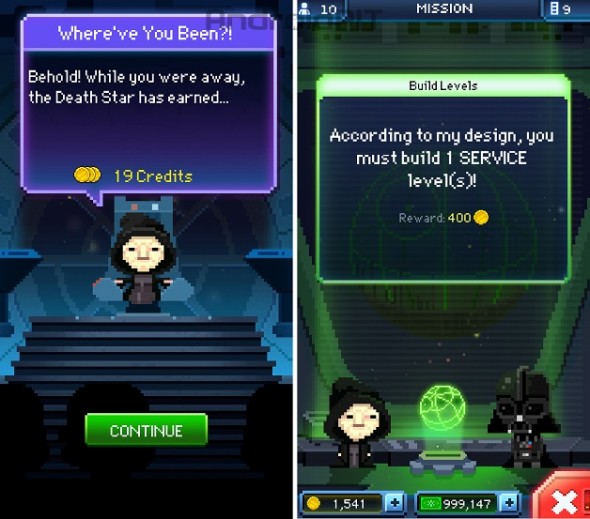 The game seems to be making credits without me, so …

After a while, pushing buttons, then waiting to push more buttons, loses its thrill. This is why the marketplace churns out games like Tiny Death Star, Tapped Out, and Megalopolis so quickly: it needs a new coat of paint on last year’s model. But underneath these games, there’s the same linear model: advance until you lose patience with waiting, then pay to take a shortcut. The game can only proceed in one direction. It took a thought experiment with a Flash project to make that connection in my mind.

When my roommate and I twiddled our thumbs and let our games play themselves back in 2004, we thought we were seeing the future. But our imaginations weren’t rich enough. The future of 2004 was a game that would play itself and charge us for the privilege.