Today, November 19, 2013, marks the 150th anniversary of the Gettysburg Address. In the 150 years since President Lincoln’s famous speech, his words have been parsed and scrutinized enough already, and every Civil War scholar is trotting out yet another tribute to mark this anniversary, so there’s no need for me to add any redundant analysis.

Instead, I wanted to take this opportunity to reconsider everyone’s favorite fictional presidential speech in light of those famous words uttered seven score and ten years ago. I am, of course, referring to President Whitmore’s speech from Independence Day:

These speeches served two very different purposes in two very different contexts. Lincoln spoke to dedicate a cemetery after a costly Union victory; Whitmore spoke to rally his troops on the eve of battle. Lincoln’s war was one of a nation tearing itself apart over its internal differences; Whitmore’s war was one of defense against external invasion.

But both speeches share a number of important attributes: they’re both quite short, and they’re both expressions of optimism in the face of existential danger. They also both reference the founding of America as a new nation based on freedom and equality. This is an interesting rhetorical device, one that reveals a lot about the way our country tells stories about itself. So let’s do a deep dive on how it’s used in both of these speeches, starting with the Gettysburg Address:

Four score and seven years ago our fathers brought forth on this continent a new nation, conceived in liberty and dedicated to the proposition that all men are created equal.

Implicit in Lincoln’s words is that America’s founding brought forth not just a new nation, but a new kind of nation, one based on lofty ideas rather than old tribal allegiances or mere geographical happenstance. Whitmore does the same thing, but goes a step further and makes explicit the violent struggle that brought forth this new nation:

Perhaps it’s fate that today is the Fourth of July, and you will once again be fighting for our freedom… Not from tyranny, oppression, or persecution… but from annihilation. We are fighting for our right to live.

To use the parlance of our modern storytelling culture, both speeches are essentially telling America’s “origin story”: a condensed shorthand version of our beginnings that serves a specific present purpose. Just as a Batman story refers back to Bruce Wayne’s dead parents to remind us why he’s an obsessive vigilante crime fighter, Americans–be they real presidents, movie presidents, or Tea Party advocates–remind us of our original struggle for freedom to justify the current struggle for freedom at the fundamental level of our national character. It’s what we do as a people. It’s intrinsic to us.

But when I say that an origin story is condensed shorthand, I also mean that it’s highly reductive. There’s no room for careful consideration of things that undermine the clean narrative of the principled fight for freedom, such as the conquest of Native Americans by European settlers and the skepticism that some of the Founding Fathers expressed towards the idea of democracy.

This is inevitably what happens when a collection of events becomes an origin story: it becomes more than a recounting of what’s already happened; it becomes a justification for current actions. And in the process, a lot of important stuff gets left behind.

I say this not to belittle or criticize the usage of the American Origin Story in the context of either the Gettysburg Address or Independence Day. Neither tells a lie; both tell a collection of truths that serve the current struggle, be it the war against the Confederacy or aliens. But I do say all of this to remind us of the need to step outside of the confines that our most powerful narratives reside in. Things like action movies and Wikipedia summaries of entire wars depend on shorthand understanding, but if we always limit our understanding of the world to that level of simplicity, we’re missing out on a lot. If we consider Bruce Wayne’s reaction to his parents’ murders as a healthy, rational response, then we’d need to reconsider our assessment of the human psyche. If we consider President Whitmore from Independence Day as a fully formed portrait of American leadership in a time of conflict, we’d need a swift punch and a stern admonition along the lines of, say, “welcome to earth.” And if we consider either the Revolutionary War or the Civil War as pure ideological struggles, then we miss out on the complex societal and economic factors that were at play in those conflicts and are, in some ways, still at play today.

And here’s the great thing: having a deep understanding of the complexities of our most powerful narratives actually enhances, not detracts from, their power. If you’re a longtime reader of Overthinking It, you already knew that. If not, well, know that when we nitpick Independence Day, Batman, and, well, American history, we do so because we love them for what they are, good and bad. We celebrate Lincoln and his actions during the Civil War not in spite of, but because of his own flaws and the impossibly difficult circumstances of the times. We celebrate Whitmore and his bombast not in spite of, but because of the ludicrous set of events that surrounds his speech. And should we remember the examples of both of these presidents, real and fictional, then perhaps this government of the people, by the people, for the people, shall not go quietly into the night. It will live on. It will survive. It will celebrate its Independence Day…again, and again, and again. 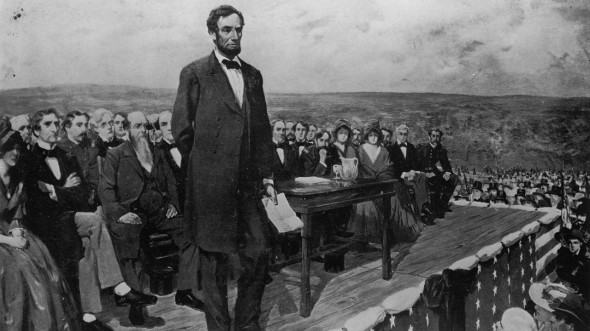 5 Comments on “From Gettysburg to Area 51: A Study on Presidential Speechmaking by Presidents Lincoln and Whitmore”