It’s finally here—just over 25 years since it’s release as a novel, Ender’s Game is hitting the big screen. Matt and I have been hitting the book from every angle that we could think of, but of course left a lot to be discussed, so head over to the forums and sound off.

The one thing we deliberately didn’t spend much time doing is talking about the movie adaptation. This was largely deliberate. First, we hope that the Book Club podcasts will be “evergreen”: that they will still be enjoyable down the road, when the movie is old news and new readers are picking up the book for the first time. Second, there’s something valuable in looking at a text on its own merits, instead of speculating what the machine that is Hollywood is going to do with it.

But, like a swarm of angry Formics, the hive mind that is Hollywood is going to do its thing, and Ender’s Game The Movie is now a reality. Like many long-time fans of Ender’s game (and like long-time fans of any eagerly awaited adaptation), I approach the release with mixed emotions. On one hand, I’m excited to see what a massive VFX budget and top-notch casting can do with the story that I’ve come to love.

On the other hand, I’m worried that all the VFX in the world can’t make up for the compromises that have to be made in order to get a movie made.

So in the spirit of Overthinking It, here’s a score card of what I’ll be looking for when I sit down to watch Ender’s Game this weekend:

In many ways, the Battle Room is Ender’s Game. According to Orson Scott Card, the story began as a question of “How will we train people for battle in space?” The Zero-G battle room was his answer to that question. 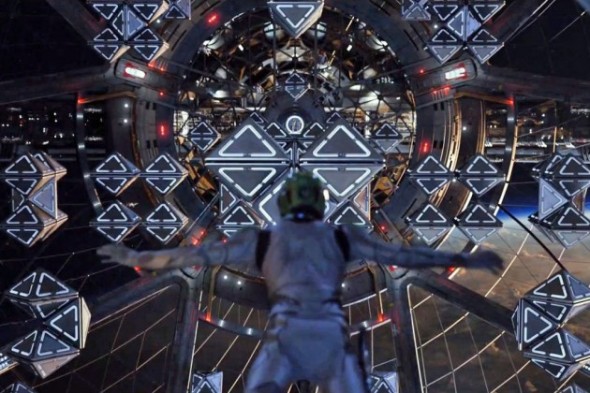 That said, everything I’ve seen so far in the trailers/marketing makes me think that this will be done well. I like the choices they’ve made in the visual design, and apparently they spent a lot of time making sure that the zero-G movement looked convincing. In particular, I’m loving the fact that they used former Cirque du Soleil performers to train the actors.

What will I be looking for specifically? Two things.

First, I’m worried that the fight will be too clean, too sanitized. One of the things that distinguishes this fight and this book is the level of violence that it’s willing to place at the heart of the book. This is not a school yard fight, and it would be a mistake for the adaptation to portray it as one.

Second, in the book, we get access to Ender’s inner thoughts, and his justifications for what he does to Bonzo, and we are still left somewhat unsure of whether these justifications are morally sufficient.  I’m hoping that the movie doesn’t “whitewash” this fight, and lessen Ender’s moral culpability for his actions

I already warned you once, but here it is again: Spoilers ahead.

Ender’s Game is defined by not one by two twist endings, both of which are crucial to making Ender’s Game anything other than a Starship Troopers knock-off. I’m very much hoping that the movie effectively preserves both of these twists for non-book readers.

First, of course, we have the “It’s been real that whole time” reveal—that what Ender believes to be his “final exam” at Command School is, in fact, a real war that wipes out the Buggers for real.

I’m very skeptical that the movie will effectively hide this twist from non-book readers. The marketing has in many places telegraphed what’s going on, and the “hi-def” of the space battles will, I fear, mean that people will find it very easy to see what’s really going on. 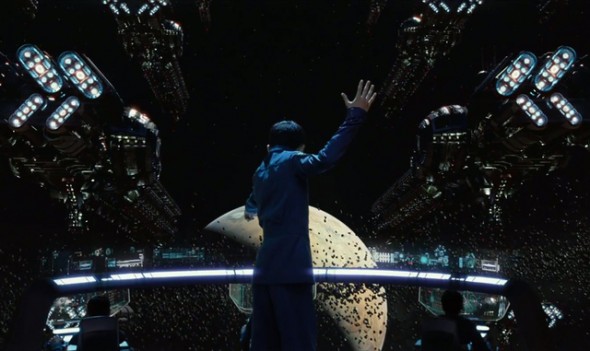 In particular, I’m excited to see the exact moment where it’s revealed. In the novel, the moment where Graff and the other Generals, previously stoic and reserved, break down in tears, preying and cheering, is deeply affecting. I am really hoping that that moment is included, and that it it’s effectively portrayed.

Second, and possibly more importantly from a thematic standpoint, there’s the reveal on the colony world that “The Buggers were never coming back,” that the whole Third Invasion was unnecessary, and everything Ender fought for was a mistake.

While this reveal definitely has not been telegraphed by the marketing, I’m curious to see how it will be revealed. In the book, it’s done largely telepathically, and there’s virtually no action that can be shown to demonstrate the import of what’s been revealed.

If the movie wants to succeed, it will have to do (at least) all three of those things well. There’s one more thing I’ll be watching for:

It’s difficult to imagine that they’ve greenlit a big-budget VFX movie like Ender’s Game without at least SOME possibility of a multiple-movie payoff down the road. This is a challenge, though, because none of the sequels to Ender’s Game are anything remotely like the original novel: No Battle Room, no Space Battles. I’ll be very curious to see whether, and how, the movie sets itself up for a sequel.

The focus on Ender, and a few shots from the most recent trailer, make me think that it will likely be pointing towards Speaker for the Dead, which, unless completely overhauled, is essentially unfilmable. It just doesn’t have the quality or quantity of action that would be needed to sustain a franchise.

So any hints they leave behind in the movie will be extremely interesting to see.

What will you be looking for? Sound off in the comments, or head over to the Book Club forums!

7 Comments on “EnderThinkingIt: The Adaptation’s Gate is Down”