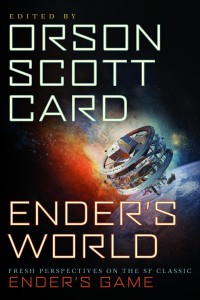 The good folks at Smart Pop Books (Smart? Pop? Seriously—this is a publisher after our own hearts!) got in touch with us about the Overthinking It Book Club reading Ender’s Game.

It turns out they publish a volume called Ender’s World: Fresh Perspectives on the SF Classic Ender’s Game

, which is a collection of essays examining the novel from a variety of perspectives: its literary technique, it’s critical significance, its influence, it’s effects on readers. One of the Amazon reviews begins, “Too Much Analysis. Much Too Much.” So you know it’s right up our alley.

The publisher was kind enough to offer us a free copy for an enterprising Overthinker, and we wanted to make it easy for you to get one.

Do this before Saturday, October 26, 2013, because that’s when we’ll check our Twitter feed and pick a random participant to receive Ender’s World. You should have your book in plenty of time for the November 1 release of the movie.

And don’t forget to follow the Book Club posts and subscribe to the podcast in iTunes (or with RSS). Only two more installments left before we leave the book and head to the movies.